Image by Aditya Romansa, via Unsplash. 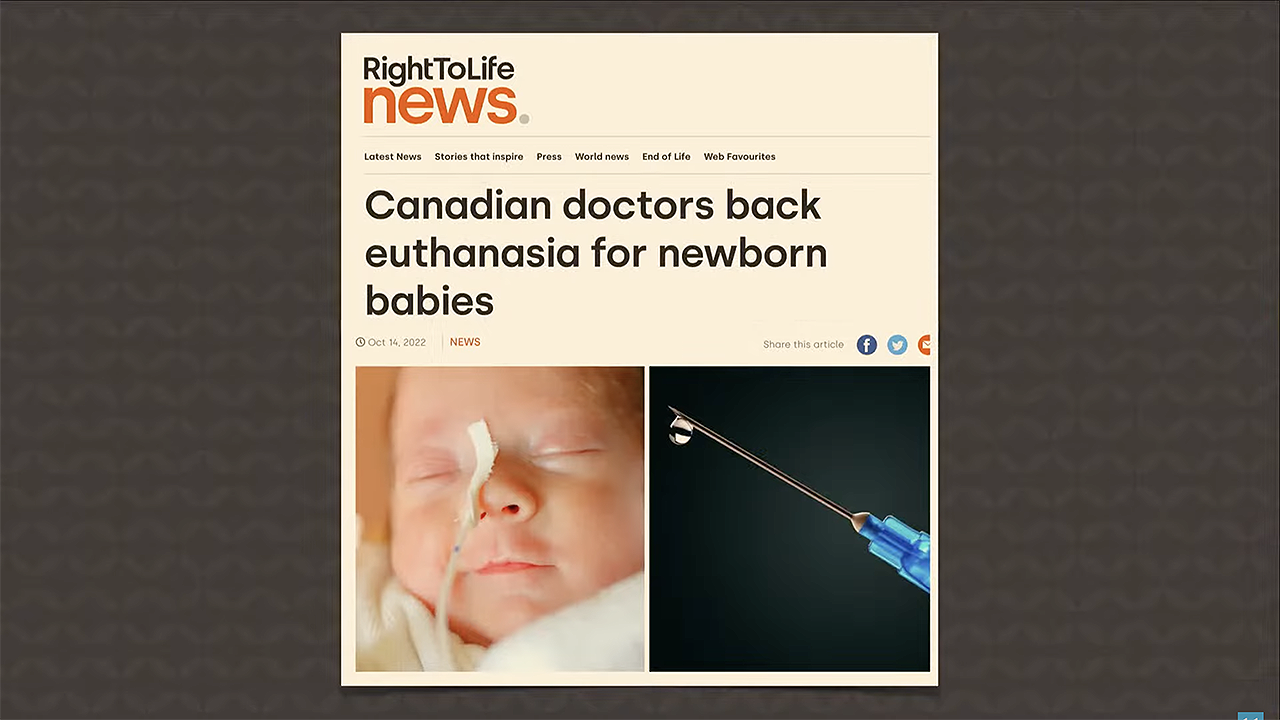 Should “severely disabled” newborns be killed by doctors? A group of physicians in Canada thinks so. A doctor representing the Quebec College of Physicians recommended to a special committee that the parents of babies born with “severe deformations” and “very grave . . . medical syndromes” should have the option of Medical Assistance in Dying (MAID) for their babies.

In Canada, abortion is legal for any reason up until birth and is paid for by public health care (taxpayer dollars), so this recommendation to allow parents to request the death of their newborn is hardly surprising. But why only “severely disabled” children? (And who defines “severely”?) In their wicked worldview, a child can be murdered (and that’s what it is—murder) up until birth for any reason, so why can’t a newborn likewise be killed for any reason? After all, the only difference between a newborn and a full-term baby is that one baby has passed through the birth canal and the other hasn’t! Why should that be the difference between life and death?

Of course, in a biblical worldview, we can say both the killing of unborn children and of those who have been born is absolutely evil. A child, no matter the age (from fertilization on), level of development, location, or level of ability is a person made in God’s image (Genesis 1:26), who has been given life by him. We don’t have the authority to end an innocent life!

A child, no matter the age (from fertilization on), level of development, location, or level of ability is a person made in God’s image (Genesis 1:26), who has been given life by him.

We can compassionately support and grieve with families that have a child suffering with a severe disability or a grim prognosis without allowing them to kill their child. Instead, we can point them to the reason there is suffering—because we live in a world broken by our sin—and also point them to the solution to our suffering: the Lord Jesus who offers us eternal life with him in the new heavens and new earth where there will no longer be any death or suffering.

Careening Down a Path of Destruction

This recommendation to allow euthanasia for babies under one (and why that arbitrary age?) is also not surprising because this is the very thing pro-life advocates have been predicting. Euthanasia is a slippery slope. As soon as the door opens to kill a particular group of people (in the name of “choice” and compassion, of course), it will only get kicked open even wider. A culture that doesn’t value certain lives ultimately won’t value any life.

And this recommendation to expand the boundaries of who is eligible for MAID—a program which accounted for 3.3% of all deaths in Canada last year and saw a 32% increase that same year—isn’t the only change (or potential change) happening with Canada’s euthanasia program. Consider:

Unless there’s a major worldview change, Canada (and the rest of the West) will only continue to careen down this slope of devaluing human life in the name of “choice” and “autonomy.”

Unless there’s a major worldview change, Canada (and the rest of the West) will only continue to careen down this slope of devaluing human life in the name of “choice” and “autonomy.” Why? Well, because Canada is dominated by the religion of humanism. In this view, man is all there is, humans are just animals, man is accountable to no one but self (man is his own god), and personal autonomy (“I can do whatever I want!”) is the highest virtue. So, humanists will continue to legalize anything and everything that gives people “autonomy” no matter how evil, abusive, and deadly it is!

But man is not all there is. There is a God who will hold every person accountable; and while you have the free will to do whatever you want, you will ultimately be judged for your choices unless you repent and allow Jesus’ sacrificial death on the cross to pay your penalty of death for you. Turn to Christ today!

This item was discussed Monday on Answers News with cohosts Bodie Hodge, Dr. Jennifer Rivera, and Bryan Osborne. Answers News is our weekly news program filmed live before a studio audience here at the Creation Museum and broadcast on my Facebook page and the Answers in Genesis Facebook page. We also covered the following topics:

Watch the entire episode of Answers News for November 7, 2022.