“I Had an Abortion and I’m Not Apologizing” 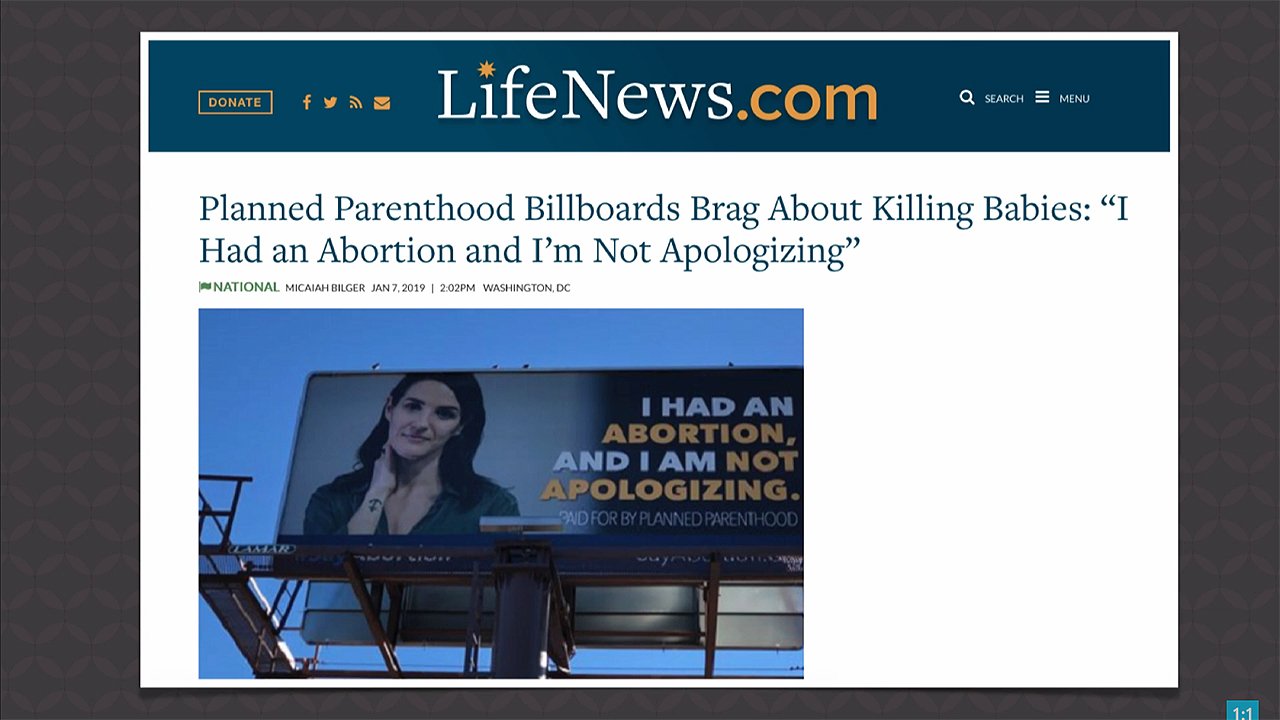 One woman who participated in this campaign said, “I joined the #SayAbortion campaign because abortion is normal, abortion is health care, and I will not apologize for putting my life first.” Now that’s essentially an admission she sacrificed her child to the god of self!

Another woman wants to make the conversation about abortion “as easy as talking about a colonoscopy,” as if a doctor checking to ensure nothing is going wrong in a patient’s colon is the same as violently murdering a human life within the safety of his or her mother’s body. What depravity we see these women stooping to!

A third woman claims she knows the “joys of motherhood” because she probably would not have the kids she now has if she hadn’t had one of her children murdered. Oh, such evil we see around us!

Abortion is nothing less than the sacrifice of unborn children to the god of self.

Their billboards should state "I murdered my child and I'm not apologizing" or "I sacrificed my child to the god of self and I'm not apologizing.” As I have stated many times, abortion is nothing less than the sacrifice of unborn children to the god of self. The one woman’s statement that she put her life first clearly illustrates that. She selfishly chose to live the life she wanted at the expense of her own child’s life. This should wrench our hearts as it does the Lord’s: "The Lord hates . . . hands that shed innocent blood" (Proverbs 6:16–17).

We're in an increasingly sick and depraved culture where people and organizations try to normalize sinful behavior such as abortion, same-sex relations, gender fluidity, and euthanasia, as generations brainwashed in evolutionary naturalism infect society with their belief that man is his own god.

Here’s what I would say to these women who aren’t apologizing or feeling ashamed of their murderous actions: what you need is not just the feeling of sorrow or shame you refuse to feel. You need genuine repentance and to humbly kneel before our Creator and Savior.

Someday, these women will stand before God and be held accountable for their actions, including for the life of the child they so easily discarded. But they don’t have to receive God’s well-deserved wrath and judgment (which is what every single person rightly deserves for their sin, whatever that sin may be) for their abortion (Romans 8:1)—they can repent and trust in Christ. Then their guilt will be removed (Acts 3:19) because the sinless Christ bore it for them (2 Corinthians 5:21)! If anyone trusts in Christ, they will stand before God clothed in a righteousness (Isaiah 61:10) they don’t deserve and didn’t earn (Ephesians 2:8–9)—a righteousness that comes only because Christ took our place, dying on the cross, and rising from the grave. I urge those women—and everyone else—to repent and believe the gospel today.

These women need to know that when they do genuinely repent and ask for forgiveness before the living God, God promises he “will remember their sins no more” (Hebrews 8:12).

Watch the entire episode of Answers News for January 17, 2019.