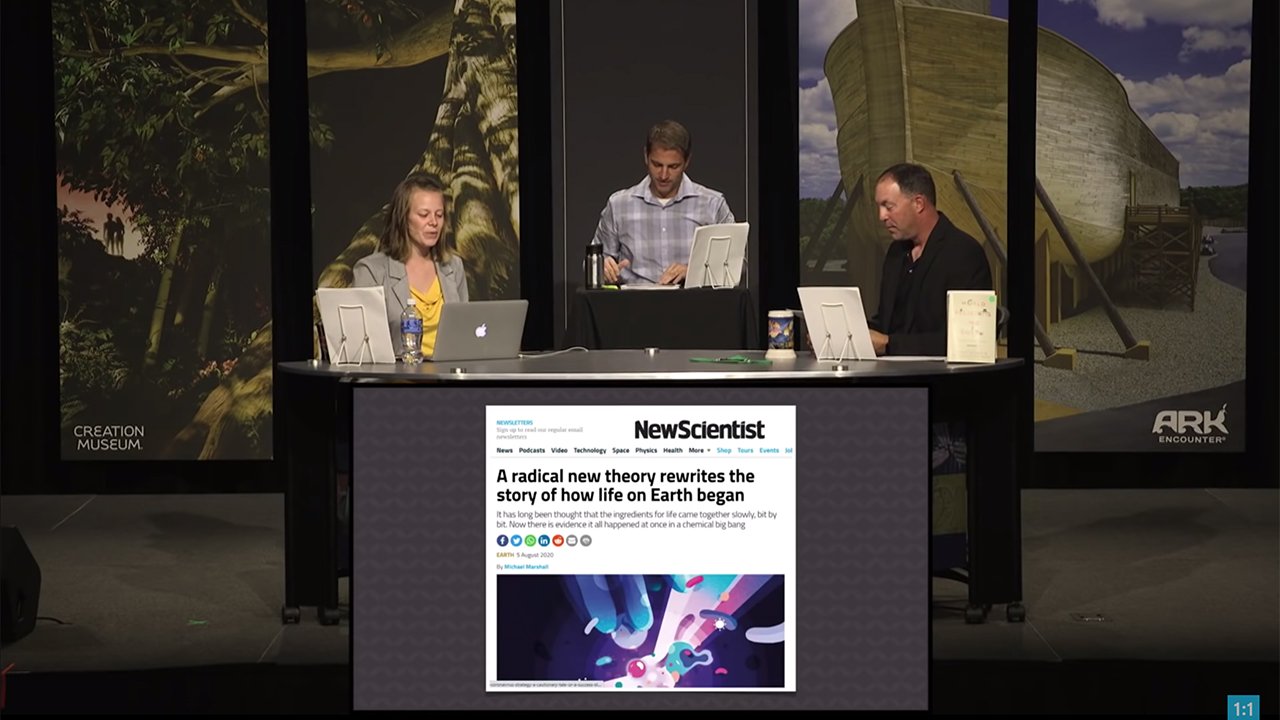 For decades scientists have debated when, how, and where the first life supposedly evolved. Various hypotheses abound: maybe RNA came first; perhaps life evolved around hydrothermal vents; maybe life arrived on an asteroid—but none have satisfied everyone, due to significant problems with each one. And now an old idea has been revived and refined: maybe there was a “chemical big bang,” and life arose spontaneously in a river, with all the major components in place all at once.

As this article from New Scientist states,

It has long been thought that the ingredients for life came together slowly, bit by bit. Now there is evidence it all happened at once in a chemical big bang.

In other words, it used to be that life evolved so slowly you couldn’t see it happening, and now it happened so fast we missed it!

The article explains that life requires, at the bare minimum, “three core systems”: an outer membrane, the ability to metabolize, and the ability to reproduce using genes. Chemical evolutionists have a problem when it comes to trying to explain the origin of life—you need all three of these systems at the same time for life to even be imaginable. So scientists have argued over which came first, but now some say all three came at the same time. That’s a pretty fortunate set of circumstances!

In other words, it used to be that life evolved so slowly you couldn’t see it happening, and now it happened so fast we missed it!

The scientists correctly define what you need for life—something to contain it (membrane), ability to make/utilize energy (metabolism), and ability to reproduce. They’ve given up on bacteria being the first living organism because they know how complex even these “simplest” organisms are. Since none of their other ideas about which came first have panned out, they’ve decided that all three requirements for life must have evolved at once from “Goldilocks chemistry.”

Just like Goldilocks is a fairytale, so is their idea for the origin of life!

The popular summary of the study concludes with,

Of course, all this depends on the everything-first idea proving correct. Szostak’s protocells and the new biochemical insights have won over many researchers, but some pieces of the puzzle are still missing. Perhaps the most persuasive argument is that the simpler ideas don’t work. As is the case with many things in life, the beginning was probably more complicated than we had thought.

So the strongest support for this origin of life story is this: that the alternatives don’t work? Maybe that’s because life didn’t arise by natural processes! Really, their story is nothing more than a “just-so” story because they have to somehow explain the origin of life without God. They’d rather put their faith in the unbelievable—that something as complex as life could just pop into existence—than put their faith in the One who made them. And not just any “One,” but the only One true God: the Creator God of the Bible.

And information systems don’t just pop into existence. Information only comes from other information and, ultimately, a mind (in this case the mind of the Creator).

Life shows the fingerprints of the Designer. Just consider one of the three categories for life—the ability to reproduce using genes. This requires an information system to code the instructions needed to assemble life. And information systems don’t just pop into existence. Information only comes from other information and, ultimately, a mind (in this case the mind of the Creator).

This item was discussed yesterday on Answers News with cohosts Avery Foley, Bryan Osborne, and Bodie Hodge. Answers News is our twice-weekly news program filmed live before a studio audience here at the Creation Museum and broadcast on my Facebook page and the Answers in Genesis Facebook page. We also covered the following intriguing topics:

Watch the entire episode of Answers News for August 19, 2020.