Mike Wild believes that everything a Christian does should be worship of the Creator God, and scientific research is a prime example. He and his wife, Libby, have made that truth central in the education of their four boys, ages 9 to 15.

As a new Christian, Mike answered God’s call to carry the gospel to a hard mission field while he was still young and strong. That began a journey from studying marine biology in Florida to translating the Bible in the mountains of Papua, Indonesia. Yet through it all, he never lost his love of biology.

Today the Wilds, along with their partners, the Tim Ingles family, live among the seminomadic Wano people, deep in Papua’s interior mountains. They first learned the language and then developed a literacy course for the Wano people. Now they are translating the Bible into their language. In 2008 Mike and Tim taught the people step-by-step through the Bible from Creation to Christ in three months of daily sessions, and about seventy people enthusiastically believed. From that beginning, a church has been established.

Along the way, God has used Mike’s love of science and nature to enhance and broaden the family’s ministry. Mike describes the Wano territory as an “amazing corner of the world where there’s never been a scientist or a naturalist.” One advantage of this exotic locale is that their missionary home is always full of interesting research subjects—that is, bugs. 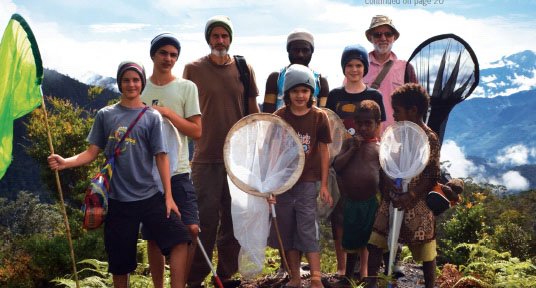 The beauty and intricate designs of their uninvited houseguests fascinate Mike and his boys. Since 2008, they have collected thousands of butterflies, moths, beetles, and other insects. They’ve even catalogued some insects previously unknown to scientists. One moth species has been named after the family, and another was officially named after their village. And the villagers have begun to take notice.

Living far from video games and TV, the Wild boys spend most of their free time out in the jungle with friends, exploring and looking for new insects and mammals they’ve never seen before. Their enthusiasm for field science—combined with their evident love of the Creator who gave us such infinite variety—rubs off on their tribal friends. It’s a wonderful synthesis of science and evangelism.

There’s no creation-evolution debate in the jungle. But the Wano people live in superstitious fear that fickle spirits, not the Creator God, control every aspect of nature. When someone dies, villagers sometimes even uproot the whole clan to escape the evil spirit they believe they have angered. But as they learn of the Creator, they realize that they don’t need to fear spirits.

Mike and Libby are taking advantage of every opportunity to use their unique experiences to spread the gospel. In 2011, the family created a video curriculum called Growing up Wild to educate kids in the West and get them excited about modern-day missions. The video series features the four Wild brothers and their lives growing up as missionary kids among a remote tribe.

Photo on left: Kian (son #3) mounting some of the butterflies the boys collected.
Photo on right: Mike with Liku, one of his closest Wano friends.

The Wilds’ scientific field work has also enlarged their ministry. They are beginning to meet Western scientists as a result of their efforts to catalogue wildlife. Being able to talk intelligently about their specialties opens opportunities to form relationships with scientists and reach them with the gospel. Mike was recently blessed to see his oldest son, Morgan, share the biblical view of creation with a scientist who spent several days with them.

The Wilds recognize that worship isn’t confined to a church song service. Mike tells his boys that worship means “giving worth,” and he encourages them to share God’s worth through all their interests. The possibilities know no bounds at the Wild home. For instance, the brothers have begun planning their next video series, this time focusing on apologetics.