The Things that Are Not

Meet a Scientist Whose Work Involves High-Precision Photographic Enlargements of a Microscopic World We Seldom See.

'I distinctly remember when I was infected with the microscope bug’, recalls research scientist Mark Armitage.

Mark Armitage talks with Tas Walker about “the things that are not”.

“I was 16 and had spent my summer vacation at a marine science station, examining tiny planktonic algae.” After that, microscopes and the microscopic world became his life passion.

Over the years, he has worked for world-famous microscope manufacturers: Zeiss of Germany, Olympus of Japan, and Reichert of Austria. For the last 18 years, he has run his own microscope/consulting company, Micro Specialist, in Los Angeles. 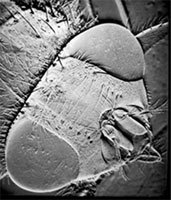 Compound eyes of a fly are made of thousands of individual optical units (ommatidia) precisely arranged—exquisite miniature design.

Mark likes to call the tiny objects in his microscopic world “the things that are not”, borrowing a phrase from 1 Corinthians 1:28. They remind him of an overriding theme of Scripture—that the Creator God delights in using small things to conquer the strong and powerful.

Mark has aimed his magnifying lenses at many things. The list is almost endless, and includes the fields of botany, microbiology, medicine, materials science, forensics and geology. Mark is never disappointed by what he sees with his microscopes.

He remembers the time he stood in an operating room and used a surgical microscope to study a live human brain. On another occasion, at the Kennedy Space Center, he examined the vibrant image of astronaut blood. He also recalls working in a hyper-clean environment at IBM and looking at semiconductor wafers.

Mark has always loved science and showed a strong aptitude for it. But he has not always been a Christian or a creationist.

He was born in Chicago, and for his first 15 years lived in Latin America. His family was Catholic, and he spent all of his primary and secondary school years in strict Catholic schools.

“I really tried to be a good Catholic,” Mark explained, “but my life was wracked with sin. I did pretty much anything I wanted to during the week, as long as I was in the confessional on Saturday and Mass on Sunday.” When he enrolled at the University of Florida, his life became even worse. He stopped going to Mass and became a heavy drug user.

Fortunately, things changed when some of his friends trusted Jesus Christ as God and Saviour, including a friend who invited him to church. Mark recalls, “The gospel message preached that day hit me like a baseball bat! I was in a fog for a week. One of the college leaders came to my apartment and showed from the Bible how I could never earn my way to Heaven by good deeds, penance or ritual. A week later, I surrendered my life to Jesus Christ and was baptized.” His transformation was so great that his family was amazed! 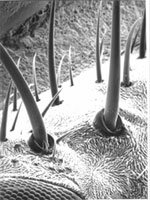 Even the hairs on a fly show precision engineering.

Although Mark had become a Christian, he heartily adopted the theory of evolution because he thought “no scientist questioned evolution”. But his classes at Florida bothered him. The professors ridi­culed the Bible, and he saw how they demeaned creationists.

Mark wanted a career in science, so to satisfy his inner doubts he secretly tried to mix what the Bible said about creation in six days with deep geologic time. He assumed that God probably used evolution in some way, but it never really made sense to him. So for years he simply ignored it.

When he moved to California in 1984, an engineer at his church asked him to help with showing the Origins film series, which explained how science fitted with the Bible. That was a life-changing experience, Mark explained. “The scientific content in those films absolutely floored me!” He became so hungry for information on the scientific basis for creation that he bought almost every book available. The film The Genesis Solution was particularly life-changing, as was Ken Ham’s book The Lie.

Mark says the changes in his outlook and new zest for life demonstrate that what you believe about where you came from affects your whole world-view.

After this, he made a point of visiting Christian schools and colleges to demonstrate his microscopes. Understandably, he was excited to share what he had learned about the scientific evidence for creation. He came to know the biology and science department heads at these schools, but, to his surprise, he discovered that they most strongly believed in evolution over millions of years. He can recall only one Christian university that held to creation in six days 6,000 years ago. “I know folks might be upset to hear this,” Mark explained, “but I would urge parents to carefully question the department heads about creation in six literal days before they enroll their children in a Christian school.” 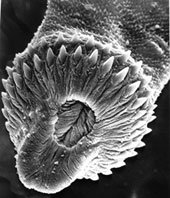 Gruesome sucker and mouth of parasitic worm, now harmful to humans because of the Fall.

For Mark, the microscopic world contradicts evolution. “Of every experience that I have had in microscopy, no matter the discipline, no matter the venue, one thing has become clearly resolved in my mind—microscopic things, or “the things that are not”, nullify the pillars of evolution.”

Mark explained: “Evolution is a structure supported by two main pillars—chance and deep time. Without millions of years of time, evolution does not have a hope, because large-scale changes from one body plan to another cannot occur quickly. And chance is essential, otherwise evolutionists would have to acknowledge intelligent design, and that implies a master-designer.”

In the microscopic world Mark has seen abundant examples of design—of complex objects that could never have formed by chance mutation and natural selection:

Fungal cell of a lichen is as complex as a huge modern city, but miniaturized.

These, as well as innumerable other examples, reduce the pillar of random assemblage to rubble. Mark ponders, “Evolutionists need to realize that chance is not their creator so they can come to know their God through faith.”

Also, Mark has seen the pillar of deep time toppling beneath his microscope. He has found radiohalos (minute spheres of discolouration) of short-lived radioisotopes in biotite in granite. These show that granite rocks (a major component of the earth’s crust) formed suddenly, maybe within days or minutes. He has even found such radiohalos in diamonds.7 He has been involved with other research, which found that moderate heating erases radiohalos.8 Mark mused, “Radiohalos are evidence that granite did not take millions of years to form and may have formed at much lower temperatures than previously envisaged.”9

Some recent exciting microscopic work has focused on zircon minerals (ZrSiO4)—tiny crystals in biotite from granite.10 Scientists discovered these crystals contain a large proportion of helium, which is a by-product of the radioactive decay of uranium.

Why would helium in zircons be significant to the age issue? Mark explains: “When my electron microscope develops a vacuum leak, the technician pumps it full of helium. Helium is so ‘slippery’ that it readily escapes through the tiniest leak. So, using a helium gas detector, the technician can easily find the leaks.”

When we apply this to the zircon crystals, we see that helium will quickly diffuse out. Indeed, the rate of diffusion of helium from zircons is quite high. Why, if the crystals are supposedly billions of years old, do they still contain lots of helium? The only logical conclusion is that these zircons are not billions of years old. In fact, calculations based on the amount of helium still inside the zircons indicated their age is only 6,000–8,000 years.11

Mark is excited at how creation ministries are affecting the world today, and that his work with microscopes can play a part. “God has once again chosen ‘the things that are not’ to nullify the things that are! Just as David conquered the giant Goliath with a small stone, God is using ‘insignificant’ microscopic things to smash the pillars of evolution.”

Left: These radiohalos in mica are spheres of colouration caused by decay of radioactive material at their centres.

Right: Human red blood cells, or erythrocytes, are about 7 µm (micrometres, 1 µm = 1/1000 of a mm) across and look like a cake depressed in the middle.