AiG recently learned about an effort in Paris that could help plant the seeds for ‘revolution’ in France—and all over Europe. 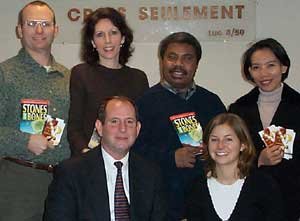 AiG recently learned about an effort in Paris that could help plant the seeds for “revolution” in France—and all over Europe.

Tom Oeffinger, an American businessman who works for a Fortune 500 company, has been preaching on Sundays and has just finished hosting a Bible study in Paris on Tuesday nights—with AiG materials and our video series Answers … with Ken Ham. This unique “answers” ministry is reaching key leaders from numerous countries.

“I am not at liberty to share with you their names (some of the Bible study attendees are in sensitive positions within their governments),” he told us, “but there are ten that consistently attend, representing six countries. The life application of what they are learning is making an impact—not only on their lives, but also in their countries—because they are sharing their knowledge.

“After much prayer, we decided to present Genesis using Answers … with Ken Ham. It really struck at the hearts of the people and we can really see the growth! They have ‘consumed’ all of our AiG magazines, ‘questions’ series booklets, and are now into our book collection.”

“But they need more. They want to know how to answer the difficult questions—to present the facts to combat the errors of the high ‘thinkers’ of evolution—to make a positive impact on their family, friends and government back home.

“We are so excited about the opportunity to be a part in laying His Foundational Truth in the hearts of others. Thank you for any assistance that you can give. Please remember us in prayer. Your Brother in Him,
Tom”

Among the materials that Tom requested was AiG’s new Project 3:15 CD, which, he said, “I would like to share with pastors throughout France.” With the help of supporter donations, AiG was able to send him a large shipment of complimentary copies of this CD-ROM, along with other books, booklets and CD-ROMs.

Tom wrote back with a wonderful testimony of God’s sovereignty:

“Your material arrived one hour prior to our last study (God’s perfect timing!). I wish that I had a video to share with you their reaction to your gift.

“In this Christmas season, your gift is being distributed throughout Paris through the hands of people wanting to make an impact for Him—the sharing of His Truth by people with a heart, to people that are questioning. The attendance of the study is of an international nature, so the impact of your gift will be felt around the world. Thank you for your generosity.”

What a blessing to plant the seeds of Biblical revolution in men’s hearts! Upholding the truth of God’s Word about Creation and the Fall opens the door for men to receive God’s promise of salvation through His Son, Emmanuel.