The Creation Bus ... and Us

The Creation Bus travels around rural Australia for around eight months of the year. The crew consists of Peter Sparrow (a science teacher with a biology degree), his wife Cathy, and their son Daniel.

The Creation Bus has been travelling the roads of Australia for almost four years. What an exciting and different lifestyle the Lord has led us into! We've seen desert, thick rainforest, hundreds of kilometres of saltbush with no trees, as well as snow, drought, fire and floods. But best of all we have met many wonderful people in God's family, bound together by our Heavenly Father.

We travel as a family, Peter, Daniel, and I (Cathy). Daniel is 10 years old and is being home-schooled as we travel. He attends a Christian school when we are home in Adelaide, South Australia. He seems to be thriving on this lifestyle, and his teachers at school are very pleased with his progress (especially in Australian geography!).

Both Peter and I are licensed to drive the bus, but Peter drives more often. I help Daniel with his school work while we travel. Peter takes him for science lessons, and it is not uncommon to see Dan and Peter deep in discussion about some scientific topic as we travel along.

We have had our share of mechanical problems with the bus, but Peter has always been able to repair it on the side of the road, or we have been somewhere where someone could fix it.

A Bible verse that means a lot to us is Isaiah 42:16, in which the Lord says He will lead 'the blind' by ways they have not known, along unfamiliar paths, and will turn the darkness into light before them, and make the rough places smooth … He will not forsake them. We know the Lord is watching over us—there have been many times when we have proved this. Recently we had a fuel leak, an oil leak and a fire all within 24 hours. But we still made it to the meeting on time!

Audiences vary from hundreds of people down to one small family. One memorable meeting had an audience of three people and a dog. Another had 12 people and about one million insects. The venues also vary greatly. I remember a tiny room built to hold a dozen people with 30 crammed into it. Other meetings have been in a gymnasium, a badminton hall with two possums crawling on the rafters above Peter's head as he spoke, and a church in the Northern Territory which had two owls in the rafters but no walls.

Creation on the road!

The Creation Bus travels around rural Australia for around eight months of the year. The crew consists of Peter Sparrow (a science teacher with a university biology degree), his wife Cathy, and their son Daniel. Their visit to, and meetings in, each centre are arranged by a local contact person in each visited town. The bus is a mobile home and carries books, videos, and equipment for meetings. The brightly coloured bus with a dinosaur on the side attracts interest wherever it goes, and thousands of people have had the opportunity to hear the evidence of creation and the truth of God's Word because of it. The bus has been on the road for around four years now, and has so far reached people in about 400 towns.

In one small outback town the town generator went out during the meeting—it was so dark we couldn't see our hands in front of our faces. The 15 people chatted and made jokes while our host (the generator manager) went to turn the power back on.

Some people ask us, 'Is it worth it, giving up so much and being away from home and other family members and friends for so long?' To answer that I will tell you some anecdotes from our travels.

As well, numerous people tell us they would have invited all their friends and promoted the meeting more if they had known how important the message was.

Some of the positive comments we have heard:

Often people ask us about dinosaurs. 'They didn't exist, did they?' many people ask. There is a lot of confusion in the churches about many of these things. It is great to tell them that dinosaurs were created in Creation Week like the rest of the animals, and that dinosaurs were as special to God as kangaroos or sparrows.

A women spoke to us one day and told of her efforts to get her nieces and nephews to attend the creation science meeting. Her sister had told her, 'My children don't believe in evolution, they don't even know what it is'. 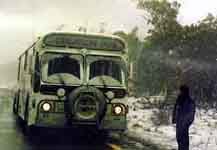 The Creation Bus crew has seen snow, drought, fire, and flood while taking the creation message to country towns around Australia and New Zealand.

When asked if they knew what evolution was, the children said no, but when asked if they'd heard about men coming from apes, they all said yes, and that it happened millions of years ago. The mother was horrified. As far as she knew, her children had never been taught evolution—they were Christian and she did not believe in evolution either. Yet the children had already been indoctrinated without her even knowing.

A young boy from a Christian family was looking at one of our dinosaur books and wanted to buy it. His mother said he already had plenty of books about dinosaurs at home. I asked him if his books showed dinosaurs and men living together and dinosaurs going into Noah's Ark. He said, 'No way, dinosaurs died out millions of years before men were around'. When I told him that is not what the Bible says, that death and bloodshed came only after sin, he couldn't believe it. His parents were also confused and went away thinking about this for the first time. It's no wonder the young are growing up to doubt the gospel story of creation, Fall and redemption (back to a perfect world, not back to billions of years of bloodshed).

These events and many more give an absolute yes answer to the question, 'Is it worth it?' Being on the Creation Bus is a challenging and rewarding ministry.