by Mike Matthews on May 7, 2004
Share:
Email Using:
Gmail Yahoo! Outlook Other

Competing against over 350 entrants, two students at Foster Home School submitted an “electronic journal” about their imaginary journey to the comet Chiron and their search for the Oort Cloud.

Competing against over 350 entrants, Grant (grade 5) and Samantha (grade 7), students at Foster Home School in Germantown, Maryland, submitted an “electronic journal” about their imaginary journey to the comet Chiron and their search for the Oort Cloud (the alleged “nursery of comets’). They posted their humorous, imaginative journal entries and “findings” on a cool website of their own making, plomet.com. 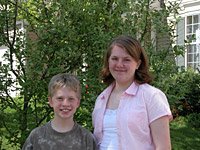 Prominent among the “daily reports” was “The Undiscovery”—the discovery that there is no Oort Cloud, as evolutionists so desperately want to believe.

The Foster children based this report largely on information they found at AiG’s website, and they unashamedly included AiG in their list of web sources, as the source of “Information on Creationist view of solar system, comets and the Oort Cloud.”

“We did research about the creationist point of view on your website.” Cathy Foster, mother and teacher of winning team, wrote to us. “From the AiG website, we learned about the Oort Cloud theory that is presented as fact in most of the books we read. But we learned on the AiG site that it might not (probably does not) exist.

“So, my children included this point of view in their project. I was concerned that the judges from the scientific community (NASA) might be put off by creationism in the project, but we won BEST OVERALL for what we did. …

“To God be the glory and many thanks for the resources you provide.”

The problem with comets is that these “dirty snowballs” should burn up within a few thousand years, but evolutionary/long-age ideas say the solar system formed billions of years ago. (See Comets—portents of doom or indicators of youth? and More Problems for the ‘Oort Comet Cloud’.)

As to why we still have comets, Samantha asks in her report, “Wouldn’t it make more sense to think that the universe is less than 10,000 years old … ?” Of course, there’s no need to conjure up an Oort Cloud if God created all heavenly bodies only 6,000 years ago!

Who’s Next? What Next? 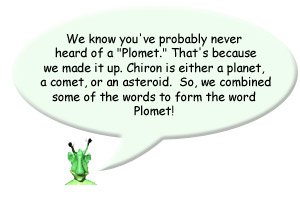 Chiron is one of those incredible mysteries in our solar system that continue to baffle evolutionists—see Kuiper Belt Objects: Solution to Short-Period Comets?. It’s one of a handful of objects between Jupiter and Neptune, called Centaurs. Originally classified as an asteroid, Chiron now appears to be icy—with a tail like a comet

Astronaut John Glenn himself,2 who co-chairs Space Day, writes that the purpose of the competition was to promote a spirit of inquiry that produces good science:

“The Design Challenges give students opportunities to use the power of inquiry so essential to good science and to find solutions for the problems of living and working in space [emphasis added].”

The winning entry of the Foster Home School is a testament to Christian students” ability to do good science. Starting with a biblical worldview is no hindrance to excellence in any field of scientific investigation (see Famous creation scientists). It’s exciting to see how Christians are creatively using science and the Bible to “pull down strongholds" against the gospel (2 Corinthians 10:3–5) by answering the scientific questions of our day.

Inspired by the Fosters, who knows what other Christian students might consider submitting a Space Day project next year, exposing another great “mystery” that defies belief in “billions of years” but makes perfect sense within the creation model. Could it be you?

An avid evolutionist blogger named Jason (at Evolutionblog.blogspot.com) had this to say in a 12 May report about the Fosters” award-winning website, confirming that even “the opposition” recognizes the remarkable work that these young people have done.

What to Make of This? When I first saw this story at the AgapePress website, I hoped it would turn out to be a huge exaggeration.

… Maybe it would turn out that while the students were, in fact, creationists, that fact played no role in their project. I mean, there just had to be more to the story, right?

Apparently not. From what I’ve been able to learn so far it appears that this story is straight up. …

Part of their entry involved writing three short stories describing the adventures of their explorers. It is the second of the three, available here, that contains the creationist content. … Anyway, the winners certainly can not be accused of concealing their sympathies.

After a fair amount of browsing on the Space Day website, I managed to find the criteria on which the stories were judged:

And therein lies the interesting part. I haven’t seen the other entries, so I don’t know what they were competing against. But considering that this story was written by a seventh grader, I must say I’m impressed. It certainly scores well in organization, plot, dialogue, and characters. Obviously I would not have chosen to cast the creationist in a favorable light, and cast the evolutionist as the humorless dogmatist, but surely that is an editorial decision.

Which brings us to the final criterion. Though I would quibble with the tone and some of the phrasing, the fact is that I can find no serious factual errors in this story. …

I think my creationism-hating credentials are pretty solid, but it looks to me like the students here did an impressive job. I congratulate them on their victory.