Not an Every-Day Occupation!

Building life-sized dinosaur models is not your typical full-time avocation!

Building life-sized dinosaur models is not your typical full-time occupation! But that did not make AiG–USA leaders wary of Buddy Davis and any possible “eccentricity” on his part when they first met him 10 years ago this weekend.

As a new ministry, AiG–USA was planning to hold a teaching conference in Mount Vernon, Ohio on the weekend of 9–10 September 1994. In the days leading up to the meeting, we received a phone call from Buddy, who lived (and continues to live) just a few miles from our conference venue in Central Ohio. He offered to bring some of his dinosaur models to add just a bit more “flavor” to this Answers in Genesis conference.

Little did we know 10 years ago how Buddy’s participation in this conference would change his life, and even the course of AiG’s future Creation Museum which was already a part of AiG’s vision when it started 10 years ago in the USA).

Today, Buddy is more than AiG’s dinosaur model builder. As an effective, dynamic speaker, he has the opportunity to conduct children’s workshops (with the help of his wife, Kay) and student rallies all over the country (and even overseas) and, as an accomplished musician, Buddy has recorded eight CDs—with a country gospel style—for AiG. Within the ministry, we affectionately call Buddy our “renaissance man” (although he’s really a “good old country boy”). 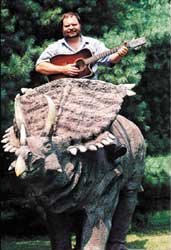 At our July “Creation College” in West Harrison, Indiana, where 580 attendees were trained to become more effective in their creation outreaches (especially as speakers), Buddy had the opportunity to share a portion of his “creation testimony.”

Today, his “missionary lizards” (about 70 of them) have already been moved into storage at AiG’s $25-million Creation Museum (under construction) and newly finished headquarters in Northern Kentucky (the staff moved in earlier this week). Buddy’s dinosaurs will eventually be on display and available for viewing by an estimated 180-million Americans (and millions of Canadians) who could drive to the museum in one day (a 650-mile radius from Northern Kentucky).

The dinosaurs will be used to show future museum visitors that the so-called “mysteries” about dinosaurs can be explained by the history recorded in the Bible, not by the evolution story. It’s all something Buddy never dreamed of ten years ago this week!