Pastor Robert Ham had his homegoing on Sunday afternoon, 9 June in Queensland, Australia. 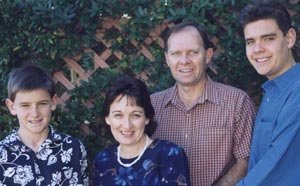 Pastor Robert Ham, younger brother of AiG-US President Ken Ham and the focus of much international prayer support since being diagnosed with a degenerative brain disease about two years ago, had his homegoing on Sunday afternoon, 9 June in Queensland, Australia. He leaves his wife Brenda, two sons, Geoffrey and Joshua, mother Norma and five siblings.

Ken Ham happened to be on a weekend speaking tour in Queensland (and had the opportunity to visit Robert Thursday the 6th and Saturday the 8th) when word got to him that his dear brother had passed. Ken was particularly close to Robert, as both have been in full-time ministry for many years and were in constant communication as they explored the Word of God together, despite the many thousands of miles that separated them. Robert was known as a fine expository preacher, whose tape message on principles from the book of Genesis on how to build a Biblical, Godly family was given away to more than 5,500 AiG-US supporters last year.*

Ken remarked: “My brother loved the Word of God, something he and I inherited from our father. It was especially poignant that Robert passed away exactly seven years after my father died, 9 June 1995.”

On 13 June, Ken Ham, AiG-US president, spoke at a memorial service in Australia for his brother Robert, a pastor who was known for his expository preaching.

In his eulogy, which included a Gospel presentation, Ken spoke of his brother’s passion for Biblical authority. He also shared why this world sees so much suffering and death. Ken’s brother David as well as Pastor Ian Wright also spoke at the service.

Also, click here to read a tribute to Robert Ham—a poem written in “Australian style”—composed by his brother Stephen.