We are happy to report that the long-awaited and much-asked-about Zoo Guide has been an AiG bestseller since its release in June. We didn’t anticipate such an overwhelming response: already over 800 copies have been sold! With its summer release, we were hopeful that parents and even homeschoolers, despite summer break, would get out there and start putting it to good use—and apparently they are. So that’s exactly what we did, too.

I decided to take my eight-year-old daughter and the book on a test drive of sorts and report back, so that we could give valuable usage tips and information to those wishing to use or purchase this book. Because I’m a staff member, my daughter and I are well-versed in the 7 C’s of history; nevertheless, I found the introduction of the book a good way to prepare for the trip—particularly important to review with your students or children if they do not have this biblical framework. 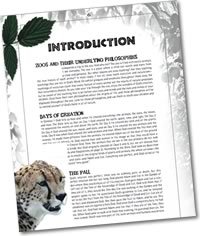 So grab some sunscreen, a water bottle and the Zoo Guide, and set off on your learning adventure. The book is designed and organized to make it easy to find animal descriptions quickly. The Table of Contents at the front gives the page numbers of the animal groupings, which are also indicated by a page tab system that you can easily see as you fan through the book. Over 100 animal listings are broken into five categories: Ungrouped mammals, Birds, Cats, Monkeys & Apes and Reptiles & Amphibians. Inside each grouping, the animal descriptions are arranged alphabetically, with one page a full-page photo, and on the facing page, a detailed description of the animal, giving details of its taxonomy, diet, habitat and God-honoring facts about its design. The Zoo Guide is also spiral bound, making it easy to show the pictures to your child or group as you read the information on the opposite page. 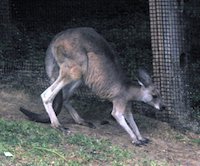 This summer, the Cincinnati Zoo is featuring “Adventure Down Under,” so it was a real treat for us to see (and hear) some unusual animals from Australia, like the kangaroo and kookaburra. One of our favorite things about the Zoo Guide was the “fun facts” on each animal listing. For instance, it lists that kangaroos will stamp their hind feet and growl like a dog when threatened. We looked this up to try to figure out what this kangaroo is doing in the photo on the right! 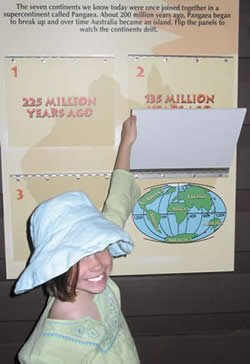 Note the millions-of-years mantra in this display about Pangaea. Another display in the manatee exhibit stated: “It may be hard to believe, but the closest living relatives to the manatees are the elephant, aardvark, and the hyrax.  Even though the manatee bears little resemblance to any of these terrestrial animals, they do share anatomical features that show that they shared a common ancestor over 50 million years ago.”

Overall, we found that the evolutionary indoctrination, at least at this particular zoo, was not as overwhelming as anticipated. While there were a few “plugs” (see the display below, from the Children’s Zoo), we found the Zoo Guide to be more of a complement to the signs found at each display rather than necessary for a refutation of evolutionary “facts”; although, depending on the exhibit or zoo, others may find a need for refutation. We enjoyed going around discussing on which day of Creation Week each animal was created, and from what “kind” they were descended. This also gave opportunity to recall the Flood and how it led to speciation and extinction (a subject mentioned on many signs throughout the zoo).

The thought processes that this book encourages open up all of nature, so apparent at the zoo in particular, to the opportunity to boast of God’s creativity and prowess even in His fallen creation, to reflect on the sobering effects of the Fall and the Flood, and to realize that the God who merely spoke these animals into existence formed us and breathed into us as special creations in His image. And He is willing to adopt us into His family because He wants a relationship with us, despite humankind’s rejection of Him in Eden. Now that’s something worth considering at the zoo—and anywhere else!

Was this article helpful? Do you have a story to share about your use of the Zoo Guide? If so, let us know!