Dr. John Whitcomb, was given a tribute Monday evening as the fiftieth anniversary of his book, The Genesis Flood, was celebrated at Faith Baptist Bible College and Seminary. 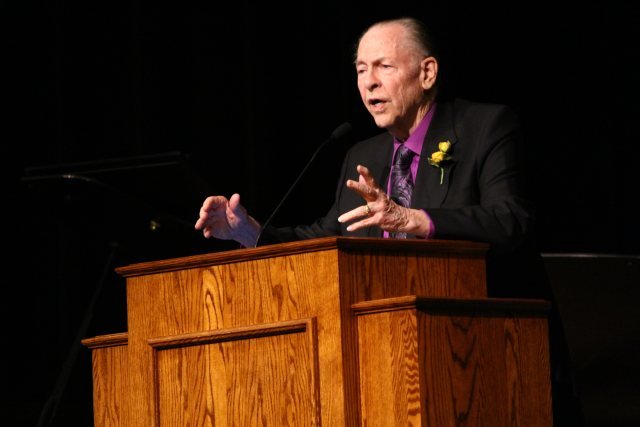 The co-author of the creationist classic The Genesis Flood, Dr. John Whitcomb, was given a tribute Monday evening as the fiftieth anniversary of his co-authored book was celebrated at Faith Baptist Bible College and Seminary near Des Moines, Iowa. Dr. Whitcomb is not one to draw attention to himself and the historical significance of his famous book, so the Bible college and Seminary decided to do it for him. What was originally planned to be a series of talks given by Dr. Whitcomb on the FBBC campus also turned out to be a tribute to this wonderful servant of God whose co-authored book (with Dr. Henry Morris) made a huge impact in showing the Bible to be authoritative. The school also announced the establishment of the John C. Whitcomb Scholarship for Excellence in Bible Exposition. 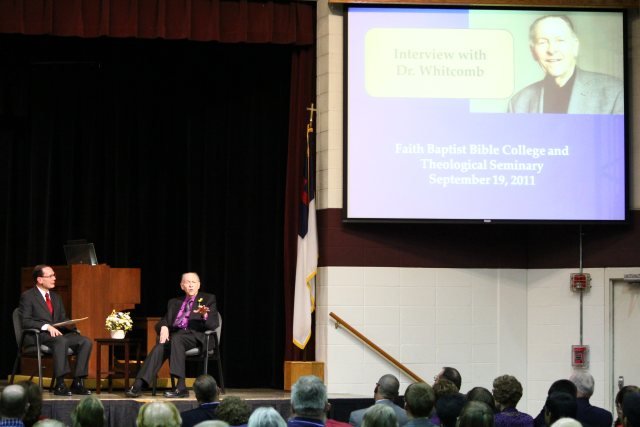 On September 19 at FBBC, a number of video tributes to Dr. Whitcomb were shown to the college audience and guests at a special evening program in honor of Dr. Whitcomb. Dr. Whitcomb also spoke Monday evening. Three video tributes were supplied by Answers in Genesis—from AiG president Ken Ham, from Dr. Andrew Snelling, who has written the update to The Genesis Flood, and from Dr. Terry Mortenson, whose video shared something about the historical importance of the book (Dr. Mortenson is a historian of the creation/evolution issue). You may watch these three clips on our Video on Demand page (they are under two minutes each). You may also watch the full video tribute at www.creationworks.net.

For its part, Answers in Genesis will continue the celebration of this year’s The Genesis Flood fiftieth anniversary by holding an all-day conference next month inside the Creation Museum’s new Legacy Hall. On Saturday, October 15, museum guests—with paid museum admission—will be treated to several talks on the importance of The Genesis Flood in the history of the modern creation movement and the overall struggle for the truth of biblical inerrancy. In addition to talks by Dr. Whitcomb, Ken Ham, Dr. Andrew Snelling, and Dr. Terry Mortenson, Answers in Genesis will be flying in Dr. John Morris, who will discuss his father’s contribution to The Genesis Flood fifty years ago. Visit our outreach site for a schedule of these faith-building talks.

On the Friday evening before this event at the museum, a special banquet will be held to commemorate the book and the long-time work of Drs. Whitcomb and Morris. For information on this special evening, which will include some tasty food and brief talks by Dr. Whitcomb, Dr. John Morris, plus Ken Ham, reserve your spot now for the $35 dinner and talks.

For the all-day Saturday conference, admission to the several hours of talks is at no extra charge for museum ticket-holders that day. 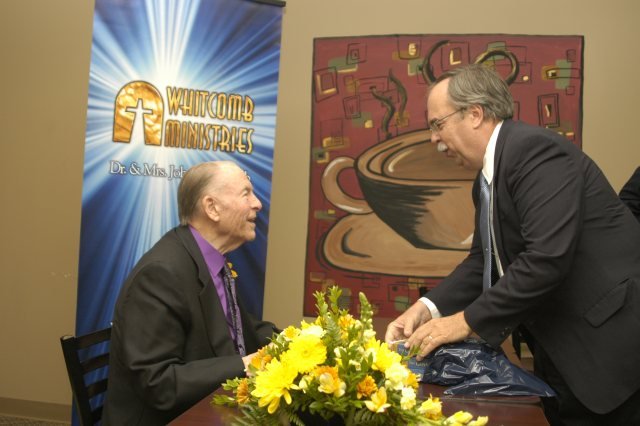 After his talk, Dr. Whitcomb signed copies of his books, including The Genesis Flood, co-authored with the late Dr. Henry Morris.