For the ninth year, God has opened up an incredible opportunity for Answers in Genesis–US to distribute resources, free of charge, at the annual National Educators Association (NEA) convention. The NEA is one of America’s most liberal lobbying groups—and not just when it comes to educational issues. It also pushes a pro-homosexual and pro-abortion agenda. This year’s conference is being held in Washington, DC from 2–4 July. 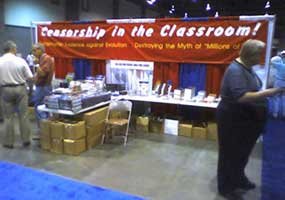 The theme for the Creation Science Educator Caucus booth is “Censorship in the Classroom.” Our goal this year is to hand out all of the 1,000 Wieland vs. Willis Genesis Debate DVDs and 1,000 Mount St. Helens: Explosive Evidence for Catastrophe DVDs, as well as hundreds of other books and witnessing booklets. The Mount St Helens DVDs were graciously donated to this NEA outreach by the Institute for Creation Research near San Diego, California.

Based on previous years” experience, we anticipate a strong reaction to our presence there. This is, after all, front-line “creation evangelism.” While we expect some teachers and administrators to appreciate our outreach, the vast majority of education professionals at the conference are either indifferent to the creation/evolution debate or actively opposed AiG’s message of the Bible’s accuracy and its authority from the very first verse. (For a review of last year’s outreach, please see ‘You Are a Threat to Education!’)

It is not, and has never been, AiG’s goal to force the teaching of creation in the public school classroom [see Creationism battle heats up again in US schools]. Real, lasting change in individuals and society will only come as God changes the hearts of people to repent from their dead works and trust in the Creator God—and the salvation that comes through His Son Jesus Christ, as the Bible teaches. But many won’t listen to such teachings because they think the Bible is untrustworthy, starting with Genesis. That’s why the materials being handed out at the NEA convention about biblical reliability are so important in knocking down a stumbling block to listening to the gospel.

In fact, this is the ultimate reason for all of AiG’s ministry—to present biblical truths from Genesis to the Gospels, especially the life-changing gospel message.

Thus, as America celebrates her “Independence Day” and political freedom over the weekend, please pray with AiG that many NEA members here in the nation’s capitol will experience the true freedom that comes through Christ (Galatians 5:1).