Ralph ‘Chip’ Vater, an AiG supporter who was always ready and generous of his time when called upon to help at AiG’s Creation Museum, died earlier this week in a horrible accident at his welding shop. 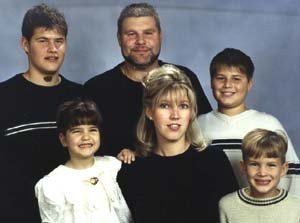 Ralph “Chip” Vater, an AiG–US supporter who was always ready and generous of his time when called upon to help at AiG’s Creation Museum, died earlier this week in a horrible accident at his welding shop near the museum site in Northern Kentucky. Chip, 38, leaves his wife Bethany, and four children: Trey, Chaz, Kyler and Kinza. Trey is a student at the school where Chip graduated and where some AiG staff also send their children—Calvary Christian School of Covington, Kentucky. His loss, therefore, doubly hits home for many AiG staff.

Chip had volunteered several hours of his construction-related talents to the museum project, including welding, the delivering of water in his water truck and other tasks, according to Skip Tilton. Skip also recalled that Chip liked to use “creation evangelism” at his workplace: “Chip would ask me to come to his welding shop and share the truths of Genesis and the gospel with his workers. One time a vendor happened to stop by while I was visiting, and so Chip made sure he got the gospel message also!”

Skip added: “I was going to visit Chip at his shop just before the accident occurred. I will certainly miss his fellowship and talents for the Lord.”

He said that Chip was very excited about AiG’s various Bible-upholding outreaches, and was a willing and eager participant in the construction of the museum. Skip noted that Chip was one of many hundreds of volunteers who have provided vital assistance in building AiG’s 95,000-square-foot center—a facility that will proclaim biblical truths from Genesis to Revelation, especially the gospel. Located two exits west of the Cincinnati Airport, the museum’s “shell” and headquarters offices are virtually complete, with much interior work having been undertaken this week (painting of ceilings, installing the security system, framing, etc.). It has been a somber week at the site, though, because museum staff had gotten to know Chip through his volunteer visits.

At times like this, Christians (and even skeptics—including those who might be reading this web article and wondering how Christians will react to such news) might wonder: why God would allow such a tragic thing to happen to one of His children and servants? Well, the Vater family (who were holding a memorial service as this article was being posted, Friday morning, 19 December) would like you to know that the Bible provides the answers, including to the age-old question: if there’s a God, why does He allow death and suffering in this world? For the full answer, see Why Does God’s Creation Include Death and Suffering?.

Please pray for the Vater family that, during this terrible loss at a season when families look forward to being together, their love for the Lord will shine among their unsaved family and friends.

That hopeful message was echoed by Chip’s pastor, Ken Read. Pastor Read told AiG that Chip helped start their church, Christ’s Community (of Cincinnati, Ohio) as a “church plant,” and where he used his skills to clean, fix and renovate an old church building. Pastor Read told us that “everyone who came to the church knew and loved Chip. I doubt that he had an enemy.”

In lieu of flowers, Pastor Read suggested that those wishing to make a memorial gift could send a check to a scholarship fund set up for Chip’s four children. Such gifts can be mailed to: The Ralph “Chip” Vater Children’s Scholarship Fund, Bank of Kentucky, 1065 Burlington Pike, Florence, KY 41042-1235. Thank you for considering this.