Thou shalt not lie

by John UpChurch on May 29, 2007
Share:
Email Using:
Gmail Yahoo! Outlook Other

Creationism is sometimes dismissed by critics with words like “creationist nonsense.” Then there are the accusations of “anti-science” and “anti-reason” that are increasingly humming through the blogosphere and trying to drown out the creationist arguments, especially with the opening of a new creationist center.

But the just-opened Creation Museum near the Cincinnati Airport is being heard above the din. Its quality is not laughed away (as even those who disagree with the message cannot deny the attention to quality and the eye for detail that is evident throughout). The Bible has come to life, and the science presented here is not easy to dismiss. While evolutionists have had quite a free reign over the past decades in monopolizing the world’s universities, journals, and science museums, Monday’s grand opening was, as Mike Zovath (VP, AiG U.S., Creation Museum) put it, “the end of the beginning.”

A group called The Campaign to Defend the Constitution (DefCon) sent a plane to circle the museum on Saturday with a banner that read, “DefCon says thou shalt not lie.” Well, we couldn’t agree more. Indeed, the goal of Answers in Genesis and its new Creation Museum is to make sure that the public knows the truth about evolution and the billions-of-years ideology. Contrary to what museum critics have said, AiG wants people to learn about evolution (and, in fact, you can find out quite a bit about the evolutionary timeline in the museum), but we also want them to see and understand the presuppositions that underlie that belief system and the differences between operational science (i.e., repeatable, observable science) and origins science (i.e., unrepeatable, unobservable science). The museum’s opening marked the “end of the beginning” of the opening of eyes of the public to the trustworthiness of God’s Word.

The Saturday before the grand opening, a ribbon-cutting ceremony was held before staff and specially invited guests (about 1,000 in all). By 11:00 a.m., the air was sweltering, and many were using Creation Museum packets to fan themselves. A few protestors had gathered outside the gates with signs and placards, and the DefCon plane sputtered above. Media vans jockeyed for position in the parking lot, and camera lenses glinted in the sun. As the event started, it was the culmination of a project two decades in the making.

We invite you to listen to the audio of last Saturday’s festivities and hear the amazing history of the vision that God gave Ken Ham, Mark Looy, and Mike Zovath so many years ago; you can also learn about the expected economic impact that the Creation Museum will have for the Cincinnati/Northern Kentucky area; and you can even watch the actual video of the ribbon cutting.

The ribbon-cutting ceremony was an amazing event that could never come across in recordings, videos, or words, however. You could feel the excitement when the crowd watched the new 30-second TV commercial for the museum, and quite a few summed it up with, “Wow.” You could hear the excitement when musician Buddy Davis sang “Dreams out of Nothing.” You could see it when several members of the AiG and museum staff were surrounded by media seeking interviews. 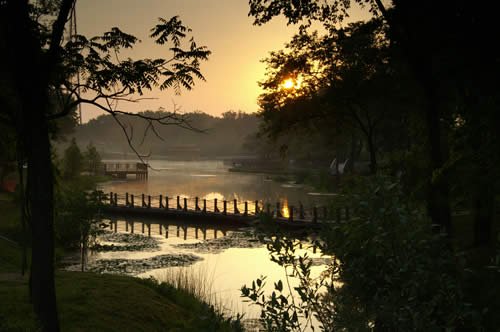 Many years ago, I first heard about creationism from the mocking pages of an anthropology book and the ridicule of an astronomy professor. I laughed, too—once. But as I was wandering through the corridors of the Creation Museum, watching the videos and reading the exhibits, I kept thinking back to the letter that Ken Ham’s mother sent AiG just before the opening festivities. Her prayer was that the museum would “stand up to the world as a beacon of God’s love, power, and grace.” And that is my prayer, too—that those who are tempted to scorn this museum will, as I did many years ago, find out that creation and science attest to the reality of what God tells us in Genesis.

The mission of the Creation Museum is not just to dazzle people with amazing exhibits, although there are many of those, or to show them how real scientific evidence supports a six-day creation, although that’s there also. The real mission of the Creation Museum is to show all who come here that they can trust what God says—not just in Genesis, but in the gospels of Matthew, Mark, Luke, and John. We may have new technology and new research, but the message—God’s good news—is always the same. And that message, ultimately, will never be lost, even among the noise of critics.