Speaking of the Creation Museum . . .

Have you taken the time to tell others about the Creation Museum, a one-of-a-kind evangelistic outreach of Answers in Genesis? 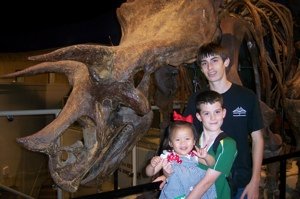 Cole (center) posing with his siblings in front of the triceratops skeleton in the Creation Museum’s Dinosaur Den.

Have you taken the time to tell others about the Creation Museum, a one-of-a-kind evangelistic outreach of Answers in Genesis? Twelve-year-old Cole loves the museum so much that he is promoting it on a whole new level: making the Creation Museum the subject of his competitive speech presentation!

Cole is a homeschooler from Monroe, Louisiana, currently in sixth grade. He is involved with the National Christian Forensics and Communication Association, which offers “a means for home schooled students to learn and exercise analytical and oratorical skills, addressing life issues from a Biblical world view in a manner that glorifies God.” Cole recently competed at his first regional speech tournament (for NCFCA Region 7, in Montgomery, Alabama).

During each competition, Cole presents his speech a series of times, each in front of a panel of judges and an audience. The speech is a great testimonial for the museum, and several judges have commented in their reviews that Cole’s speech piqued their interest to visit.

This year, Cole is competing in the NCFCA Seniors Level for the first time. In his three previous pre-qualifying tournaments in Region 7, he was a semi-finalist twice and placed eighth in finals the other time.

Both in thanks and congratulation to Cole and as motivation for the rest of us, we are reprinting Cole’s speech on the museum (with his and his parents’ permission).

Last summer, my family visited the Creation Museum in Petersburg, Kentucky, just over the state line from Cincinnati, Ohio. My family and I had an amazingly wonderful time! The museum has a fitting motto, “Prepare to Believe!” I came away from the museum knowing the answers to all of the questions I asked earlier. Not only that, but I also came away better knowing how to communicate to others why the Bible is absolute truth.

First, let me give you some general information about the Creation Museum. Designed by a former Universal Studios exhibit director, this state-of-the-art 60,000-square-foot museum brings the pages of the Bible to life. Actually, the museum is a creationist answer to popular natural history museums.

According to the museum’s president and founder Ken Ham, there are three main purposes for the museum: “First, it acts as a rallying place, calling people back to the absolute truth of the Bible. It is a place of revival, a starting point for a new reformation. Secondly, it is a witnessing tool. There will be those who sneer, but some will be challenged to think, and still others may come to believe. Finally, it is a valuable, unprecedented resource for information and education, enabling us to put into practice 1 Peter 3:15, which says in part, ‘Always be prepared to give an answer to everyone who asks you to give the reason for the hope that you have.’” (Ham, Creation Museum Brochure)

My family and I are just five of the over 600,000 people [now more than 700,000 –Ed.] who have visited the museum since it opened in May, 2007, according to a Baptist Press article. (Foust, Baptist Press) Now, let’s move on and let me tell you about the different parts of the museum.

For my second point, I will share with you today about the timeline. This historical timeline is a biblical walk through history, and is the centerpiece of the Creation Museum. It gives scientific and biblical answers for the world we live in today. This one-way, self-guided tour begins on the main floor of the building and spirals down to the lower level of the museum. Once you enter, you will see a dinosaur excavation. There are two scientists working at the excavation site. They both have the same facts, but they don’t have the same worldview to interpret those facts. One of the men has the worldview of evolution, and one has the worldview of Creation as accounted in the Bible. With a different worldview, you can get very different results.

The timeline exhibits are designed in a particular order to emphasize the Bible as the correct worldview, allowing each guest to explore the Bible and science through the 7 C’s of biblical history which are: Creation, Corruption (The Fall of Man), Catastrophe (The Flood), Confusion (The Tower of Babel), Christ, Cross, and the Consummation. One sign I saw close to the beginning of the walk-through stated, “God’s Word is the key to the past, present, and the future.”

This walk-through takes an average of two to three hours and features many of the Creation Museum’s exhibits, which include high-tech animatronics. In this timeline you can walk through the Garden of Eden where dinosaurs roam with the other animals, listen to a life-like wax sculpture of Methuselah tell his story, see a portion of the Ark to scale, and continue on through history as accounted in the Bible.

Now that I have finished telling you about the Timeline, I will take you on an imaginary tour of another interesting exhibit at the Creation Museum.

Hello, my name is Cole! I’m your tour guide today, and I’ll be taking you through the Dinosaur Den. As we walk through the entrance to the Dinosaur Den, notice the sign above you that says, “Biblical History is the key to understanding dinosaurs.” Now most of you may think, “Dinosaurs . . . in the Bible? That can’t be; they lived millions of years before man did!” If you thought that, remember that the Bible states clearly in Genesis that all land creatures and the first two humans were created on the sixth day of Creation!

As we finish walking up the steps, you will see to your right a life-size model of a stegosaurus. All the models you are seeing today were built by Mr. Buddy Davis, a talented sculptor and musician who travels on speaking tours with Mr. Ken Ham, the museum’s president.

As we walk a little further, on your left, you will see a life-size model of a T. rex. Look how tall it is! Maybe only the tallest of you could touch its chin! And look at those vicious teeth. Do think those teeth are only for tearing meat? Well, consider this: before the Fall of Man, there was no death. So before Adam and Eve sinned, the dinosaurs most probably ate vegetation. I bet this big fella could have stripped a fruit tree bare of its fruits and leaves in two minutes flat!

Now, look around you. You will see many other types of dinosaurs including a velociraptor, an allosauras, and a dilophosaur. Also notice the pterodactyl hanging from the ceiling. You may ask, “What about all these other little dinosaurs?” The reason there are so many little dinosaurs is because the average size of a dinosaur was between the size of a chicken and a large sheep or bison!

What did you say? You want to know why that one over there is only a skeleton? Well, follow me, and let’s take a closer look. This is a triceratops skeleton; it’s not made from actual bones. However, it is made from molds taken from actually excavated fossils. Wanna stop here and have your picture made with the triceratops skeleton? It’s one of the favorite picture-taking spots in the museum.

This concludes our tour of the Dinosaur Den. Remember that biblical History is the key to understanding dinosaurs! Well, now that I’ve given you some general information and told you about the timeline and the Dinosaur Den, there’s still one more thing about the Creation Museum I have left to describe.

The museum’s five theater presentations are my favorite parts of the museum. These five theaters are scattered throughout the building, and are situated beside the other exhibits with which they are closely related.

For instance, the “Six Day Theater” and the “Last Adam Theater” are part of the Walk-though Timeline of History. The “Dragon Legends Theater” is right beside the Dinosaur Den, and helps tell about references to dinosaurs in the Bible, and how some ancient legends about dragons may have actually been stories about surviving dinosaurs.

The next theater I will tell you about is entitled “Men in White,” a take-off of the title of the movie Men in Black. This special effects presentation answered the question, “What is the purpose of life?” I felt like I was a part of the crucifixion earthquake when my seat began to rumble. I also felt like I was part of the Flood when the seat in front of me sprayed water in my face.

However, I saved the best for last! In the museum they also have a planetarium that has an awesome show. Each seat is a rocket launching pad in the Stargazers Planetarium. This 22-minute presentation is simply amazing! It takes you on an imaginary spaceflight, beginning at earth, traveling to a far corner of the universe, then back again to earth. I was overwhelmed by the great distances described in this presentation. You will hear scientific and biblical evidence disputing the theory of evolution. For example, blue super-giant stars would already have burned out if the universe were billions of years old. All through this presentation, God is referred to as the creator and architect of the universe.

In conclusion, I believe that I have accomplished my goal of informing you about the Creation Museum. Today, we have learned some general information about the museum, talked about the timeline of history, gone on a tour of the Dinosaur Den, and heard about the museum’s five theater presentations. If you still want to know more, you can visit the website at www.creationmuseum.org, where I got additional facts besides what I learned on my trip. You’ll find that there is also a petting zoo, botanical gardens, lecture series, seasonal exhibits, and other interesting things there. I hope that after hearing my informative speech today, you will be inspired to go and visit the Creation Museum in Petersburg, Kentucky. You may be a strong believer wanting to know how to defend your faith, or you might consider yourself a truth-seeker, just wanting proof that the Bible is true. Then again you may be skeptical about the museum. I still invite you to visit the Creation Museum. Your life may change forever. Prepare to believe!