AiG’s Creation Museum-which will present a “walk through history” of the world from Genesis 1 to the present-is now in the design phase, with project engineers and architects working on the layout of the museum and the grounds. This is ongoing despite a frivolous lawsuit that has been filed to stop the rezoning of the 47 acres of property for the 95,000-square-foot facility, which will also serve as AiG’s new headquarters.

AiG staff have been meeting with engineers to set project deadlines and discuss design features. “Because the museum project will be built as donations come in, it’s not possible to give a specific timeline for its completion,” declared Ken Ham. “It will take many months of planning and securing the necessary building permits, but my hope is that God will lead His people to support the museum. Perhaps by the fall of 2001, this facility will be open to the public.”

AiG is confident that the lawsuit filed by a small (but vocal) group of opponents in June to have the courts stop the museum will not delay land preparation and construction. Attorneys for AiG are calling for depositions to be conducted immediately, and have filed a counter-claim, asking that the Circuit Court dismiss the lawsuit.

The Fiscal Court (i.e., county commissioners) of Boone County voted 3-1 in May to approve AiG’s rezoning application on this property west of the Cincinnati airport in Boone County, Kentucky. A lawsuit was filed by a family residing near the site and by a couple who live more than two miles away. The latter couple, who have expressed concerns about traffic (although they don’t live near the property), sewage, etc., resorted to spreading false rumors (i.e., that AiG is a “cult"). These rumors continue even though they are aware that dozens of Bible-believing churches in the region have signed petitions or resolutions in support of AiG. Also, 3,000 area residents have signed petitions or written letters in support of the museum. 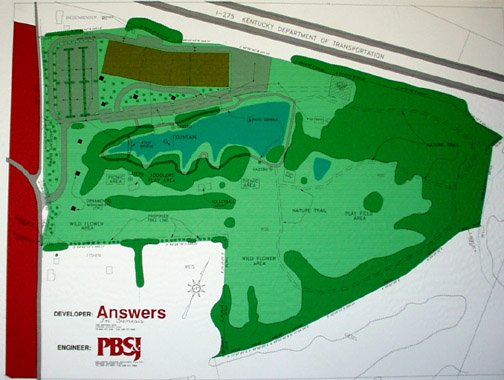