Behind the Scenes: A Closer Look at the Creation Museum

What happened to our culture when God and His Word were systematically removed and outlawed from the public forum? What happened when the God of the Bible was replaced with the god of humanism and the religion of science? In America and other Western nations, one result is obvious: families are in trouble.

Two exhibits at the Creation Museum, Graffiti Alley and Culture in Crisis, explain the relationship between belief in evolutionary ideas and the decline of the family. Graffiti Alley reminds guests that the modern world has progressively abandoned the Bible over the past century. When Christians began reinterpreting the Bible based on geologists’ claims that rock layers are millions of years old, they opened the door to skepticism of the Bible’s authority. Now the Bible has lost its place of authority in the hearts and minds of people.

Culture in Crisis shows museum visitors the sad result when the church compromised on the Bible’s history. Visitors will see a broken church in which a pastor is droning on about the way the Bible fits with modern evolution, while in the pews the parents are listening but the kids are goofing off. A wrecking ball labeled “Millions of Years” has smashed the church’s foundation, scattering bricks around it. The bricks are labeled with doctrines from Genesis, such as “Made in the Image of God.” Cracks from the destruction of the church’s foundation spread across the street to a modern home. Guests will be able to peek into the home and realize why young people no longer seem to care about the Christian values of their parents, as they grow callous to violent media, pornography, and abortion.

Hope is not lost, however; a Bible-believing paleontologist is busy repairing the foundation of the church. He represents the key to restoring the culture—Christians need to proclaim the authority of God’s Word from the very first verse! 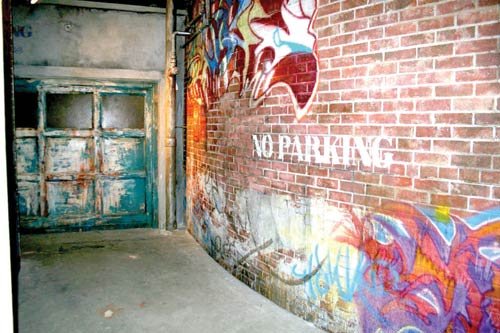 Visit a modern American street in Graffiti Alley where scenes of disrespect for personal property are interspersed with headlines from current news. Overhead audio plays common sayings such as, “It’s my life, I can do what I want with it.” 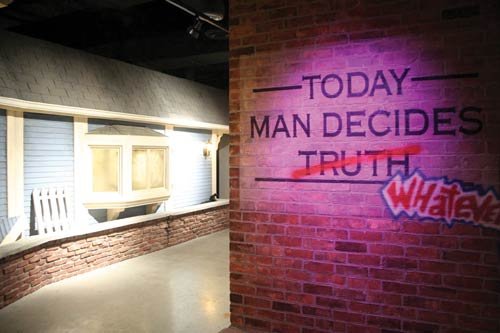 The final word in Graffiti Alley is “Today Man Decides . . . Whatever.” Around the corner is the modern American home where visitors can look into the windows and view scenes of family dysfunction so common in many homes today. As with the church, the parents are largely unaware of what is happening in their home. 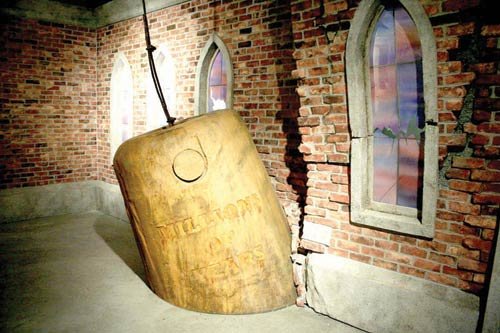 At Culture in Crisis, the “millions of years” wrecking ball smashes into the church’s foundation, representing how a false view of earth history attacks Christianity’s foundational doctrines. Visitors will peek into the church windows and see the pastor undermine the Bible by teaching that God’s Word only deals with moral standards and not science (thereby weakening the authority of the Genesis account of origins). Meanwhile, the congregation is oblivious to what is happening.

The Creation Museum and AiG headquarters are located on I-275 only 2 exits from the Cincinnati International Airport. Open 2007!

Previous Article The Origin of Oil