Joe Taylor is the owner and curator of the Mt Blanco Fossil Museum and is known as one of the foremost fossil restorationists. Yet, Joe Taylor is also a creationist!

Several years ago, a golf course owner in Newark, Ohio (USA) decided to expand a lake on his course. In the process of enlarging the lake, a backhoe got caught on some bones. After the bones were excavated, a fossil expert from Crosbyton, Texas was called in to restore, mold, and cast the bones of what turned out to be a 11-foot tall mastodon. It was the most complete mastodon skeleton found to date, with 95 percent of the bones recovered. Five casts were made, and Answers in Genesis is privileged to own one of those castings, which will be featured in the lobby of the Creation Museum.

Joe Taylor was the man behind the casting, and is the owner and curator of the Mt Blanco Fossil Museum. Joe is known around the world as one of the foremost fossil restorationists … and Joe is a creationist! 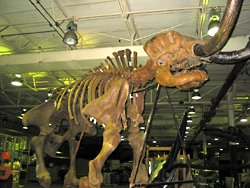 One of the five casts made by Joe Taylor, a fossil expert, of the mastodon bones found in Newark, Ohio. The mastodon will be featured at the Creation Museum.

The son of a minister, Joe has “always been interested in the biblical account of creation,” but it was watching Duane Gish “completely overwhelm an evolutionary professor” at UCLA1 in 1972 that really inspired him (a visit by ICR scientists earlier had confirmed what he believed “about the truth of the Bible, that the earth was not millions of years old and there was nothing to evolution’). Through this experience he became aware of the burgeoning creation movement, and when he found his first buffalo bones on a ranch his brother managed in 1980, he had “the impetus to start studying fossils to help the creation movement.” He realized that “creationists needed bones, and that if I dug them up myself and worked with them, I would know what the answers to evolution were.” So he set out to do just that.

He began by volunteering at the La Brea Tar Pits in CA, learning from expert paleontologists and reading everything he could get his hands on concerning the topic of paleontology. His background in art helped him learn how to make molds, castings, and restore the bones he found. In fact, his restoration of a bison vertebra was so well done that it fooled “all of these real paleo guys. One said that he had handled lots of real bones, but he couldn’t tell the difference. ‘You’re dangerous,’ he smiled.”

He displays many of his findings in his museum in Crosbyton, TX, where he shows that fossils do not support evolutionary ideas or “give any evidence of being millions of years old. What visitors will see is quite the contrary. They will also see that there are creationists who do more than just read and lecture. There are real bones everywhere. They can see that there are creationists who are just as involved as anyone in the secular world in field and lab paleontology. They will see for themselves the facts about fossils.” Tours through the museum also allow people to see the “messy casting rooms and fossils in all states of preparation.”

The museum’s gift shop is stocked with creationist books on fossils, and has “real fossils being stored there for people to see. There are real fossils to buy as well as inexpensive casts and neat plastic boxes that we make of fragments of fossils left over from digs or surface finds.”

Joe also leads fossil digs for the public. In fact, he’s headed to Montana this August to excavate tyrannosaurs and triceratops. To find out more about these digs, or to plan a visit to his museum, contact him at: