Who Are the Real “Aliens”?

You don’t have to spend hundreds of millions of dollars, as NASA and others are doing, to try to meet a (non-existent) alien. You can meet one at the Creation Museum!

Yes, the alien at the Creation Museum is a fictional one—and we make that very clear—yet we use this made-up alien to explain the gospel to the real “aliens”! Let me explain.

Answers in Genesis’ talented animators and other staff, especially AiG astronomer Dr. Danny R. Faulkner, have produced a new planetarium program for our museum called Aliens: Fact or Fiction? As museum guests sit in our state-of-the art planetarium, they will travel the universe and discover scientific and biblical answers to questions about the possibility of extraterrestrial intelligent life. They’ll meet some new friends (including our friendly fictional alien) who have lots of questions, such as:

Visitors to the Creation Museum will learn why there may be water on other planets, but there can’t be intelligent beings because of the meaning of the gospel. You see, the Bible makes it clear that Adam’s sin affected the whole universe. This means that any supposed aliens would also be affected by Adam’s sin. But because the supposed beings are not Adam’s descendants, they can’t have salvation.

One day, the whole universe will be judged by fire, and there will be a new heavens and a new earth. But God’s Son, Jesus Christ, has stepped into history as the God-man, to be our relative, and to be the perfect sacrifice for sin—as the Savior of mankind.

Jesus did not become the “God-Klingon” or the “God-Martian,” as only descendants of Adam can be saved. God’s Son remains the God-man as our Savior. In fact, the Bible makes it clear that we see the Father through the Son (and we see the Son through His Word, the Bible). To suggest that aliens could respond to the gospel is wrong.

The gospel makes it clear that salvation through Christ is only for the Adamic race—human beings who are all descendants of Adam.

Now, I’m not contradicting myself when I write the following, but I actually do believe in aliens! In fact, Christians were once “aliens.” God’s Word states,

So then you are no longer strangers and aliens, but you are fellow citizens with the saints and members of the household of God. (Ephesians 2:19)

Once people become Christians, they are no longer “aliens” or foreigners in this world—they are citizens of heaven!

The whole purpose of the Creation Museum is to present the truth of God’s Word—and the gospel most of all—so that people will receive Jesus as their Savior and no longer be “aliens” but become a part of the family of God. 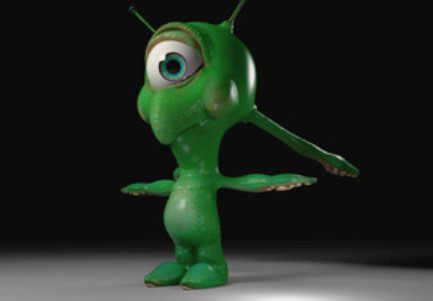 So this year, bring as many “aliens” as you can to the Creation Museum—where they will meet a special “alien” (see image at right) and learn how to stop being “aliens” themselves!

In 2014, when I wrote an article explaining why I didn’t believe in extraterrestrial aliens (using the message of the gospel as I did above), secularists wrote many articles mocking me. They included bizarre headlines like, “Creationist Ken Ham Says Aliens Will Go to Hell, So Let’s Stop Looking for Them.”

In fact, “aliens,” those people who are not of the family of God, will go to hell if they don’t repent of their sin and receive the free gift of salvation. That’s why we at Answers in Genesis seek out as many “aliens” as we can so we can present them with God’s Word and the gospel. There are billions of “aliens” on planet Earth who need to hear the message of the gospel and be saved from hell.

Yes, we will be showing museum visitors that even non-existent aliens can be used to bring the truth of salvation to real “aliens!”

Previous Article We’re Getting a Taste of Noah’s Day Next Article Surprised, Shocked, and Saddened over Statistics on Twenty-Somethings