Last month AiG-USA began a special new initiative to reach students in public schools across America. We will be equipping hundreds of thousands of young people with up-to-date evidence and arguments against the evolutionary/millions-of-years ideas that permeate millions of textbooks.

Now, we want you to become actively involved! This project is designed to help overcome the intimidation and censorship that won't allow students to even hear the problems with evolutionary beliefs.

Through this new AiG outreach, students nationwide will learn how observational science contradicts molecules-to-man evolutionary interpretations of the evidence (such as fossils, DNA, genetics, etc.).

We'll show that observational science actually confirms the biblical interpretation of the biological history of the universe, which supports the teaching of the Bible's very first book.

But … given that AiG is not a political organization or a lobbying group (we've always stated that we are not trying to force the teaching of creation in public schools) how can this be done? 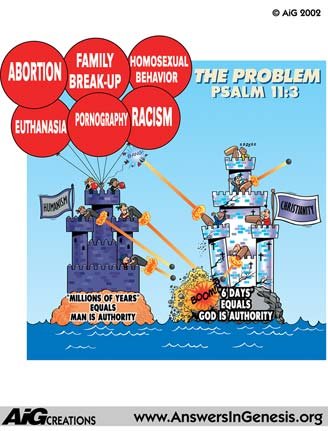 Our thrust has always been to deal with the problems in the culture foundationally.

Many of you are familiar with AiG's classic castle illustration (left). We have always taught that social ills like abortion, “gay” marriage, racism, etc., are not the root problems in the culture. They are symptoms.

Yet, as students are increasingly taught that evolution is a fact, and that the Bible's history in Genesis is just a well-intentioned myth, the more they will realize that if the basis of morality (the Bible) cannot be trusted, then there are no absolutes.

The crisis of morality in today's public school classrooms needs to be dealt with foundationally. It needs to be accomplished by reaching students, parents, and teachers with information that will positively affect the entire culture, including our young people in schools.

In Hosea 4:6 we read, “My people are destroyed for lack of knowledge.”

Certainly, public school students, parents, and teachers today suffer from a lack of knowledge. Molecules-to-man evolution is presented as fact, and information against that belief is censored.

Also, keep in mind that the majority of students from church homes (80-90% of them) attend public schools. And pollster George Barna has conducted research that indicates that 70% or more of such students will one day walk away from the church.

In October, AiG released Evolution Exposed. Roger Patterson, a former public school educator now on staff at AiG, has identified all the teaching about millions of years / evolution in the three main biology textbooks used in public schools across America.

Roger compiled the best arguments against what the textbooks teach concerning biological evolution. His impressive work exposes the frauds and reveals that the evidence is best interpreted based on the origins account in Genesis.

AiG is offering Evolution Exposed in “case lots” at a greatly subsidized price. We are challenging you, and supportive churches across the nation, to purchase multiple cases of these books and begin getting them into the hands of high school (and college) students in your area. If this were done nationwide, imagine the impact it could have!

By the way, we already notice many more complaints coming from secular educators regarding the increase in the number of students who are asking probing questions about evolution / millions of years in their classes.

Also, a Washington D.C. monthly magazine recently had an article bemoaning the fact that more and more people are challenging museum staff (e.g., at the Smithsonian) concerning why they only teach evolution in their exhibits.

I've often said that AiG is like a big reservoir: full of information. Like pipes coming from this reservoir, we are using more and more channels to get this vital information pumped into the culture. In fact, that is the way to change the culture: by doing it foundationally, as God blesses. We already see the positive effects of many years of distributing books and other resources by the modern biblical creation movement.

In the long run, this new book outreach to students in public schools can be so much more powerful than legislation or litigation. Legislation changes laws; the knowledge gained through this book changes lives. Get your church body and friends to be involved-and make a difference in your school district and community-to influence America's future leaders.

Previous Article Dawkins vs. GOD! Next Article It’s All in a Name