Deliver Us from the Evil One

The youth in our churches have not been taught general Bible apologetics, much less creation apologetics.

My heart became burdened when so many young people came up to talk to me after I spoke to their group in California a few weeks ago. They said positive things about the talks, but some teens also stated:

I grew up in the church and thought we had to believe in evolution. You rocked my world.

‘I’ve grown up in church, but never heard this information before. Thank you, thank you.

I was taught Bible ‘stories’ for years in church. I’ve never heard answers like this. You’ve changed my life—thank you, thank you.

These young people seemed to be dedicated Christians who loved the Lord. At the same time, they had a shallow understanding of Christianity. They had no idea how to answer the skeptical questions of this age—questions that are intended to create doubt in people’s minds about the Christian faith. For children and teens in our churches, lacking answers can put them on a slippery slide of unbelief. 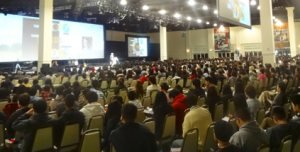 Just after Christmas, Ken Ham spoke to an enthusiastic but questioning group of teens at a conference in Southern California.

During the question time, these teens asked about the usual topics, like carbon dating, Cain’s wife, dinosaurs, etc. But there were also lots of questions like, “Why doesn’t God show Himself to us?”; “What about all the other books that aren’t in the Bible (like the Apocrypha)?”; “How can we know God exists?,” etc.

This Q&A session confirmed what I’ve seen time and time again throughout America: the youth in our churches have not been taught general Bible apologetics, much less creation apologetics (which are core in truly believing and defending the gospel). While most of these teens at the California conference seemed to be blessed by the “praise and worship” time, it struck me, based also on what I heard from their leaders, that these teens just didn’t have an in-depth understanding of the Christian faith.

After I spoke, and much to the surprise of the conference organizers, several hundred young people purchased thousands of our books, including those in the New Answers Book series.

Yes, I was overwhelmed at the positive response, but also burdened. I was reminded of how important AiG’s ministry theme is for this year:

“Standing Our Ground, Rescuing Our Kids.” It’s based on Galatians 1:4 and that passage’s reference to rescuing people from this “present evil age.”

As I pondered our new theme as well as the young people I spoke to in California, I thought of four categories of “people rescue” that AiG is involved in:

The ministry of AiG, with all its various outreaches (including the phenomenal Creation Museum and the coming Ark Encounter) are set up to “rescue” as many people as we can from this present evil age.

I can’t wait for the full-size Ark to be built and then to see millions of people visit. They’ll be exposed to the message of the One who came to be our Ark of salvation, Jesus Christ, and to be rescued for eternity.

Let’s all remember to pray, as Jesus taught us in Luke 11:4 (the Lord’s Prayer), to “deliver us from the evil one.”

Previous Article Atheists Aren’t the Only Problem! Next Article Stepping Out in Faith from AiG to the Ark Encounter