A Flood of Memories

Today is a special date in the history of the biblical creation movement. It was fifty years ago on February 20, 1961, that the first copies of the now-classic book The Genesis Flood were shipped by the publisher and received by co-author Dr. John Whitcomb. As such, February 20 has become something of an unofficial birthdate for this monumental work by Dr. Whitcomb and his colleague Dr. Henry Morris, who would later found the Institute for Creation Research. 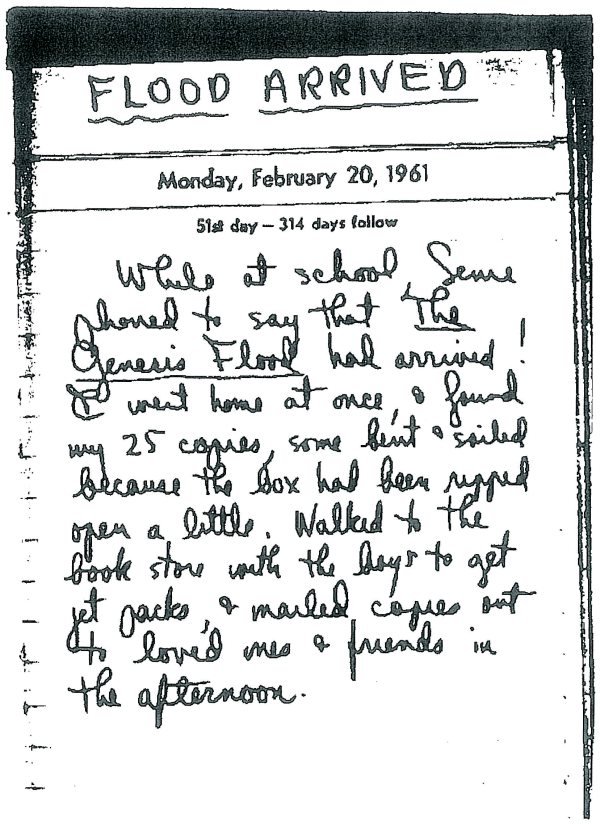 Dr. Whitcomb’s hand-written journal for February 20, 1961, featured a bold, underlined heading at the top with the words “FLOOD ARRIVED.” Underneath, Dr. Whitcomb’s entry reads: “While at school, Senie phoned to say that The Genesis Flood had arrived! I went home at once and found my 25 copies . . .”

Recently, I was asked to write an endorsement for the fiftieth anniversary edition of The Genesis Flood that is being printed by P&R Publishers. Dr. Whitcomb is sending material for the new introductory matter (the preface and history of the book), and Dr. Morris’s two sons (who work today at the organization he founded, ICR), are composing a memorial foreword to honor their father. Here is what I submitted for possible use by the publisher (recognizing that an editor might shorten it).

I have been privileged to have witnessed the rising biblical creation movement for the past 40 years and have seen it be mightily used by God to blossom into a major international force. The movement has not only shaken the evolutionary/millions-of-years establishment, but more importantly has equipped the church to share our Christian faith with renewed boldness. The publishing of The Genesis Flood 50 years ago is the recognized birthdate of a movement blessed by God, and this classic work is also now recognized as a monumental milestone in the fight against compromise in the church and for biblical inerrancy in general during our skeptical modern era.

Finding a copy of The Genesis Flood in an Australian bookstore and devouring its contents was a key event that led me to join the modern biblical creation movement in the 1970s. Drs. Whitcomb and Morris became real “heroes of the faith” for me. I saw them as giants in Christian apologetics.

—Ken Ham, president, Answers in Genesis and the Creation Museum

I shared the above bookstore experience in a web article I wrote a few years as I composed a tribute to Dr. Henry Morris after attending his funeral in San Diego. It showed how that book changed my life. 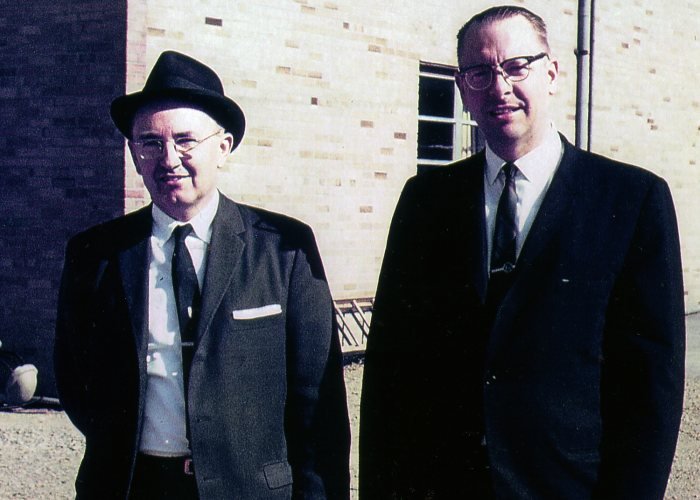 Drs. Morris and Whitcomb before the 1961 publication of The Genesis Flood.

Because The Genesis Flood has needed updating, Dr. Andrew Snelling took on the task of writing the update/sequel to this masterpiece. Entitled Earth’s Catastrophic Past (two volumes), Dr. Snelling wrote it as a project for ICR with the blessing of Drs. Morris and Whitcomb. Dr. Snelling finished the books as he joined AiG’s ministry. In this massive two-volume set (which I urge every serious creationist to add to their library), Dr. Snelling offers the latest in geological evidence that supports the accuracy of the Bible’s account of the Flood—and also its Creation account. With a PhD in geology, Dr. Snelling looks at evolutionist interpretations of the geologic record, and in his volumes he exposes their poor assumptions and conclusions. Then in a positive way, he builds a biblical geologic model for earth history, demonstrating—as did The Genesis Flood—that the book of Genesis and its history are true.

By the way, AiG will be doing some special things this year related to The Genesis Flood anniversary. I don’t want to reveal too much right now and ruin some surprises, so check back to this website often throughout the year.