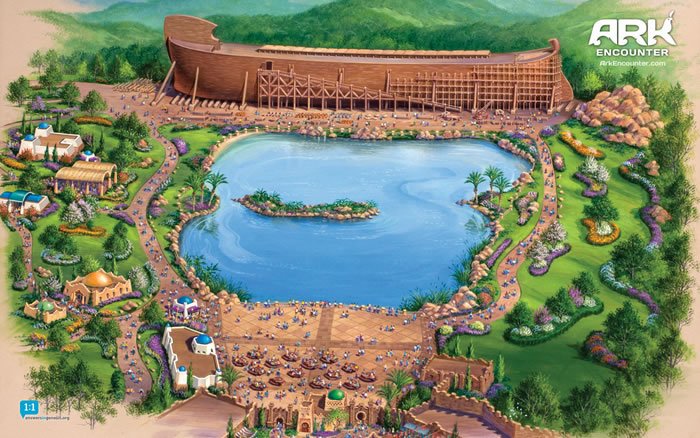 Frankfort, Ky. (Dec. 1, 2010)—Kentucky Governor Steve Beshear today joined the Ark Encounter LLC to announce the planned construction of a full-scale Noah’s Ark tourist attraction in northern Kentucky. Partnering with the Ark Encounter is Answers in Genesis, which is most widely known for its high-tech and popular Creation Museum in Petersburg, Kentucky.

“We are excited to join with the Ark Encounter group as it seeks to provide this unique, family friendly tourist attraction to the Commonwealth,” said Gov. Beshear. “Bringing new jobs to Kentucky is my top priority, and with the estimated 900 jobs this project will create, I am happy about the economic impact this project will have on the Northern Kentucky region.”

The Ark Encounter is scheduled to open in spring 2014 in northern Kentucky. Multiple sites are being considered, although property in Grant County off I-75 is at the top of the list. A feasibility study conducted by the renowned America’s Research Group has indicated that the Ark Encounter may attract 1.6 million visitors in the first year and is expected to employ up to 900 full- and part-time staff.

The for-profit Ark Encounter project will be privately funded at an estimated cost of $150 million. The final site selection for the Ark Encounter is subject to the ability to acquire all of the land needed for the project, and the approval of certain state and local incentives and other assistance for the project.

“We are very pleased to be a part of this new project,” said Ken Ham, president and founder of AiG and the Creation Museum. “AiG has been blessed to see the Creation Museum host over one million guests in three years. Based on our experience and success operating the large, state-of-the-art Creation Museum, our board believes the time is right to partner with the Ark Encounter in building a full-scale Noah's Ark. We hope that this fun and educational complex called the Ark Encounter will become another popular tourist destination for the state.”

In addition to the full-size Ark, the complex will include a walled city much like those found in ancient times, live animal shows, a children’s interactive play area, a replica of the Tower of Babel with exhibits, a 500-seat 5-D special effects theater, an aviary, and a first-century Middle Eastern village.

To showcase the “green” construction methods and materials that will be used, the complex will also include a Special Events Area for large gatherings, highlighting some of the Leader in Energy and Environmental Design (LEED) building techniques used to construct the Ark Encounter.

One of the factors in getting the Ark Encounter to launch the Ark project at this time was a November 2009 CBS News survey, which revealed that the remains of Noah’s Ark would be the greatest archaeological discovery of our day. CBS News stated: “CBS’ 60 Minutes news program, in conjunction with Vanity Fair magazine, recently conducted a web survey asking which archaeological discovery people would most want to see made next. The response: Noah’s Ark (43 percent); Atlantis (18 percent); Amelia Earhart’s plane (16 percent); Nixon’s lost tapes (13 percent); and Cleopatra’s barge (5 percent).”

The report continued: “Noah’s Ark continues to capture the imagination of the general public, and this interest spans all social, religious and economic segments. The Ark and the flood is one of the few historical events which are well known in the worldwide global circle.”

Following the release of the article, the Ark Encounter group became even more convinced about the viability of the project. It will be assembling virtually the same team that designed and built the Creation Museum. This same talented staff will design a full-scale Noah’s Ark.

For information on the Ark Encounter, see ArkEncounter.com.

*Slightly adapted for the web.