An Unprecedented Media Blitz for the Ark—Starts New Year’s Eve on Fox!

At Answers in Genesis, we have a decade-long history of utilizing mass media in a high-profile way, both Christian and secular outlets, to promote the various initiatives of the ministry. On November 12th we announced from the Ark Encounter construction site that the opening date of Noah’s Ark in Northern Kentucky would be July 7, 2016. We believe the life-size, Ark-themed attraction will be one of the greatest Christian outreaches of our day. This undertaking is every bit as professional as the popular large attractions in California like Universal Studios or in Florida like Disneyworld, but with an unashamedly Christian message. As such, AiG believes it’s vital that we do our best to use media to convince people across America and around the world to come to this unique attraction in Williamstown, Kentucky.

In the spirit of leveraging every available means by which to effectively communicate the Ark’s opening date and providing families the ability to plan their trips this summer to the Ark Encounter, tonight, New Year’s Eve, AiG is launching a highly visible national branding and awareness campaign on the Fox News Channel and its coverage of New Year’s Eve and the ball drop at Times Square in New York City. In fact, the Ark Encounter will be the exclusive national sponsor of the Fox News coverage from 11 p.m. (ET) to 12:30 a.m. (ET). We expect ratings to be especially high as presidential candidate Donald Trump is expected to make an appearance on the show.

During this Fox News sponsorship time, a 30-second TV commercial for the Ark Encounter will be shown (six times). And we believe this is first for a Christian, Bible-proclaiming ministry. AiG has worked with our outside marketing agents, Joseph David Advertising, to produce a commercial that will not only be shown on the Fox News Channel, but during many other TV programs. This 30-second, powerful commercial has a cinematic feel—something you would expect to see in a Hollywood movie trailer for a blockbuster movie. We will make this 30-second commercial available to watch at ArkEncounter.com and through all the social media of Answers in Genesis after midnight Thursday night, right when 2016 begins!

In addition, AiG will also launch a massive outdoor digital display in Times Square promoting the opening of the Ark Encounter. It will be prominently located at 46th Street and Broadway. 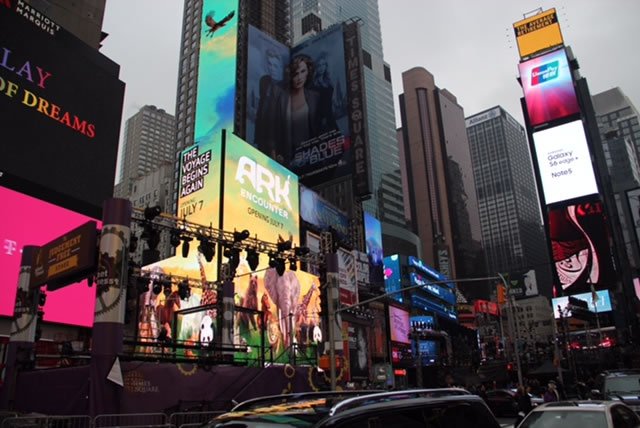 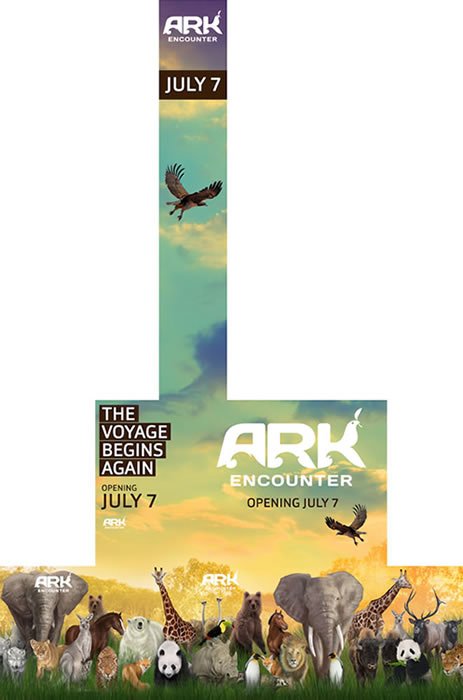 This high-powered media kickoff for the Ark is just the start of an unprecedented nationwide media effort for a Christian ministry. Over the next six months, the Ark Encounter will be promoted within the following media:

This large media campaign will generate hundreds of millions of what are called “high-quality impressions,” driving audiences to the Ark Encounter website, where they can buy advance tickets starting January 19. A high-profile nationwide promotion of the Ark Encounter is highly recommended to us by renowned researcher Britt Beemer of America’s Research Group, who predicted as many as two million visitors in the first year coming to the Ark if the national awareness is high enough. Our responsibility is to do the very best we can to reach into both the secular and Christian worlds to persuade as many people as possible to bring family and friends to this world-class architectural and engineering wonder.

By the way, some visitors who have seen the massive Ark (the largest timber frame structure in the world) under construction have declared that they believe it could be classed as “one of the new wonders of the modern world.” But it’s not just the spectacular massive ship itself that will amaze people—people will also be astounded by the scores of unique world-class exhibits inside the Ark. 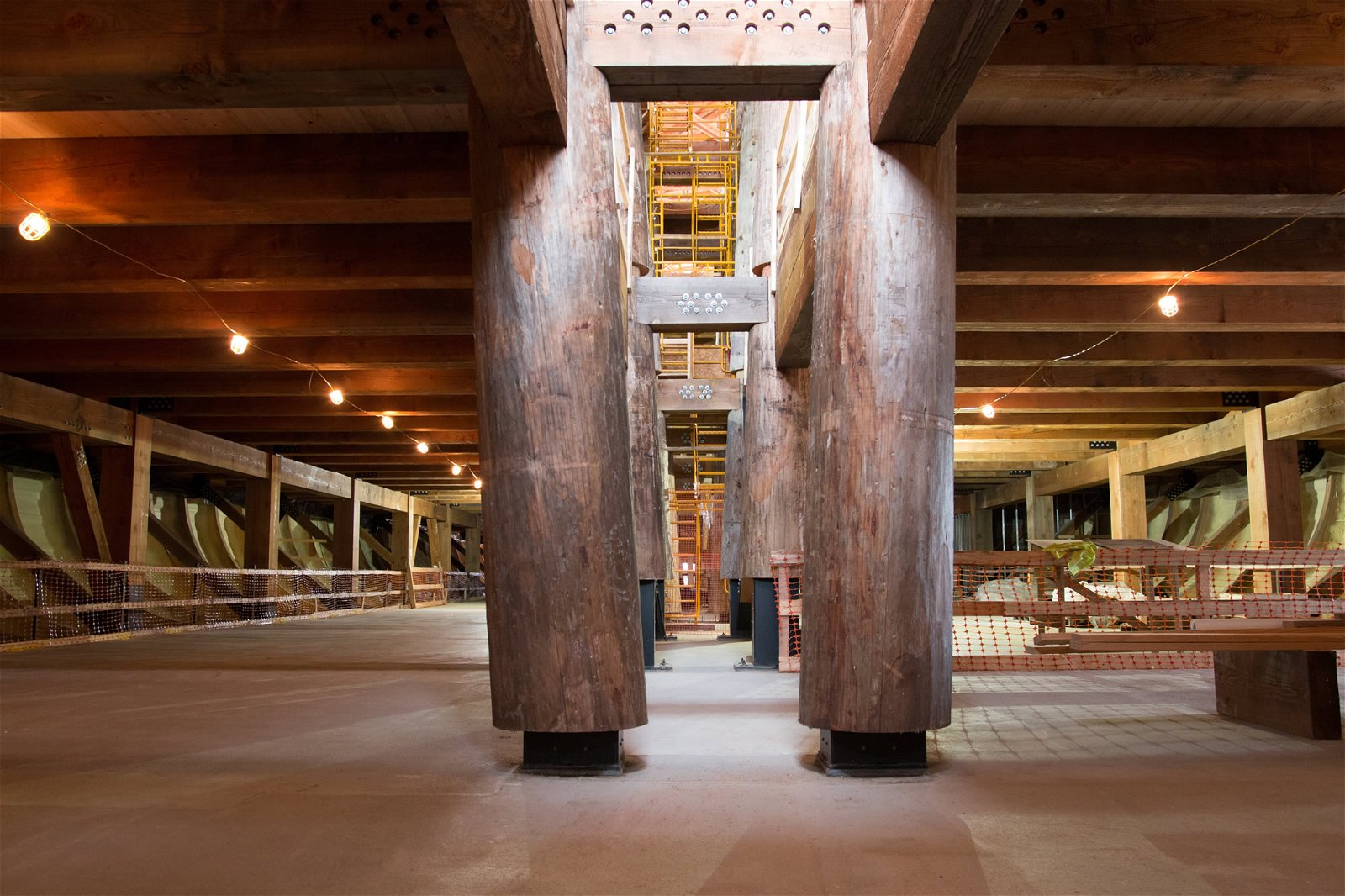 This intricate and sophisticated “media buy” to market this attraction integrates the Ark Encounter brand in compelling ways. For example:

Christian and non-Christian alike will find the Ark Encounter a startling, entertaining, and teaching attraction like no other.

No Christian ministry that we know of has ever initiated this kind of wide media effort, which is typically reserved for major national consumer brands, and we thank God for it. And this coverage is just for the Ark’s pre-opening marketing. Once the Ark is open, we have another massive media plan that is designed to blanket the United States (and also reach the world). In a way, we could say we are going to the “highways and byways” to bring people to the Ark and have an encounter with God’s Word and the gospel. This media initiative is designed to attract families from all across the country (and around the world) who desire a family-friendly, safe, and fun destination, one that has been described as a world wonder! Yes, we are unashamedly Christian, but the messages through the exhibits will be very tastefully done. Christian and non-Christian alike will find the Ark Encounter a startling, entertaining, and teaching attraction like no other.

We do give all glory and honor to our Creator God, who we believe with all our hearts has orchestrated it all for such a time as this, to remind the world of the truth of God’s Word and the saving gospel.

For if you remain completely silent at this time, relief and deliverance will arise for the Jews from another place, but you and your father’s house will perish. Yet who knows whether you have come to the kingdom for such a time as this? (Esther 4:14)

Discover more about the Ark project at ArkEncounter.com, and watch for our stunning 30-second TV spot promoting the Ark Encounter!