Yesterday’s announcement by Governor Steve Beshear of Kentucky that Answers in Genesis and the Ark Encounter, LLC will build a full-scale Noah's Ark in northern Kentucky drew wide media attention.

The announcement by Governor Steve Beshear of Kentucky that Answers in Genesis will be partnering with the Ark Encounter, LLC of Missouri to build a full-scale Noah's Ark in northern Kentucky drew wide media attention yesterday. Below is a follow-up news release that we distributed nationwide this morning through our publicist. Meanwhile, spend time on our new website of ArkEncounter.com and discover more about the Ark Encounter— nine themed attractions, with a full-scale Ark (made out of wood and according to the biblical dimensions) as the centerpiece.

Major articles on the Ark Encounter have been appearing in U.S. newspapers and prominent websites (e.g., as one of the main articles for several hours on the well-trafficked MSNBC.com site, although the article mistakenly called the themed attraction an “amusement” park when there will be no roller coasters or other thrill rides), and an Associated Press article is now being syndicated to papers and websites. So we expect to see even more coverage across the nation today.

Ark Encounter to Open in Northern Kentucky in 2014

FRANKFORT, Ky., Dec. 2, 2010—Kentucky Governor Steve Beshear and the Ark Encounter, LLC announced Wednesday plans for a major new tourist attraction in the Northern Kentucky region: a full-scale Noah’s Ark. Partnering with the Ark Encounter is Answers in Genesis, which is most widely known for its high-tech and well-attended Creation Museum in Petersburg, Ky. 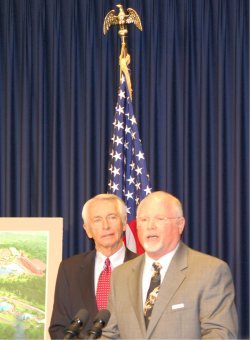 Kentucky Gov. Steve Beshear and Mike Zovath, Senior Vice President of Special Projects for Answers in Genesis, announce plans for the Ark Encounter at the state capitol in Frankfort Wednesday.

At a packed press conference, Gov. Beshear emphasized his commitment to bring jobs to Kentucky as a result of strengthening the language in the Tourism Development Act. “Make no mistake about it, this is a huge deal to Grant County, to northern Kentucky and to the entire Commonwealth. As I indicated earlier, we strengthened the Tourism Act to help us create jobs and attract visitors, which this project clearly does,” he said.

Gov. Beshear also announced that the Ark Encounter had submitted all of the necessary applications to take advantage of the sales tax reimbursements offered for tourist attractions. He said this incentive in the Tourism Act is what drew the Ark Encounter LLC to Kentucky. “We are eager to work with Ark Encounter officials to make this exciting project happen, and we look forward to its completion,” he concluded. The Ark Encounter is scheduled to open in spring 2014, on about 800 acres off I-75 in Grant County, Ky., south of Cincinnati, Ohio. The land is under contract and the sale is expected to be finalized soon.

The for-profit Ark Encounter project will be privately funded, with an estimated cost of $149.5 million. Noah’s Ark itself will be built at a cost of $24.5 million, which will come from donations through Answers in Genesis and its “Ark Pegs, Planks & Beams” program. The additional $125 million for the rest of the complex will be contributed by the for-profit LLC.

A feasibility study conducted by the respected America’s Research Group has indicated that the Ark Encounter may attract 1.6 million visitors in the first year and is expected to employ up to 900 full- and part-time staff. Theme park executive Cary Summers, CEO of Nehemiah Group and a consultant to the Ark Encounter LLC, said it was anticipated an additional 14,000 jobs would be created due to the addition of hotels and restaurants to the area, not to mention those hired during the 30- to 36-month construction phase. While he said, “we have the shovels in the car,” he anticipates the groundbreaking won’t occur until May or June, 2011.

Mike Zovath, Senior Vice President of Special Projects for Answers in Genesis, emphasized the environmentally friendly construction methods that will be used to construct the Ark. “We are really excited about taking care of the environment in that way,” he said, mentioning the project might be the largest “green” facility in the U.S., employing many Leader in Energy and Environmental Design (LEED) building techniques. He also committed to using local contractors and building materials as much as possible, further contributing to the local economy.

Grant County Judge-Executive Darrell Link expressed his gratitude for the economic boon the project will bring to the region, stating that the announcement had extended his Thanksgiving for another week. "Along with this Ark, I anticipate that there is going to be a rainbow," he said, "and at the end of that rainbow is a pot of gold."

In addition to the full-size Ark, the complex will include eight other themed attractions, including a walled city much like was found in ancient times, live animal shows, a kids’ interactive play area, a replica of the Tower of Babel with exhibits, a 500-seat 5-D special effects theater, an aviary, and a first-century Middle Eastern village.

For information on the Ark Encounter, plus to watch a video of the news conference and view pictures of the project, see www.ArkEncounter.com

See how you can participate in the Ark Encounter with a donation through a unique sponsorship program. Become a part of this thrilling project by going to ArkEncounter.com 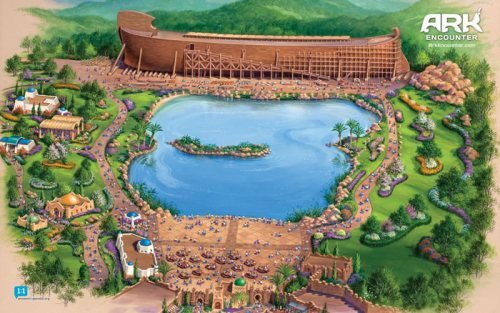