Answering Objections to the Prolife View

This is Ken Ham, author of the kids’ books The Dinosaurs of Eden and D is for Dinosaur. 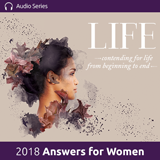 A so-called “pro-choice pastor” recently argued that a patient’s room is too small for a woman, her doctor, and the government. In other words, abortion is a woman’s choice and there shouldn’t be any laws about it.

But this so-called pastor forgot about three others:

Two: the baby! This isn’t just a discussion about whether a woman should have her tonsils removed! It’s about a living human being, growing in her womb.

And three: God is there! Our Creator . . . who formed that baby “fearfully and wonderfully” in his image . . . has said “do not murder.”