Does Genetics Support an Old-Earth Timeline?

This is Ken Ham, CEO of the global apologetics ministry of Answers in Genesis. 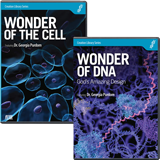 Yesterday we learned that the rate at which mistakes pile up in our mitochondrial DNA contradicts evolutionary ideas. You see, if humans really have been around for hundreds of thousands of years, we’d expect to see major differences between people and hundreds of mutations. But, we don’t!

But here’s what it does show: it does support a biblical timescale of just a few thousand years.