This is Ken Ham, author, speaker, and blogger on science and the Bible’s reliability. 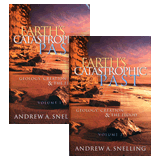 Every year, billions of tons of dirt end up on the ocean floor. If that debris has been accumulating for three billion years, the seafloor should have sediment many, many miles deep. But it doesn’t!

Now, some of those sediments are removed each year due to natural processes. But at current rates, the seafloor would accumulate today’s thirteen hundred feet of sediment in just twelve million years—that’s nowhere near the three billion years the oceans have supposedly been around!

The evidence makes sense when we understand we live on a young earth—which was marred by a flood, that would’ve deposited hundreds of feet of sediment very rapidly.