250 Million Years of No Evolution?

This is Ken Ham, coauthor of the book called A Flood of Evidence. 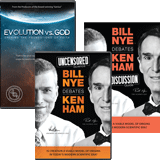 A number of years ago, scientists discovered bacteria in a salt crystal. They believed those bacteria were 250 million years old. Amazingly, the scientists were able to “resurrect” them. And to their complete surprise, they observed that the DNA looked almost identical to bacterial DNA today. So two-hundred-fifty-million years of no evolution?

These “Lazarus bacteria” are a challenge for evolutionists—but not for creationists. The salts these bacteria were found in were likely laid down during Noah’s flood. That was only a few thousand years ago.

It’s no shock to those who start with the true history given in God’s Word!