This is Ken Ham, publisher of the Answers apologetics magazine for the whole family. 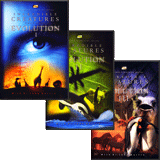 Where did dinosaurs come from? Many Christians struggle to answer this question. But it’s not a hard question if we use the Bible as our starting point.

Genesis 1 says God created all the land animals on day six of creation week. Dinosaurs, by definition, are land animals, so they must’ve been created on day six. That’s the same day as Adam.

Now, because of the detailed genealogies in Genesis, we know there were two thousand years from Adam to Abraham. And we know it’s been four thousand years since Abraham. So, dinosaurs were created around six thousand years ago, with the rest of creation.

Dinosaurs are only a mystery if we ignore God’s Word.