This is Ken Ham, of the Ark Encounter and Creation Museum, with many dinosaur fossils and displays. 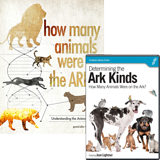 Did you ever wonder if there were dinosaurs on the ark?

Well, Genesis tells us that Noah took two of every kind of land-dwelling, air-breathing animal on the ark. Since dinosaurs meet the description, they must’ve come to Noah to go on the Ark. But how’d he fit them on?

Well, the average dinosaur was only the size of a buffalo. We hear a lot about the big ones, but most were quite small. And, for the really big ones, Noah could’ve taken younger, smaller ones on the ark. They’d eat less, take up less space, and reproduce better after the flood. So it makes sense God would’ve sent juveniles to Noah.

It’s no problem explaining dinosaurs on the ark!