This is Ken Ham, heading up the ministry that’s built a 510-foot-long Noah’s Ark. 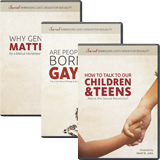 When it comes to the question of gay “marriage,” God’s Word is clear. God’s design is one man for one woman … for life. So why are there so many Christians confused about this issue? Well, it’s the same reason that so many are confused about the age of the earth and the creation versus evolution issue. It’s not because Scripture isn’t clear—it is. It’s because they’re taking things from outside the Bible and then reinterpreting the Bible.

For so many Christians, God’s Word isn’t really the authority. Instead … we are. When we take things from outside the Bible and use it to reinterpret the clear teaching of God’s Word, we’re making ourselves the authority, instead of God.