This is Ken Ham, a missionary to our evolutionized culture . . . and even the church. 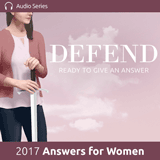 The Bible mentions there are many “infallible proofs” of Christ’s resurrection. Now, these proofs are his many appearances after he arose. He didn’t appear just once or even twice—he appeared at least ten separate times to hundreds of people. Then he ascended into heaven!

While he met with his followers, Christ talked and ate with them. They worshipped him—and even touched him. He so convinced his disciples and others that he really was alive that they were willing to die for teaching others that Christ was raised to life.

People won’t die for a lie. The disciples didn’t invent a risen Savior. They preached it because they knew Jesus was alive.