How Did We Get the Idea of Millions of Years?

This is Ken Ham, an Aussie transplant with a passion for God’s Word . . . and the gospel. 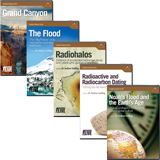 The modern idea that the earth is millions of years old is actually a new idea. For most of church history, people started with God’s Word and believed the history in Genesis. And the earliest geologists believed the rock layers and fossils were the result of Noah’s Flood . . . just a few thousand years ago.

Well eventually many scientists abandoned the biblical view because they rejected the Bible. Now, this wasn’t because geology showed the Bible was wrong. It was because they had already decided they didn’t believe the Bible—before they ever looked at the rocks!

But today many scientists are realizing that the Bible explains geology . . . and are returning to the truth of the history recorded in God’s Word.