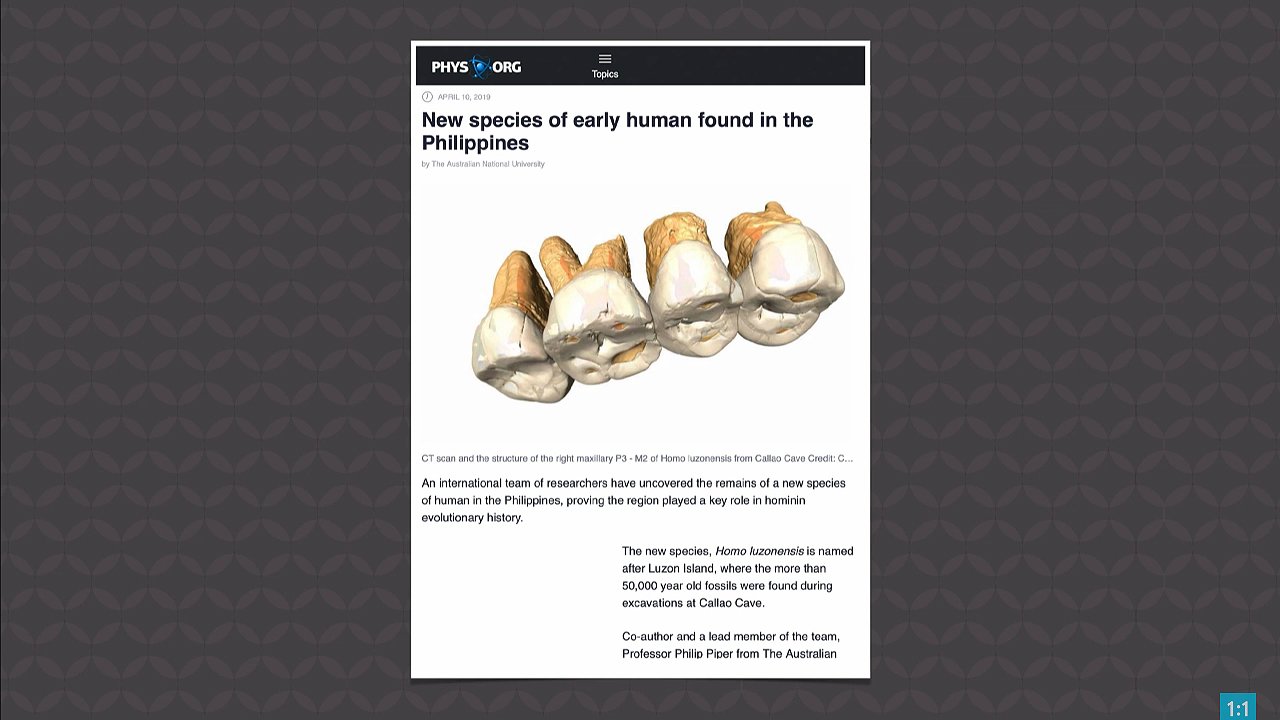 Headlines around the world trumpeted the news last week, “New species of early human found in the Philippines.” This “new species,” based on a collection of fossils found in a cave on the island of Luzon in the Philippines, has been named Homo luzonensis and has been dated to about 50,000 years. How should we as biblical creationists understand this find?

Even in their own evolutionary view, the researchers can’t say this fossil tells us anything about the evolution of modern humans.

Well, first off, notice the date—50,000 years. According to the current evolutionary timeline, anatomically modern humans (that is to say, Homo sapiens), evolved some 200,000–300,000 years ago. That means, according to evolutionary beliefs, modern humans were alive at the same time as the newly named Homo luzonensis. Therefore, it’s not a human ancestor but is considered a human relative. So, even in their own evolutionary view, the researchers can’t say this fossil tells us anything about the evolution of modern humans.

Also, it’s worth noting that one of the fossils in the collection was dated at 67,000 years and others were dated at 50,000 years—and yet they are assumed to be representatives of the same species, despite an alleged 17,000-year gap! Of course, as we have pointed out time and time again, such dating methods are rife with unprovable assumptions.

What the scientists discovered was a fossil collection representing at least three individuals, not necessarily related. The fossils in the collection include a third metatarsal (a foot bone, discovered 12 years ago, in 2007), two manual phalanges (finger bones–2011), two pedal phalanges (toe bones–2011), a femoral shaft (part of a femur–2011), and seven post-canine teeth (discovered in 2011 and 2015).

Based on these fossils, can the scientists determine authoritatively what creature this was? They say it’s Homo, belonging to our genus. But interestingly, as this BBC article from 2016 lays out, there’s actually no official or formal description for what belongs in our genus. Different scientists use different criteria, which results in controversy and debate.

It’s also worth noting that all of the features that easily distinguish Homo from an ape (such as skull, pelvis, tools, or art) are missing from this find. Whenever scientists are classifying a fossil find (particularly a scanty one), the designation of Homo or not-Homo is somewhat arbitrary, almost always disputable, controversial, and laden with evolutionary assumptions.

Is this small collection of toe, foot, and finger bones, teeth, and a broken femur a representative of Homo? No, it’s not.

So is this small collection of toe, foot, and finger bones, teeth, and a broken femur a representative of Homo? No, it’s not.

Dr. David Menton, an anatomist, award-winning former professor at Washington University School of Medicine in St. Louis, and now a speaker and researcher with Answers in Genesis studied the paper and concluded, “This is absolutely not Homo. It’s an ape.” Dr. Menton notes that the finger and toe bones bear no resemblance to human fingers and toes, but do resemble the highly curved fingers and toes of Australopithecus (this genus includes the famous Lucy, who is an extinct species of ape).

He writes of each fossil find:

Metatarsal bone (right 3rd): Discovered in 2007 and was declared to be of the genus Homo even though there is much disagreement among evolutionists about what constitutes Homo even when you have the whole skeleton. The metatarsal is described by the authors as having a “marked dorso-plantar convexity for the lateral cuneiform” of a type “which is very uncommon in hominins” but is found in the “fourth metatarsal of Australopithecus sediba.” Australopithecines (southern apes) are apes as their name implies. No compelling reason to consider this bone from Homo.

Femur (left): This fossil bone is missing both the proximal and distal ends and thus consists of a tubular bone element (diaphysis). This gives essentially no information about locomotion or even classification within primates. The authors make no specific claims for this femur other than suggesting that it is from a growing juvenile individual.

Finger: They found an intermediate and distal manual phalanx (the two small bones distal to the knuckle).

The intermediate manual phalanx is highly curved and flattened in shape such as you see in suspensory adapted tree dwelling primates. The authors say that the intermediate phalanx has a “longitudinally curved and dorso-palmarly compressed shaft” that “shares shape affinities with Australopithecus.” This is clearly not a human finger.

The distal manual phalanx is described by the authors as having “proportions unlike those of early Homo/Paranthropus, Homo naledi, H. florensis and H. neanderthalensis.” This is clearly not a human finger.

Toe: They found a proximal and intermediate pedal phalanx (the two small bones of the toe not including the one on the distal end).

The proximal pedal phalanx is highly curved and flattened in shape such as you see in arboreal primates. The authors say the proximal pedal phalanx “shares shape affinities with Australopithecus: marked longitudinal curvature, parallel medial and lateral sides in dorsal view, a small bicondylar head and weak dorsal canting of the proximal articular surface,” and point out that this is unlike Homo sapiens or other species of Homo. This is clearly not a human toe.

Teeth: The authors considered the premolars to be noticeably large relative to the molars and “unlike the patterns seen in other hominins except Paranthropus,” a very ape-like creature. They point out that the premolars “display several primitive features. . . . [the] premolars have multiple roots that are robust and highly divergent, an archaic condition typically found in Australopithecus.” The authors conclude: “In terms of absolute tooth size and premolar-molar proportions H. luzonensis shows a pattern not seen elsewhere in the genus Homo.”

Reading the paper, one is puzzled about what led the authors to conclude that the small collection of teeth and bones found in a cave over a period of 12 years belongs to the genus Homo.

The paper itself essentially admits this view, using frequent statements about how similar certain features are to Australopithecus (that is, ape). If it wasn’t for the evolutionary story that must be told, no one would doubt (particularly based on the hands and toes) that this is an ape:

“In terms of absolute tooth size and premolar–molar proportions, H. luzonensis shows a pattern that is not seen elsewhere in the genus Homo.

“The latter feature, which is very uncommon in hominins, has been reported . . . in a fourth metatarsal of Australopithecus sediba.

“All of these features are typically found in combination in Australopithecus.

“The morphology of the proximal pedal phalanges of H. floresiensis has also been described as Australopithecus-like in some respects . . . however, the combination of features found in CCH4 is essentially indistinguishable from the features of A. afarensis and A. africanus as shown by a 3D geometric morphometric shape analysis.”

Dr. Gabriela Haynes, a paleontologist who works with our research department, stated of the find:

The portions of the paper, “Diagnosis” and “Description and Comparison of the fossil elements,” point to characteristics that show similarities to Australopithecus, Paranthropus, or “early” Homo, as they call it, which would be ape-like. But despite all that, they keep pushing the idea of a new species for the genus Homo.

The “human relative” designation is nothing more than evolutionary hype.

If you ignore the evolutionary interpretation imposed on the evidence, it’s obvious Homo luzonensis is anything but Homo—it’s an ape. The “human relative” designation is nothing more than evolutionary hype.

I discussed this item today on Answers News with cohosts Dr. Gabriela Haynes and Avery Foley. Answers News is our twice-weekly news program filmed live before a studio audience here at the Creation Museum and broadcast on my Facebook page and the Answers in Genesis Facebook page. We also covered the following intriguing topics:

Watch the entire episode of Answers News for April 15, 2019.