Image by Luis Argaiz, via Unsplash.

The Eye—It Easily Evolved (If You Don’t Look Closely) 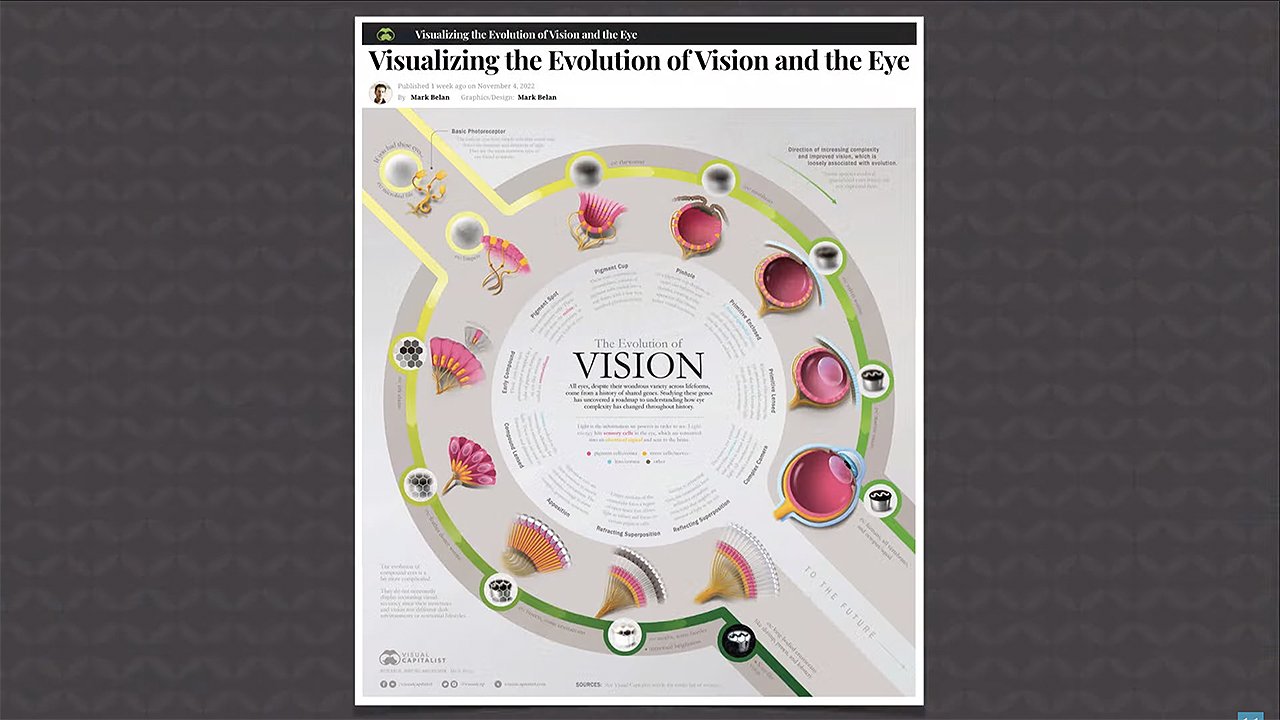 “All eyes, despite their wonderous variety across lifeforms, come from a history of shared genes.” This statement comes from an article published recently with a detailed graphic highlighting the supposed evolution of the eye from basic photoreceptors to the complex camera eye of vertebrates. But there’s just one problem—they don’t actually show any evolution!

If you look at the graphic, it’s laid out exactly how you’d supposedly expect—“simple” eyes at the beginning that diverge into the two basic vision forms (simple and complex), and along these two evolutionary paths, the eyes become increasingly complex—at least that’s what it looks like unless you are paying attention.

If you think critically about the illustration, you’ll notice that, with each supposed evolutionary leap, the illustrators provide an example of a living creature with that type of eye. In other words, each example is of a fully formed and functioning eye!

If you think critically about the illustration, you’ll notice that, with each supposed evolutionary leap, the illustrators provide an example of a living creature with that type of eye. In other words, each example is of a fully formed and functioning eye! They don’t provide any “missing links” of eyes that are slowly becoming a different sort of eye. They show eyes that are fully formed and functioning, providing exactly what that creature needs for the environment it lives in. Then, in the text around each example, they describe how they imagine each eye form evolved from the eye form before it.

But no evolution is actually observed in any of these examples! The only evolution you can find is in the text! Evolution is just assumed to be the explanation for how these different forms of vision, each of which is complex and marvelously suited for the environment that particular creature lives in, came to be. In other words, they imposed their evolutionary belief on the evidence and then claimed the evidence supports evolution.

How might such massive changes have happened? They explain,

The earliest form of vision arose in unicellular organisms. Containing simple nerve cells that can only distinguish light from dark, they are the most common eye in existence today.

The ability to detect shapes, direction, and color comes from all of the add-ons evolution introduces to these cells.

Two major eye types are dominant across species. Despite having different shapes or specialized parts, improved vision in both eye types is a product of small, gradual changes that optimize the physics of light.

Simple eyes evolved from a pigment cup, slowly folding inwards with time into the shape we recognize today. Specialized structures like the lens, cornea, and pupil arose to help improve the focus of light on the retina. This helps create sharper, clearer images for the brain to process.

Oh, that’s how—they just “arose” by “small, gradual changes.” Keep in mind, eyes are enormously complex, and you don’t just need to evolve an eye for vision—you need a brain to interpret what the eye is seeing, you need specialized fluid to protect the eyes from dust and bacteria, you need translucent skin over the eye so you can see through it, and so much more!

The addition of brand-new genetic information for new forms and features has never been observed—and yet you must have that for new features to arise!

What they never explain in the article is how the genetic information to build our eyes was formed by natural processes. The addition of brand-new genetic information for new forms and features has never been observed—and yet you must have that for new features to arise! But those who made this graphic and wrote the article clearly don’t understand that because they (1) never address how that possibly could have happened in the article and (2) they end the article speculating about the future of eye evolution,

Our increasing dependency on technology and digital devices may be ushering in the advent of a new eye shape.

The muscles around the eye stretch to shift the lens when staring at something close by. The eye’s round shape elongates in response to this muscle strain…

Other evolutionary opportunities for our eyes are currently less obvious. It remains to be seen whether advanced corrective therapies, like corneal transplants or visual prosthetics, will have any long-term evolutionary impact on the eye.

Yes, our use of digital devices might change our eyes—but such changes don’t impact the human genome. In other words, the muscle strain of staring at a smartphone isn’t inherited by future generations from their parents, so how can this create a “new eye shape” and impact human evolution? It’s a misunderstanding of genetics and biology!

Eyes didn’t evolve. In his Word, God himself takes the credit for creating them—and those who refuse to recognize his obvious hand in what he’s made are without excuse:

The hearing ear and the seeing eye,
the Lord has made them both. (Proverbs 20:12)

For his invisible attributes, namely, his eternal power and divine nature, have been clearly perceived, ever since the creation of the world, in the things that have been made. So they are without excuse. (Romans 1:20)

This item was discussed today on Answers News with cohosts Rob Webb, Patricia Engler, and Dr. Georgia Purdom. Answers News is our weekly news program filmed live before a studio audience here at the Creation Museum and broadcast on my Facebook page and the Answers in Genesis Facebook page. We also covered the following topics:

Watch the entire episode of Answers News for November 14, 2022.