Part 1 defined the meaning of the rich Hebrew word חֶסֶד (ḥéseḏ), the main term used to describe the love of God. Part 2 answered the accusation that the God of the Old Testament is not a God of love. We now turn our attention to the ultimate expression of God’s love in the person of Jesus Christ.

On into the New Testament

In light of all the references in the Hebrew Scriptures to the rich quality, magnitude, and longevity of God’s חֶסֶד (ḥéseḏ) the opening words of John’s gospel are completely natural, following on seamlessly from the message of the Old Testament:

And the Word became flesh and dwelt among us, and we beheld His glory, the glory as of the only begotten of the Father, full of grace and truth. . . . And of His fullness we have all received, and grace for grace. (John 1:14, 16)

Jesus, the Word, fully expressed the loving heart of the Father:

Indeed, the very reason Jesus came into the world was as a result of the great love of Israel’s God, and on a mission to fully express His mercy:

In Jesus, God was fully taking the initiative. He did not wait for us to attempt to claw our way back to Him. In any case, all such attempts are futile. In comparison to the holiness, purity, and perfection of God, “all our righteousnesses are like filthy rags” (Isaiah 64:61). Indeed,

. . . God demonstrates His own love toward us, in that while we were still sinners, Christ died for us. (Romans 5:8)

The believer, therefore, can say along with Paul,

For we ourselves were also once foolish, disobedient, deceived, serving various lusts and pleasures, living in malice and envy, hateful and hating one another. But when the kindness and the love of God our Savior toward man appeared, not by works of righteousness which we have done, but according to His mercy [ἔλεος (éleos)] He saved us . . . (Titus 3:3–5)

But God’s love goes even further than pardoning sin:

But God, who is rich in mercy [ἔλεος (éleos)], because of His great love with which He loved us, even when we were dead in trespasses, made us alive together with Christ . . . that in the ages to come He might show the exceeding riches of His grace in His kindness toward us in Christ Jesus. (Ephesians 2:4–5, 7)

He desires to richly and abundantly bless the repentant sinner. That’s grace! Someone once defined grace using the acronym:

It’s a good explanation. Through the precious blood of Christ the repentant sinner is not only redeemed (1 Peter 1:18–19), not only washed from his sins (Revelation 1:5), not only cleansed in his conscience (Hebrew 9:14),

But now in Christ Jesus you who once were far off have been brought near by the blood of Christ. (Ephesians 2:13)

God’s love, in Jesus, can bring us back into the rich blessings of a close relationship with Him.

Some people may feel that they are unworthy of such attention from God, that they are beyond forgiveness—a hopeless case. The fact is that none of us is deserving of God’s astonishing חֶסֶד (ḥéseḏ). But it dishonors and displeases Him if we do not accept it with thankful, trusting hearts. God actually takes pleasure in saving, delivering, redeeming, forgiving, healing, cleansing us from a guilty conscience, drawing us close to Him, and empowering us with His wonderful Holy Spirit! To spurn such love is the ultimate offence.

In this article, we have so far contemplated God’s goodness as expressed in His חֶסֶד (ḥéseḏ). Many contemporary preachers will gladly proclaim this doctrine, while at the same time striving to avoid offending unbelievers with the threat of judgment and hell. But a Christian message that presents only God’s love is not the whole truth, and is not therefore honoring to the One who is full of both love and truth. Sadly, universalism—the belief that ultimately everyone will be saved and have a place in heaven—is becoming increasingly the vogue, even among many evangelicals. Popular pastor and teacher Rob Bell denies being a universalist, but his best-seller, Love Wins, certainly represents a big step away from orthodox teaching about hell.2

It is only right and balanced, in addition to His love, to seriously ponder God’s severity:

By “severity” Paul is not meaning that God is too strict, or that He punishes unjustly or inconsistently; neither is he implying that God shows favoritism. The word here translated as “severity,” ἀποτομία (apotomía), might equally be rendered “steepness” or “sharpness.” The former is reminiscent of the “great gulf” or chasm that Jesus mentions as existing between heaven and hell (Luke 16:26). The latter is consistent with the picture of a decisive and accurate cutting action, like a scythe at harvest-time; indeed, in the very same verse, Paul writes of unbelievers being “cut off” (Romans 11:22).

God’s judgment is flawless. He makes no mistakes. Hell is a deeply tragic, but nevertheless appropriate, outcome for any human beings whose hearts are hardened against the conviction of the Spirit of God in their conscience, failing to acknowledge Him; neglecting to thank, honor, praise and worship Him; rejecting His Son and spurning His love; rebelling against Him, flouting His standards, and breaking His laws; despising His glory; belittling Him, maligning Him, misrepresenting Him, and even blaspheming and cursing Him. If people choose to live a God-less life, enjoying all the benefits and blessings of His creation, yet preferring to remain alienated from Him, how could they expect anything other than a God-less eternity, together with His justified anger?

For the wrath of God is revealed from heaven against all ungodliness and unrighteousness of men, who suppress the truth in unrighteousness, because what may be known of God is manifest in them, for God has shown it to them. For since the creation of the world His invisible attributes are clearly seen, being understood by the things that are made, even His eternal power and Godhead, so that they are without excuse, because, although they knew God, they did not glorify Him as God, nor were thankful . . . (Romans 1:18–21)

Consider, then, God’s severity: how utterly terrible to be cut off completely from His presence and suffer the horrors of hell! Consider, also, His goodness and love: how wonderful to be offered a let-off; how kind and merciful He is to allow our deserved punishment to fall upon His most precious Son!

For God did not send His Son into the world to condemn the world, but that the world through Him might be saved. He who believes in Him is not condemned . . . (John 3:17–18)

. . . he who does not believe is condemned already, because he has not believed in the name of the only begotten Son of God. (John 3:18)

For He is coming to judge the earth. With righteousness He shall judge the world, and the peoples with equity. (Psalm 98:9)

He who rejects Me, and does not receive My words, has that which judges him—the word that I have spoken will judge him in the last day. (John 12:48)

And as it is appointed for men to die once, but after this the judgment. (Hebrews 9:27)

[Men] will give an account to Him who is ready to judge the living and the dead. (1 Peter 4:5) 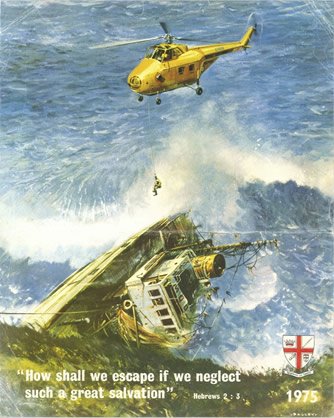 As a boy I attended the Crusader3 Bible Class in my hometown of Reigate in the south of England, United Kingdom. Each year we were presented with a colorful motto poster with an appropriate Scripture. I will never forget the impact of the one we were given when I was about ten years old. It was an exciting picture of a rescue helicopter hovering over a ship that was listing dangerously, stuck against a shoreline, being pounded by huge waves. A brave rescuer is being winched down to haul crewmembers to safety. The caption reads,

How shall we escape if we neglect such a great salvation (Hebrew 2:3)

Since Adam and Eve’s transgression in Eden, all of humanity has gotten itself into a mess because of rebellion against God and breaking His laws. None is exempt. All have sinned, and no one is fit to enter the presence of God’s glory (Romans 3:23). Individually and collectively we are “sinking.” But God, in His supreme love and mercy, was willing, at great cost, to launch the ultimate rescue operation. Jesus took the full weight of punishment for our wrongdoing upon Himself when He laid down His life. He purchased for us the means of avoiding hell, of being forgiven, and of being made right with God:

But there is no agency of rescue other than Jesus Christ:

Nor is there salvation in any other, for there is no other name under heaven given among men by which we must be saved. (Acts 4:12)

This is the message of the Christian faith. It is the inspiration and driving force behind the ministry of Answers in Genesis. Our desire is that many will accept God’s rescue plan by trusting in the Lord Jesus Christ, and thereby come to know God’s extraordinary and wonderful חֶסֶד (ḥéseḏ).