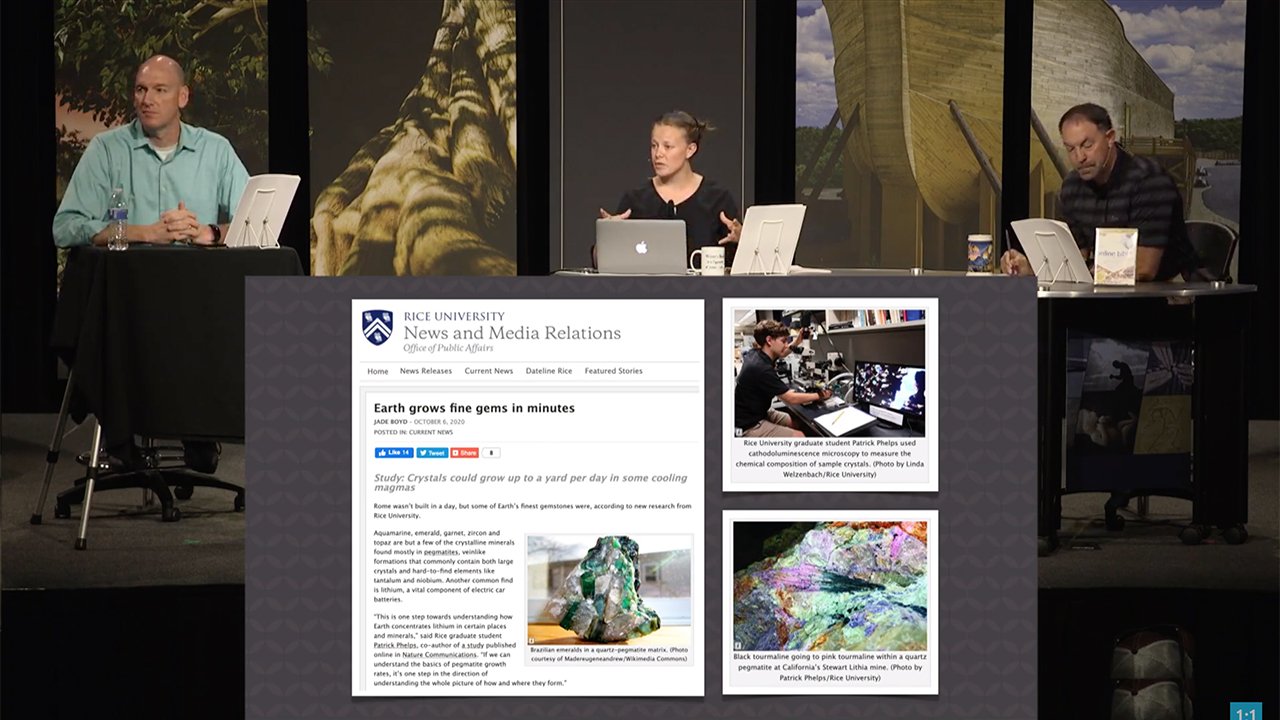 Emerald, aquamarine, topaz, zircon, and garnet are well-known gemstones. Also, lithium is used in batteries, like those found in an electric car. These minerals, and others, are found in “pegmatites, veinlike formations that commonly contain both large crystals and hard-to-find elements.” Many of these crystals are quite small, while others can be very large. How are they formed? And does it take long ages?

Well, as one researcher says, “The idea is that large crystals take time to grow.” But is that accurate? Over and over again the assumptions of slow-and-gradual processes over long periods of time have been overturned. And the formation of these crystals is no exception. According to a recent study, instead of taking long ages, “larger crystals … could grow in a matter of days.”

Crystal sizes in granites like those found in kitchen countertops are linked by evolutionary geologists to the cooling rate of the molten rock from which they crystallized. Thus, lavas that erupt from volcanoes cool rapidly within minutes to days to form basalts, which consist of minute crystals mostly only visible under a microscope. In contrast, huge bodies of molten rock that cool and crystallize under the ground are thought by evolutionary geologists to cool more slowly over 100,000-1 million years. The most well-known such rock is granite (seen everywhere in Yosemite National Park, California), with its visible crystals typically up to a half an inch or so in size. Another lesser known granitic rock is pegmatite.

Pegmatites are relatively small, linear rock bodies that often form associated with granites. A lot of water is dissolved in the molten rock (magma) from which granite forms. As the magma cools the minerals that crystallize to form granite – feldspars and quartz – do not soak up that water, and most of the metals and rare elements do not fit into those minerals’ crystal lattices. Thus, the leftover magma increasingly becomes very concentrated with water and such metals and rare elements. That makes it very fluid and easily squeezed into cracks which are then forced open by pressure. There the leftover watery magma crystallizes and cools very rapidly to produce the coarse-grained rock called pegmatite. The crystals in pegmatites, which can include gemstones such as tourmaline and emerald, and rare element minerals like spodumene (a major source of the metal lithium used to make the batteries in cell phones), are typically 1-3 inches long. However, the Etta pegmatite near Mount Rushmore (South Dakota) hosted a spodumene crystal 42 feet long!

How could such large crystals grow in pegmatite from what had to be a rapidly crystallizing, short-lived watery magma?

Herein though is a puzzle. How could such large crystals grow in pegmatite from what had to be a rapidly crystallizing, short-lived watery magma?

In a study just published in Nature Communications on October 5, 2020, Rice University, Houston, graduate student Patrick Phelps and geology Professor Cin-Ty Lee have upended such thinking and demonstrated that the large crystals in some cooling magmas grow within minutes to hours.

On the basis of their observations, along with known chemistry and physics, and sound math, they derived growth rates of 0.4-4 inches (10-100 mm) per day for the cores of the crystals and 3-33 feet (1-10 meters) per day for the outer zones! They therefore concluded that in the quartz crystals they investigated, the cores would have grown in less than 3 hours, and the outer zones, in less than 4 minutes! Furthermore, the largest crystals found in pegmatites would thus have grown in just days! And smaller gemstones such as tourmaline and emerald would also have grown in hours.

Can these results be also applied then to the growth of all the crystals in granites, thus necessitating the granites themselves formed within days? We are told that granite bodies take up to a million years to form, cool and crystallize. So, if true, this emphatically disproves the biblical age of the earth of only 6,000 years. These investigators simply deferred to this evolutionary geology dogma.

Much evidence is now available, however, that demonstrates granites could have formed within days, including the formation of polonium radiohalos within their black mica (biotite) crystals. After all, the catastrophic watery conditions during the year-long global Genesis flood cataclysm were totally unlike anything scientists have ever witnessed, and which in their unbiblical evolutionary worldview they ignore. Indeed, they are willingly ignorant of (and suppress) so much evidence around the globe for the Genesis flood cataclysm, such as the demonstrated rapid deposition of mudrocks and chalk (a type of limestone) in layers stretching around the globe and the rapid burial and fossilization of billions of animals and plants in graveyards, often exquisitely preserved even with soft tissues still intact. Careful scientific research continues to confirm what God’s inerrant Word teaches about the true history of the earth.

It teaches us that science always confirms God’s Word because the history in God’s Word is true, right from the very first verse.

What can we learn about this study on the formation of fine gems? It teaches us that science always confirms God’s Word because the history in God’s Word is true, right from the very first verse. So next time you see a beautiful gemstone glittering on a piece of jewelry, be reminded—God’s Word is true. And think in terms of a 6,000 year old earth and a global Flood 4,300 years ago.

This item was discussed yesterday on Answers News with cohosts Avery Foley, Bodie Hodge, and Tim Chaffey. Answers News is our weekly news program filmed live here at the Creation Museum and broadcast on my Facebook page and the Answers in Genesis Facebook page. We also covered the following topics:

Watch the entire episode of Answers News for October 14, 2020.