Apparently spending time in outer space can actually lead to long-term changes in your DNA. A fascinating recent study on the world’s only identical twin astronauts, Scott and Mark Kelly, showed that spending nearly a year on the International Space Station (ISS) changes how your genes are expressed. 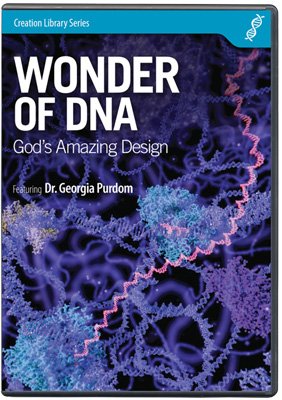 Learn from Dr. Georgia Purdom as she reveals how DNA bears the stamp of being designed and created by God.

Scott went to the ISS for 340 days while his retired, identical twin brother, Mark, stayed here on earth. When Scott returned, researchers compared his DNA to his brother’s. Identical twins have virtually identical DNA (though mutations that accumulate during your lifetime mean their DNA isn’t 100% identical), so this was an exciting way to study how time in space affects us.

Researchers found that Scott’s gene expression actually changed during his time in space. This altered his immune system, bone formation, eyesight, and more. Most of these changes reverted after he returned to earth, but about 7% of his gene expression remained altered!

Now, some websites, such as Live Science, initially reported that it was the genes themselves that changed, but even 7% (which seems like a small number) would be a massive change! (Keep in mind that the genetic difference between any two people on the planet is only 0.1%!) They later published a correction and emphasized that it was the gene expression—not the genes themselves—that changed. This means that his body emphasized or “quieted down” certain genes so that his body produced more or less of certain proteins that he needed.

This research highlights the remarkable ability God has given our bodies to adapt to our surroundings. Without us even consciously thinking about it, our body is switching genes on and off to help us cope with stressors and changes. What an incredible design feature! Yet most scientists believe this ability evolved by chance, random processes! I’m just glad they used intelligent design for the construction of the space station where astronaut Kelly lived for so long!

But, of course, this correction article from Live Science, when discussing the small amount of genetic differences between humans, dragged in the tired claim that we share 98% of our DNA with chimps. But that number is fallacious because it comes from ignoring large mismatched sections—a total of over a billion letters! And for the remaining matched DNA, scientists only count certain types of differences, allowing them to arrive at the very fallacious 98% similarity claim. And there are many other differences between our genomes outside the sequence level like gene expression discussed in this article. Live Science should print another correction article for making this mistake!

You can learn more in Dr. David DeWitt’s article, “What About the Similarity Between Human and Chimp DNA?”

We discussed this item on Answers News yesterday with regular cohosts Dr. Georgia Purdom and me, with guest Avery Foley, AiG staff writer. Answers News is our twice-weekly news program filmed live before a studio audience here at the Creation Museum and broadcast over my Facebook page. We also discussed the following topics:

Be sure to join us each Monday and Thursday at 2 p.m. (EDT) on my Facebook page for Answers News. You won’t want to miss this unique news program that gives science and culture news from a distinctly biblical and Christian perspective.