Do We Need a “Modern Alternative to Our Patriarchal Wedding System”? 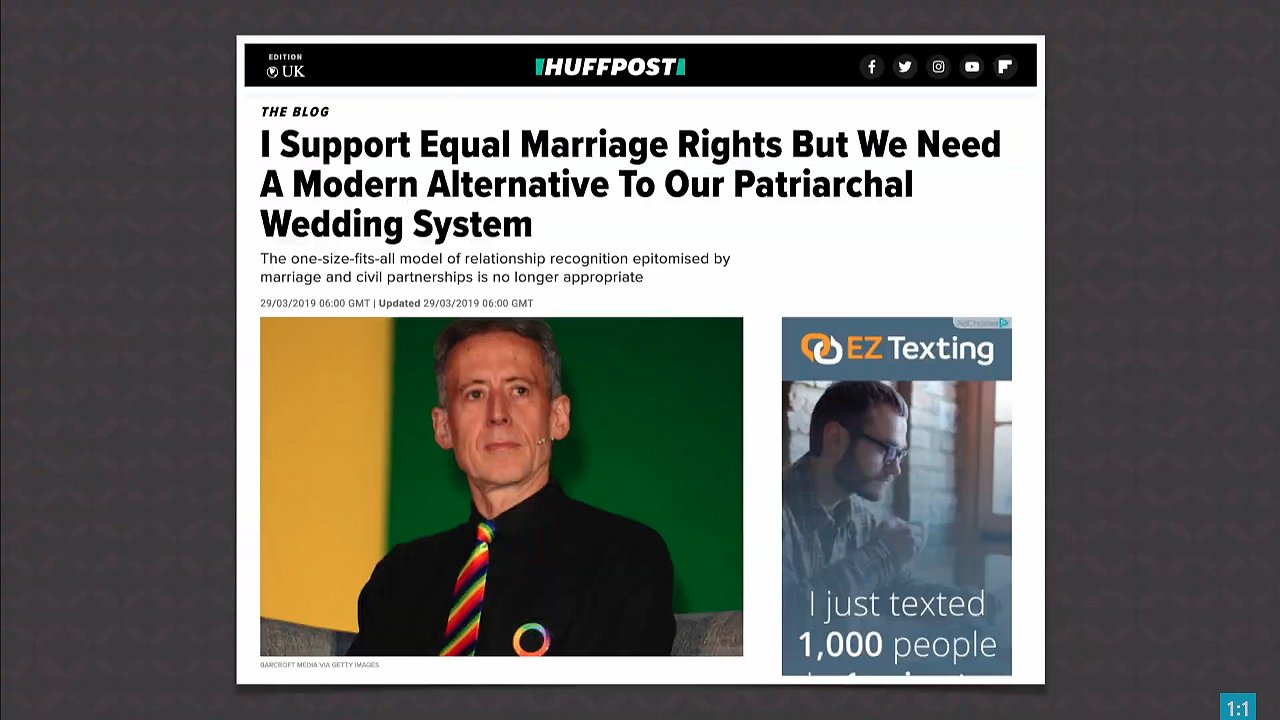 What is marriage? Well, according to an opinion piece in a UK publication by a described human rights campaigner, Peter Tatchell, it’s an outdated, patriarchal system that needs to be replaced. He argues that any two people (and why two? but we will get to that) who care about each other—whether that’s best friends, siblings, or others—should be allowed to form a “Civil Commitment Pact” (his replacement for marriage), giving legal recognition to their relationship.

Tatchell argues that the only difference between a husband and wife, and two best friends is that the former have sexual relations and the latter don’t. And why should we discriminate based on whether two people who care about and are loyal to each other have relations with one another?

The real issue here is a foundational one: who defines marriage?

The real issue here is a foundational one: who defines marriage? In Tatchell’s view, we do. Marriage is just some kind of cultural institution, and we can make it whatever we want because we created it and therefore we have the authority to change it however we want.

But we didn’t create marriage, so we don’t get to define it. God created marriage from the very beginning—it’s a God-ordained institution.

Because God created both humans and marriage, only he has the authority to define what it is and what it is not. And marriage is not about two people who care about each other but who are not husband and wife. And marriage is not just about two people who have sexual relations (as Tatchell would have us believe). Marriage is a unique, one-flesh union between one man and one woman, where a man and his wife leave father and mother and start a new family together (Genesis 2:24). Two friends who care about each other deeply (which is wonderful and can be a gift from God) is not marriage. Two men is not marriage. Two women is not marriage. God defines marriage—we don’t.

If we can redefine marriage to include same-sex couples, then why not redefine it yet again?

Tatchell’s proposal is the logical consequence of the redefinition of marriage because he rejects God’s Word. If we can redefine marriage to include same-sex couples, then why not redefine it yet again? And why stop at just two people? It’s very inconsistent of Tatchell to limit his proposed new unions, as he appears to do, to just two people! We will only continue to see the institution of marriage redefined as our culture shifts further from a biblical worldview and any acknowledgment of God as our Creator and Lawgiver.

We do not have the authority to redefine what God has created. Marriage is a one-flesh union—unique to any other relationship God created—that reflects God’s relationship with his bride, the church (Ephesians 5:31–32). Marriage, as God defined it, is between one man and one woman for life.

I discussed this item today on Answers News with co-hosts Dr. Georgia Purdom and Bryan Osborne. Answers News is our twice-weekly news program filmed live before a studio audience here at the Creation Museum and broadcast on my Facebook page and the Answers in Genesis Facebook page. We also covered the following topics:

Watch the entire episode of Answers News for April 11, 2019.