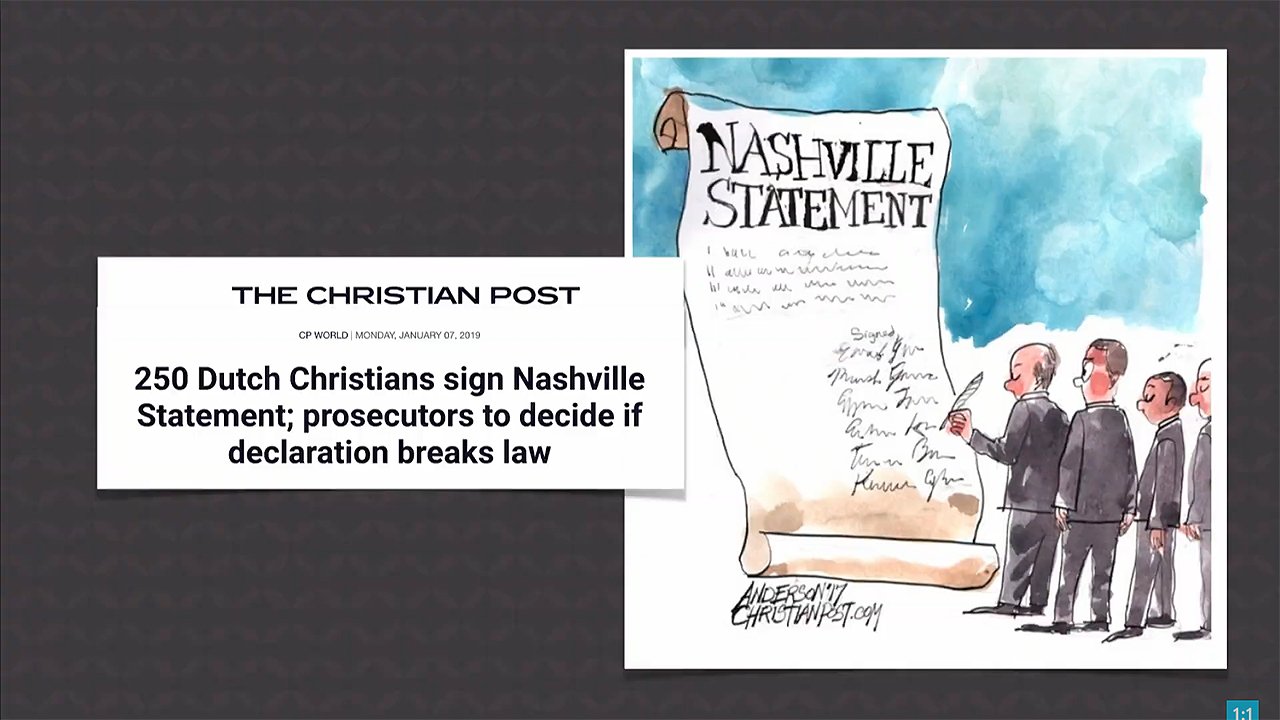 In 2017 a group of evangelical Christian leaders gathered in Nashville, Tennessee, to draft and sign a series of 14 affirmations and denials regarding human sexuality and marriage. This Nashville Statement—which I signed—affirms a biblical and historic Christian view of only two genders, male and female, and marriage as a lifelong union between a man and woman. Recently the Nashville Statement was translated into Dutch and signed by over 250 Christian leaders in the Netherlands—and now Dutch prosecutors are investigating to see if this breaks the law.

Yes, you read that right. Dutch prosecutors are investigating to see if the mere signing of a document that clearly delineates biblical truths Christians have accepted for 2,000 years is a violation of the law. That’s the world we now live in—that’s where the entire West is increasingly headed. And that’s where the USA is also going if the culture continues in the direction it’s heading.

There’s nothing harsh or unloving about the statement at all.

If you read through the Nashville Statement (and I encourage you to do so), you will see that it’s a document that is very clear on biblical truth—God created us male and female, and marriage is the lifelong union of one man and one woman. But you’ll also see that it is very loving in approach. The gospel is presented and upheld as the only hope for all people, including those who identify as LGBT. There’s nothing harsh or unloving about the statement at all. It’s simply a succinct declaration of what the Bible teaches regarding human sexuality, sin, and salvation in Jesus Christ.

And yet the signing of this document is being investigated as a potential crime. Religious freedom, freedom of conscience, the free exercise of religion—these are all being sacrificed on the altar of LGBT identity. And if you don’t think it’s happening here in the US, just like it is in very secular places like the Netherlands, just read the news. Religious liberties are also under attack here in the US by LGBT activists (and numerous atheist groups).

We shouldn’t be surprised that the secular world doesn’t understand Christians or biblical truth. The world is in rebellion against God, hates his Word, and hates the truth of the gospel. And they start with a different foundation of thinking—man’s word, not God’s Word. But no matter how much the world portrays our love for them (and for their souls) as hate instead, we need to continue to lovingly and boldly stand on biblical truth, sharing the gospel with all who will listen.

I discussed this item today on Answers News with co-hosts Dr. Georgia Purdom and Bodie Hodge, with a brief appearance by regular guest Avery Foley, AiG staff writer. Answers News is our twice-weekly news program filmed live before a studio audience here at the Creation Museum and broadcast on my Facebook page and the Answers in Genesis Facebook page. We also discussed the following topics:

Watch the entire episode of Answers News for January 14, 2019.