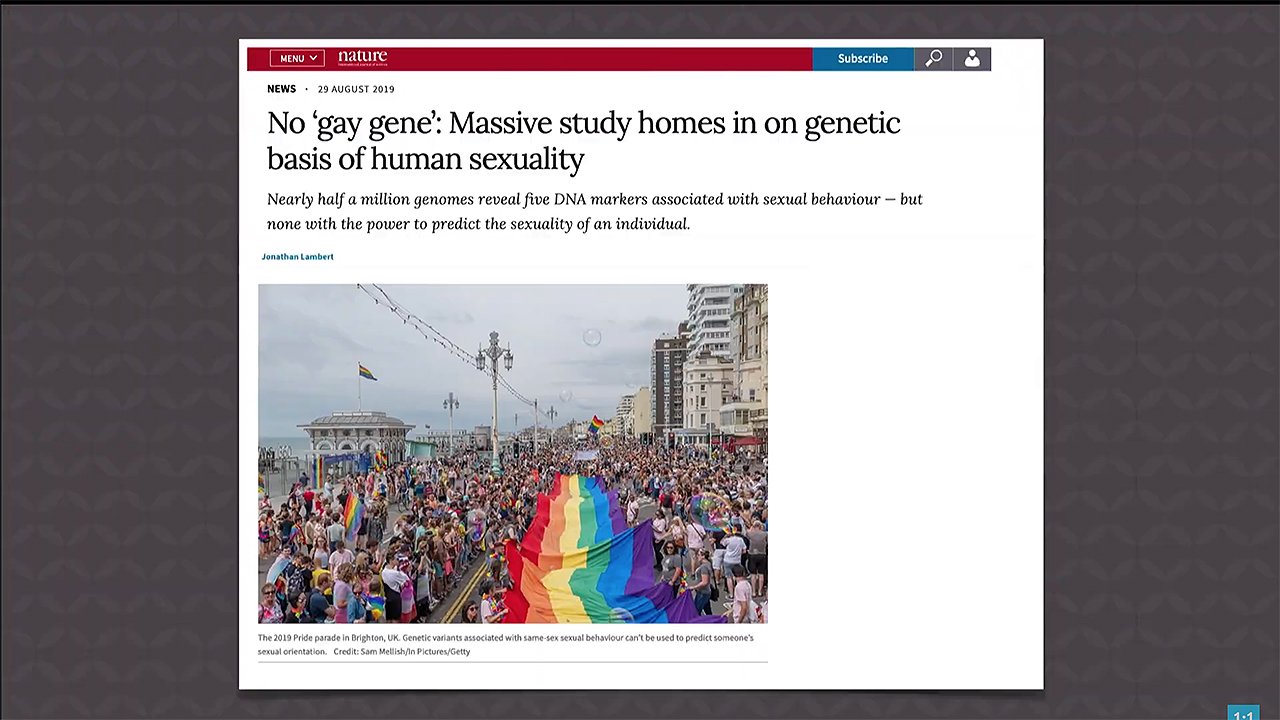 For decades, scientists have been searching for a so-called “gay” gene. Of course, this is more than just some dry academic pursuit. There’s a social and moral agenda behind it—that is, if somehow scientists can prove there’s a genetic “cause” for homosexual behavior, then some will argue that people are “born this way,” they have no control over their own desires and behaviors, and therefore no one can say what they’re doing is morally wrong.

Well, a new study has just emerged that argues there is no “gay” gene, but that there are genetic markers purportedly associated with homosexual behavior.

Genetics, however, can’t be used to predict sexual behavior, and this study wasn’t able to pinpoint which genes may have an influence.

This study of half a million genomes (of mostly older individuals of European descent, a major drawback to the study), estimates that “that up to 25% of sexual behaviour can be explained by genetics, with the rest influenced by environmental and cultural factors.” Interesting (and noteworthy), the article later says that “genetics could explain 8–25% of the variation in sexual behavior” (emphasis added). Genetics, however, can’t be used to predict sexual behavior, and this study wasn’t able to pinpoint which genes may have an influence. Researchers were, however, able to find just five genetic markers that, collectively, explained less than 1% of the “variation in sexual behavior.”

Obviously, this study has been very popular and generated a great amount of discussion. But it raises a fundamental question: If researchers did find some irrefutable link between homosexuality and genetics (which they have not in this study), would it ultimately even matter?

Well, no, it wouldn’t, because genetics doesn’t determine morality. Just because someone is predisposed to something because of genetics (e.g., alcoholism has been argued to have a genetic component), background, or environment, it doesn’t mean that particular desire or action is moral.

All of us have sinful hearts (Jeremiah 17:9) and a flesh that is in rebellion and direct opposition to the Creator and his good will for us. We’re all predisposed to sinful desires and behaviors. But that doesn’t determine morality!

We’re all predisposed to sinful desires and behaviors. But that doesn’t determine morality!

God alone sets the standard for right and wrong. And he has done that authoritatively in his Word. When it comes to homosexual behaviour, God’s Word is clear: It is a sinful desire and action (1 Corinthians 6:9–10). God’s design for marriage and sexuality is one man for one woman for life (Genesis 1:27, 2:24; Matthew 19:4–5). That’s it. There’s no room for “diversity” or “sexual variation,” whether that refers to homosexuality, transgenderism, adultery, polygamy, polyandry, pedophilia, “hook-ups,” or the host of other “variations” practiced and often celebrated in our culture.

Our culture preaches that true freedom is found in embracing your identity as a homosexual, bisexual, or another sinful behaviour. But that won’t bring freedom. The Scripture teaches that is slavery to sin (John 8:34), and real freedom comes from the truth (John 8:32–33). Through Jesus Christ and his work on the cross, there is hope and freedom for those who struggle with any sin.

Watch the entire episode of Answers News for September 9, 2019.

Previous Article Graffiti at the Creation Museum? Next Article Be Refreshed and Challenged with Truth at Answers for Women 2020