Male Rapist Who Identifies as "Female" Transfers to Women's Jail 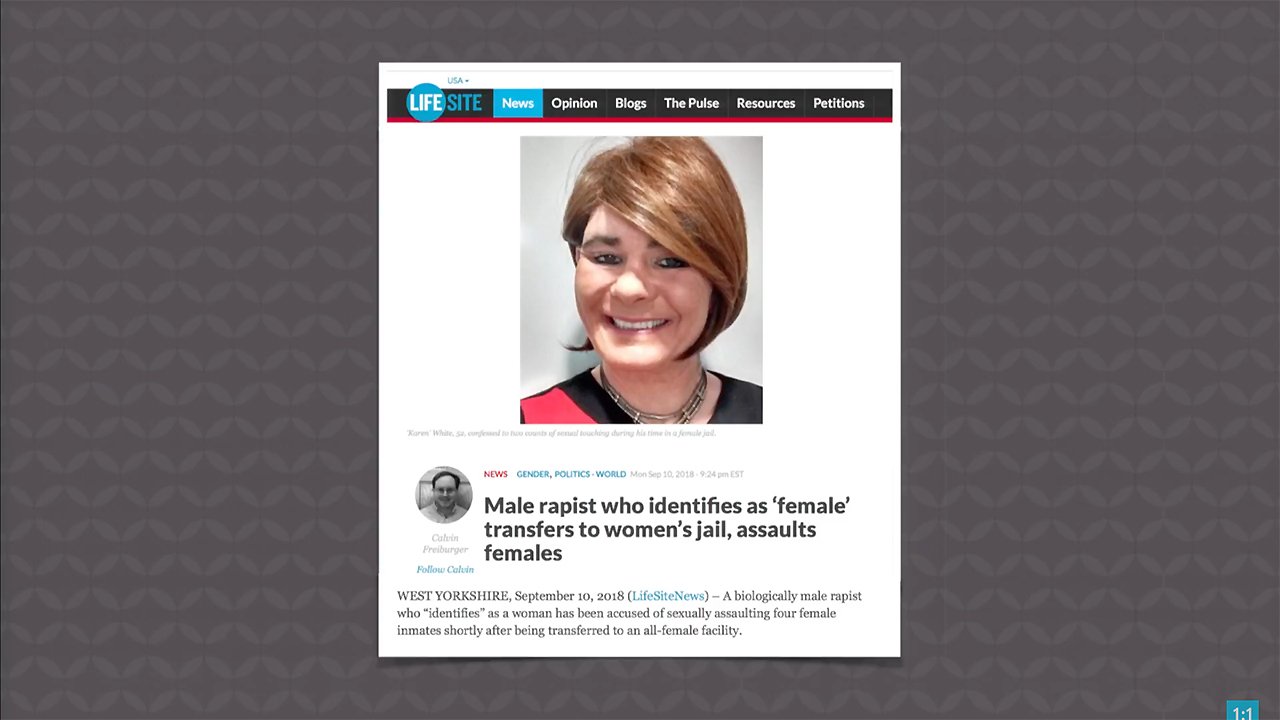 As society drifts further from a biblical worldview (based on the absolute authority of God’s Word), we see the tragic consequences highlighted in the news over and over again. A recent news item from England just reinforces the point. Stephen Wood, who identifies as a woman going by the name of “Karen White,” is a convicted rapist and pedophile, most recently arrested for stabbing his neighbor.

Because Stephen claimed to identify as a woman he was sent to New Hall Prison, a jail for women. Stephen is biologically 100% male and has had no chemical or surgical modifications. Now the insanity of sending a convicted rapist who is biologically male to a women’s prison could only lead to one outcome. You guessed it—Stephen used this as an opportunity to sexually assault four women in the prison. After the sexual assaults, Stephen was transferred to an all-male prison in Leeds.

A Prison Service spokesman then issued a statement: “We apologise sincerely for the mistakes which were made in this case. While we work to manage all prisoners, including those who are transgender, sensitively and in line with the law, we are clear that the safety of all prisoners must be our absolute priority.”

In a related opinion piece, author Ann Farmer wrote “With this sort of encouragement from those in authority, for whom public safety should be a first priority, this problem is not going to go away any time soon.” She then made a point that might be missed by many readers: “ . . . although it is unlikely that many ‘trans men’ (i.e. women who believe they are men) will seek to be transferred to men’s prisons— even if they claim to be rapists.” In other words, women are not likely to want to be put into an all-male prison, even if they identify as men, because they recognize their biological difference and know that they likely would be assaulted.

Even after the incident, reporters and prison officials still used feminine pronouns in referring to Stephen. Considering his offences this is not just outlandish but also deluded. In almost every country, prisons have been built and assigned as male or female facilities. This has obviously been done based on biological gender and also for proper administrative and safety reasons. Now the Bible is clear that there are only two genders—male and female (Genesis 1:27). When you deny Scripture and blur the lines between the sexes, you create confusion and open the door (as in this case) for sexual predators. I encourage you to check out the gender topic page on our website for several great articles on this subject which provide biblical answers to our confused culture.

This item was discussed today on Answers News with regular cohost Dr. Georgia Purdom and regular guest Bryan Osborne. Answers News is our twice-weekly news program filmed live before a studio audience here at the Creation Museum and broadcast on my Facebook page and the Answers in Genesis Facebook page. We also discussed the following intriguing topics:

Watch the entire episode of Answers News for September 24, 2018.