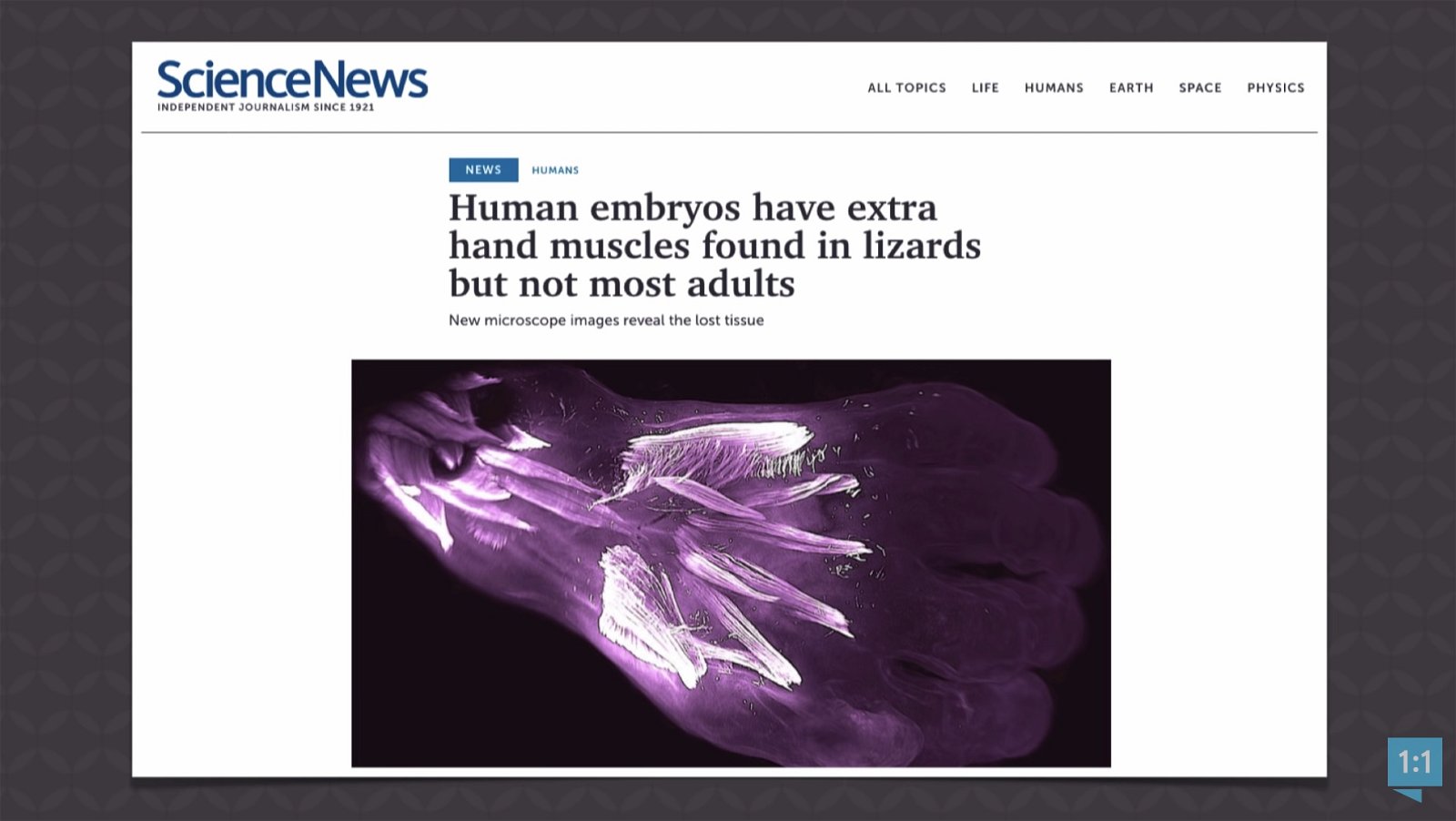 You may have seen headlines recently with phrases like “lizard-men evolution,” “leftovers from our lizard evolution,” or even “human embryos go through lizard stage.” These headlines were reporting on a study that claims that human embryos (babies in the early stages of development) supposedly have muscles not found in adult humans, but are found in lizards. Therefore, these evolutionists believe this is a throwback to 250 million years ago when we shared a common ancestor with lizards. But what does a world-class anatomist who specialized in embryology have to say about this research? Well, he summed it up in one word: “rubbish.”

Dr. David Menton of our staff taught anatomy at the Washington University School of Medicine for over thirty years, retiring as an associate professor emeritus. Dr. Menton earned his PhD in biology from the prestigious Ivy League School Brown University. He’s an expert in his field. After retiring, he joined the staff here at Answers in Genesis and serves as a researcher. He is a very popular speaker and workshop leader.

Dr. Menton explained that, since muscles are the result of the fusion of muscle cells throughout development, attempting to build an evolutionary case is simply not possible. He added that it’s very difficult to determine where one muscle ends and another starts. (In fact, that’s why there is no scientific consensus on how many muscles we have.) For example, the gluteus medius muscle moves the leg and fans in three directions to move the leg in various directions; so, is it one muscle or three?

Dr. Menton went on to say,

Evolutionists have historically used embryology to try to support their idea, going back as far as the 1700s—before even Darwin. But embryology tells us how something develops, not how the process of development itself formed. In this case, these researchers looked at presumably aborted human embryos up to thirteen weeks gestation and found that there are about thirty muscles in the hand, when there are about 19 muscles in the adult human hand. They claim that these are vestigial leftovers from our evolutionary ancestors. This is simply not true.

Muscles form from embryonic mesoderm, which develop into cells called myoblasts. These myoblasts then fuse into myotubes which then fuse into muscle fibers and form muscles. Where do you start counting? The adult human has anywhere from 640–850 muscles. The exact number depends on who is doing the counting. How do you claim that embryos have more hand muscles than adults when there is no firm number of muscles in the body? And even if there are muscles lost, programmed cell death is part of development. (It is called apoptosis and occurs in many bodily tissues, including splitting the hand into fingers and in brain development.)

No, human embryos don’t go through a so-called lizard stage in the womb.

No, human embryos don’t go through a so-called lizard stage in the womb. There is no lizard-men evolution. The idea that we go through (i.e., recapitulate) our supposed evolutionary ancestry in the womb is a tired old belief I was taught in school that simply isn’t supported by the evidence. It’s an evolutionary interpretation imposed on what we observe.

I discussed this item on Monday on Answers News with cohosts Avery Foley and Bodie Hodge. Answers News is our weekly news program filmed live before a studio audience here at the Creation Museum and broadcast on my Facebook page and the Answers in Genesis Facebook page. We also covered the following topics: