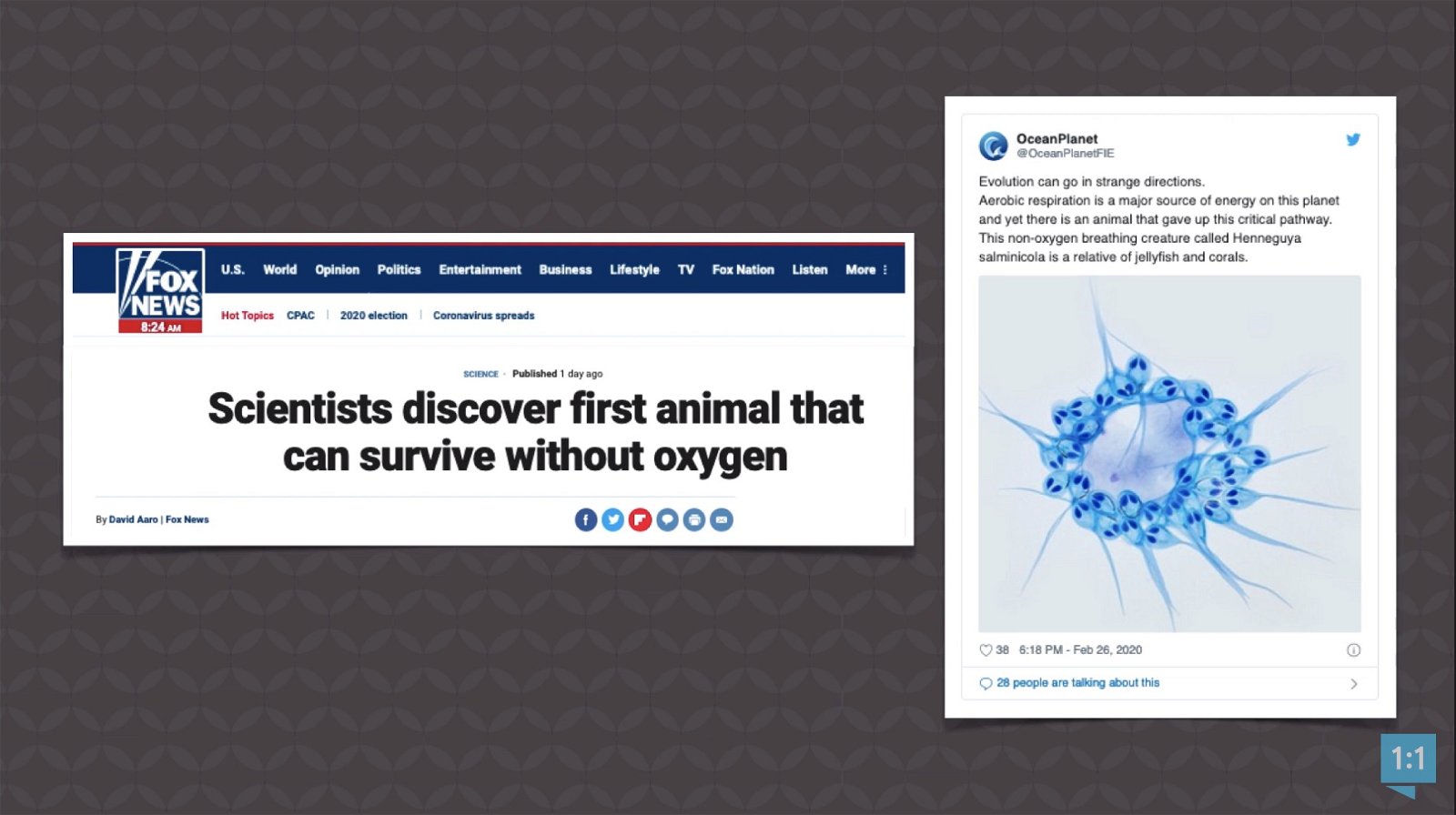 A team of researchers at Tel Aviv University in Israel decided to take a closer look at a common salmon parasite called Henneguya salminicola to determine how it could survive in low-oxygen salmon muscle tissue. What they found was startling—H. salminicola does not need oxygen at all! While there are single-celled bacteria that don’t need oxygen, this is the first multicellular organism they’ve found that doesn’t utilize oxygen.

This parasite is in the same phylum as corals, jellyfish, and anemones, and it even has what looks like typical stinging cells, except H. salminicola doesn’t use them to sting, but rather to affix themselves to their host. In attempting to learn this parasite’s secrets, the researchers used deep sequencing and fluorescence microscopy to conduct a close study of H. salminicola’s DNA and found that it has no mitochondrial genome. They believe it lost it. Because of this, researchers say it lost the capacity for utilizing oxygen, and also claim it’s lost almost all of the genes involved in transcribing and replicating mitochondria. Mitochondria are often called the powerhouse of the cell because they produce the substance that cells use for energy.

While the researchers still haven’t figured out how this parasite gets its energy, they postulated it could be leeching it from its host. But that's still undetermined. Dorothée Huchon, a zoologist at Israel's Tel Aviv University and one of the contributing authors of the study, had some interesting takes on their new find. In a news release for Tel Aviv University, Huchon stated:

It may be drawing it [energy] from the surrounding fish cells, or it may have a different type of respiration such as oxygen-free breathing which typically characterizes anaerobic non-animal organisms. . . .

It is generally thought that during evolution, organisms become more and more complex, and that simple single-celled or few-celled organisms are the ancestors of complex organisms, but here, right before us, is an animal whose evolutionary process is the opposite. Living in an oxygen-free environment, it has shed unnecessary genes responsible for aerobic respiration and become an even simpler organism.

Now, in their journal paper submitted to PNAS, the authors were able to put the usual evolutionary spin on H. salminicola.

Our discovery confirms that adaptation to an anaerobic environment is not unique to single-celled eukaryotes, but has also evolved in a multicellular, parasitic animal. Hence, H. salminicola provides an opportunity for understanding the evolutionary transition from an aerobic to an exclusive anaerobic metabolism.

But once again, we see the bait-and-switch tactic of equating adaptation, mutation, and natural selection with molecules-to-man evolution.

But once again, we see the bait-and-switch tactic of equating adaptation, mutation, and natural selection with molecules-to-man evolution. If this parasite is losing genetic information and can only survive by presumably siphoning energy from its host, then this is not evolution, but a created kind which, in a fallen world, has adapted to parasitic life. Also, as one science writer stated, “they have basically devolved from a free-living jellyfish ancestor into the much more simple parasite we see today.” Really, what we’re seeing is the opposite of an evolutionary process.

This item was discussed on Monday on Answers News with cohosts Drs. Georgia Purdom and Gabriela Haynes. Answers News is our weekly news program filmed live before a studio audience here at the Creation Museum and broadcast on my Facebook page and the Answers in Genesis Facebook page. We also covered the following topics:

Watch the entire episode of Answers News for March 2, 2020.