What Would Earth Look Like Without Water? (And How Does It Relate to Creation?) 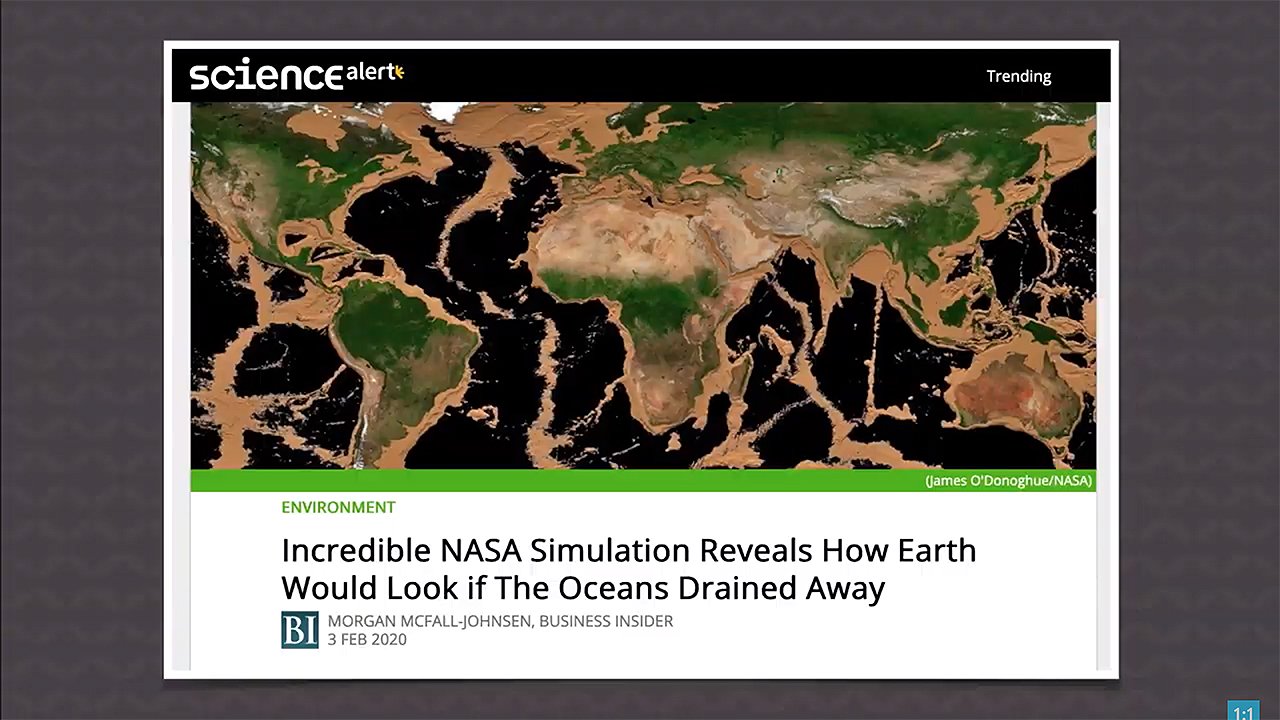 From space, the earth is a beautiful blue and green sphere. Of course, that’s not surprising—our planet is 70% covered by water. But what would you see if all the water was whisked away? A planetary scientist formerly at NASA recently remade a 2008 video that shows how the earth would appear if the oceans evaporated (it’s a pretty incredible video). But what does this have to do with creation?

Well, the scientist, James O’Donoghue, says in an article about the video:

“I slowed down the start since, rather surprisingly, there's a lot of undersea landscape instantly revealed in the first tens of meters. . . ”

The continental shelves include some of the land bridges that early humans crossed as they migrated from continent to continent. Tens of thousands of years ago, our ancestors could walk from continental Europe to the UK, from Siberia to Alaska, and from Australia to the islands surrounding it.

“When the last ice age occurred, a lot of ocean water was locked up as ice at the poles of the planet. That's why land bridges used to exist…Each of these links enabled humans to migrate, and when the ice age ended, the water sort of sealed them in.”

Now, creation apologists have taught for years that the post-flood ice age lowered ocean levels and enabled people to move to different places over land bridges (e.g., a land bridge would’ve formed between Asia and North America in what’s now the Bering Strait). Evolutionists believe the same basic model, but they always slow things down to hundreds of thousands or millions of years because of their worldview.

But, no, it wasn’t “tens of thousands of years ago” that our ancestors used land bridges to move around the world. People and animals were also distributed by boat as people migrated as well.

It all happened quite quickly over hundreds of years! This is because the flood was followed by a catastrophic ice age.

It all happened quite quickly over hundreds of years! This is because the flood was followed by a catastrophic ice age. This would have dramatically lowered global sea levels, exposing these land bridges allowing people to move across them. As the ice age waned and the glaciers melted and retreated, sea levels rose, and these routes between continents and islands were cut off.

The video from O’Donoghue really does give you a great idea of how these land bridges could have formed after the flood. So, he’s right that “emptying the seas unearths ‘not only the ocean bottom, but also the ancient story of humanity’”—just not in the way he thinks!

This item was discussed on today on Answers News with cohosts Avery Foley, Dr. Gabriela Haynes, and Bodie Hodge. Answers News is our weekly news program filmed live before a studio audience here at the Creation Museum and broadcast on my Facebook page and the Answers in Genesis Facebook page. We also covered the following topics:

Watch the entire episode of Answers News for February 13, 2020.