Is Having a Baby “Pure Environmental Vandalism”?

Vogue magazine suggests new parents are guilty of “environmental vandalism” for having children and doesn't acknowledge that climate alarmism is rejected by some left-leaning pols. 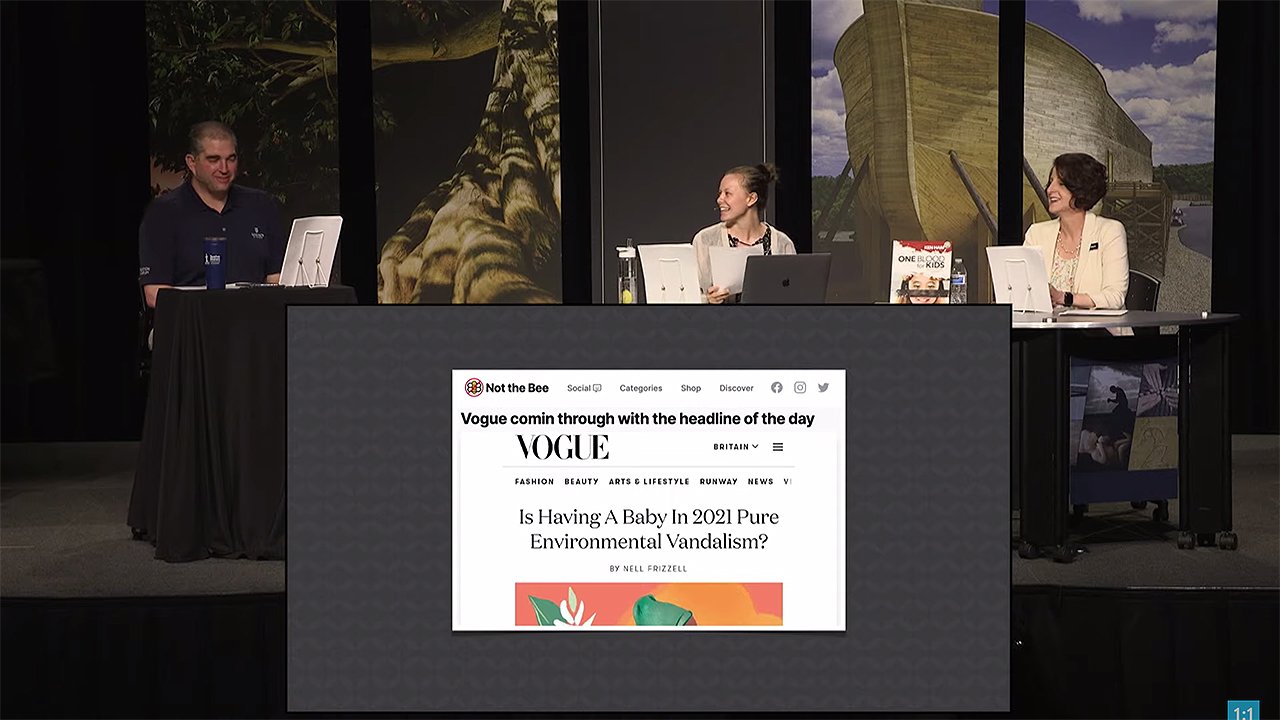 If you never learn to drive, don’t buy a dog, and never buy a new pair of jeans, can you have a baby? Well, the author of a recent Vogue article says . . . “maybe.” The article was titled “Is Having a Baby in 2021 Pure Environmental Vandalism?” In it, the author—a self-described “scientifically-engaged person”—shares how she “worried feverishly” about the strain of a baby on the planet and if her child would want to live in a world where “we have perhaps just another 60 harvests left before our overworked soil gives out and we are running out of fresh water.” In the end, she says she had a baby, and would like another, but she will raise her child with an awareness of “ecological equality.” Of course, if her mother had ever thought the same way, this ridiculous article wouldn’t even exist!

But is her hysteria and handwringing justified? Well, the day before her piece was published, the New York Post published an excerpt from an upcoming book written by the former undersecretary of science for the US Department of Energy during the Obama administration, Steven E. Koonin. He soberly shared how he’s “watched with dismay as the public discussions of climate and energy became increasingly distant from the science.”

Due to bias, agendas, and the way “science” filters to the public (particularly through the media), “phrases like ‘climate emergency,’ ‘climate crisis’ and ‘climate disaster’ are now routinely bandied about to support sweeping policy proposals to ‘fight climate change’ with government interventions and subsidies.” But is this all justified?

Koonin says no. He writes,

Yes, it’s true that the globe is warming, and that humans are exerting a warming influence upon it. But beyond that — to paraphrase the classic movie “The Princess Bride” — “I do not think ‘The Science’ says what you think it says.”

For example, both research literature and government reports state clearly that heat waves in the US are now no more common than they were in 1900, and that the warmest temperatures in the US have not risen in the past fifty years. When I tell people this, most are incredulous. Some gasp. And some get downright hostile.

These are almost certainly not the only climate facts you haven’t heard. Here are three more that might surprise you, drawn from recent published research or assessments of climate science published by the US government and the UN:

He’s right—most people are not aware of such information. He himself was unaware until about seven years ago when he was asked to lead a workshop that would “‘stress test’ the state of climate science.” He realized “climate science was far less mature than [he] had supposed” and, instead, the evidence shows:

Humans exert a growing, but physically small, warming influence on the climate. The results from many different climate models disagree with, or even contradict, each other and many kinds of observations. In short, the science is insufficient to make useful predictions about how the climate will change over the coming decades, much less what effect our actions will have on it.

That’s certainly not something most people are aware of! And yet it makes sense when you consider climate change through the lens of Scripture. Earth’s climate hasn’t been stable since the last ice age (conventionally dated 10,000–12,000 years ago, but creationists would place its maximum age to a few hundred years after the flood—and as a result of the flood). Our planet was rocked by a global flood just 4,350 years ago, then followed by an ice age. The ice sheets don’t contain records of the climate from past eons—they were formed during the post-flood ice age and are very young.

Most of the younger generations have not looked at the past records for themselves. They haven’t understood there have been times in various regions of massive droughts, floods, hurricanes, etc.

Most of the younger generations have not looked at the past records for themselves. They haven’t understood there have been times in various regions of massive droughts, floods, hurricanes, etc. The issue is so much more complex than most people realize.

Climate hysteria isn’t justified. As Christians, we should care for God’s creation, study it wisely through the lens of God’s Word, and rest in his promise that seedtime and harvest, summer and winter, cold and heat, day and night will continue until Christ comes again (Genesis 8:22).

This item was discussed today on Answers News with cohosts Avery Foley, Roger Patterson, and Dr. Jennifer Rivera. Answers News is our twice-weekly news program filmed live before a studio audience here at the Creation Museum and broadcast on my Facebook page and the Answers in Genesis Facebook page. We also covered the following topics:

Watch the entire episode of Answers News for May 3, 2021.