Image by Lukem99, via Wikimedia Commons. 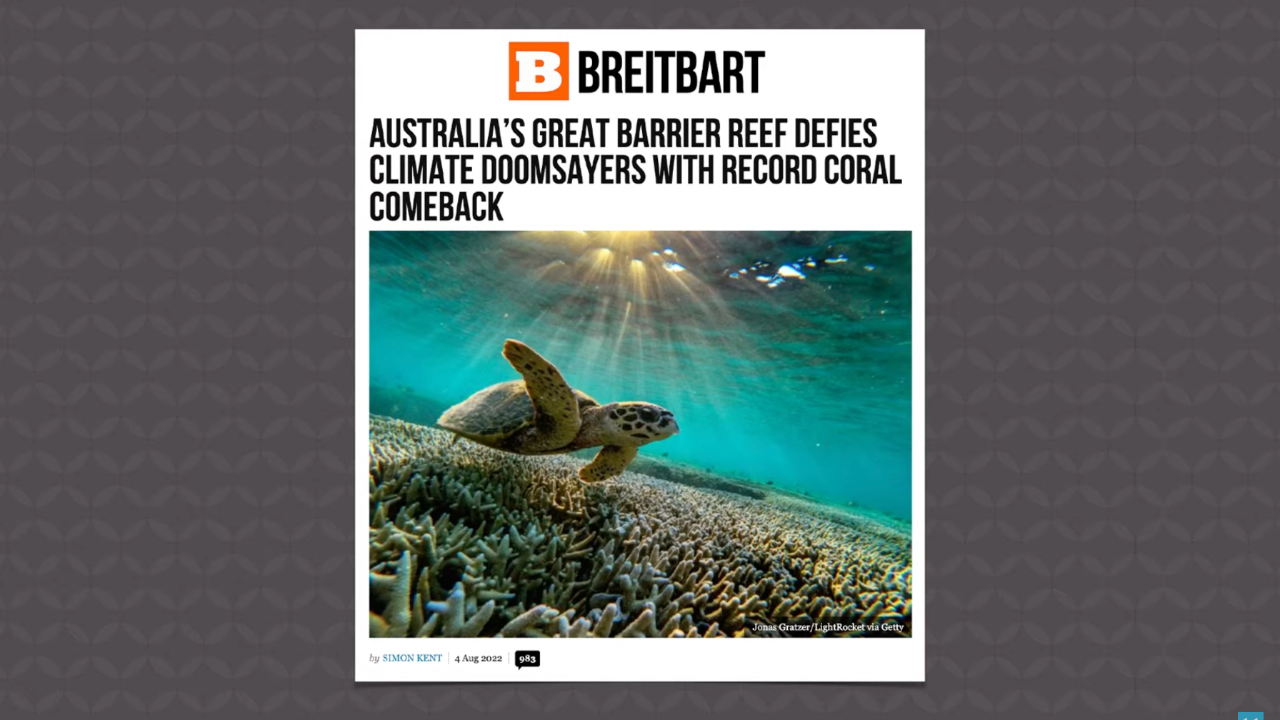 Australia’s Great Barrier Reef is an internationally famous icon. The colorful corals, variety of creatures, and undulating waves make a massive, jaw-droppingly beautiful environment that can even be viewed from space. Now, environmental activists have been saying for decades that the reef is on the edge of collapse, but—defying their predictions—the reef just had a record growth year.

Coral cover on two-thirds of the iconic reef, which is seen as a bellwether of ocean health, has reached its highest level since records began 36 years ago.

Now this seems like it should be good news, right? Well, the scientists say don’t get too excited:

The Australian Institute of Marine Sciences (AIMS) said in its annual report the reef is vibrant and flourishing although challenges do remain for such a “resilient system” that “still maintains that ability to recover from disturbances” . . .

“But the worrying thing is that the frequency of these disturbance events are increasing, particularly the mass coral bleaching events,” he continued . . .

Each time the reef has managed to fully recover and generate growth lost to natural challenges as nature’s resilience triumphs over natural setbacks . . .

The Great Barrier Reef Marine Park Authority, which manages the reef, says despite the latest positive news the outlook for the icon is “very poor” due to “climate change.”

Translation: scientists in Australia admit the Great Barrier Reef is doing very well, is very resilient, and the doomsday predictions of the climate change religionists of the past didn't happen. But don't let that stop you from thinking climate change won't destroy it in the future!

Ever since the global flood, climates have been changing and will continue to do so.

When I was a high school student in Australia, we were told the reef would be destroyed in my lifetime, but it has not—it's doing great! Ever since the global flood, climates have been changing and will continue to do so. Don't get sucked into the anti-God climate change religion of our present day. Climate change will continue as we live in a post-fall, post-flood world. But regardless, God promises:

While the earth remains, seedtime and harvest, cold and heat, summer and winter, day and night, shall not cease. (Genesis 8:22)

This item was discussed Monday on Answers News with cohosts Dr. Kaia Kloster, Bodie Hodge, and Dr. Jennifer Rivera. Answers News is our weekly news program filmed live before a studio audience and broadcast on my Facebook page and the Answers in Genesis Facebook page. We also covered the following topics:

Watch the entire episode of Answers News for August 15, 2022.