Dinosaur Footprints Discovered on . . . the Roof of a Cave? 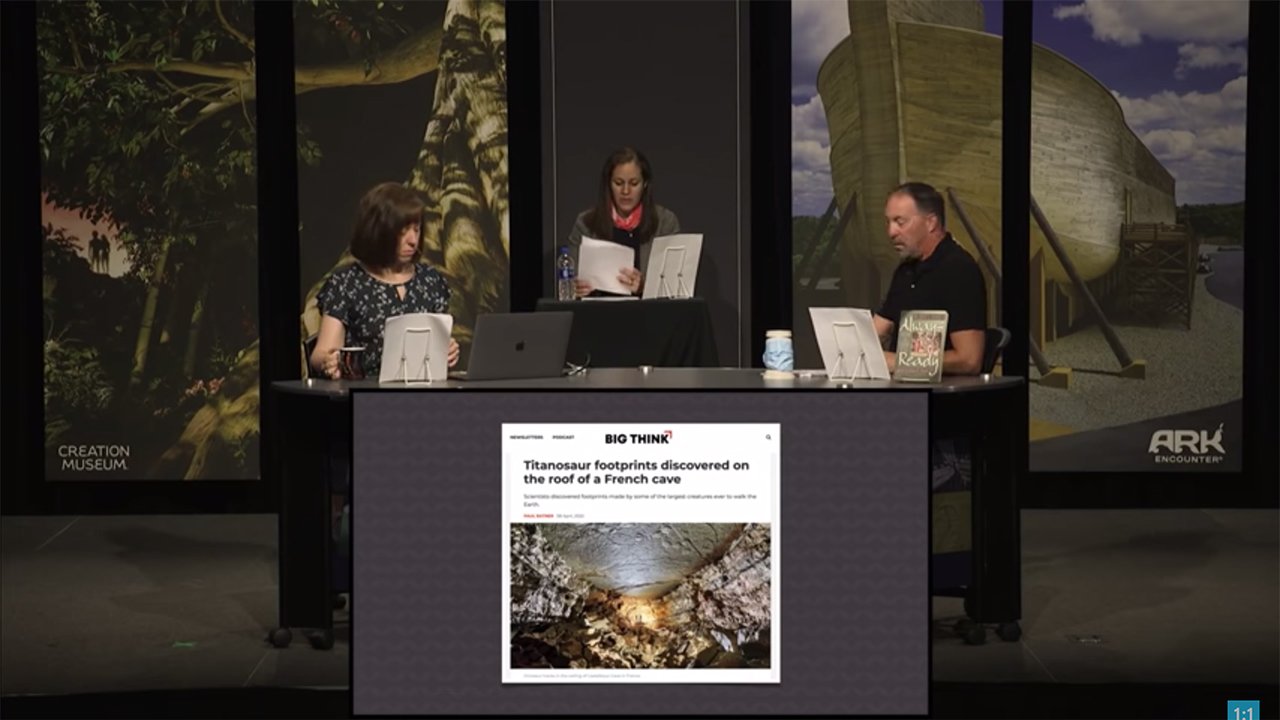 If you were hunting for dinosaur footprints, it probably wouldn’t occur to you to look up—but that’s exactly where a team of researchers discovered a trackway of the footprints of a titanosaur (long-necked sauropod). In Southern France, researchers were crawling through a labyrinth of cave passages and discovered the prints, 1,640 feet underground.

The researchers discovered 38 tracks, some of which were four feet long (now that’s one big dinosaur!), likely made by three of the giant creatures.

The researchers discovered 38 tracks, some of which were four feet long (now that’s one big dinosaur!), likely made by three of the giant creatures. A popular summary of this find describes the formation of these tracks this way:

They were likely made by three dinosaurs at the time when the area was on the surface, making up a muddy shoreline along which the giant creatures traveled. Over time, the site was buried by geological processes, with the tracks becoming moldings in the roof of a cave that's half a kilometer underground.

The abstract of the technical paper adds, “Some of the tracks are extremely well preserved and show impressions of digits, digital pads, and claws.” According to evolutionary thinking, these tracks are 166–168 million years old.

Now, consider what happens today when a creature walks along a muddy shoreline. They leave behind footprints, obviously. But do these footprints routinely become “trace fossils”? No! Why not? Because they are quickly eroded away. In order for footprints to be preserved as trace fossils, they must be buried quickly before they can erode. “Over time . . . geological processes” normally don’t bury and fossilize prints—they eliminate them!

These fossils are not only preserved, some of them are preserved so well that the researchers could see delicate impressions.

But these fossils are not only preserved, some of them are preserved so well that the researchers could see delicate impressions. This doesn’t point to slow and gradual processes or the fossils existing for 166 million years! Instead, it points to a catastrophe that could rapidly bury these tracks. Clearly something out of the normal happened. And that, we believe, was the catastrophe of the global flood of Noah’s day. The Bible explains what we see in the world.

This item was discussed yesterday on Answers News with cohosts Dr. Georgia Purdom, Dr. Gabriela Haynes, and Bodie Hodge. Answers News is our weekly news program filmed live here at the Creation Museum and broadcast on my Facebook page and the Answers in Genesis Facebook page. We also covered the following topics:

Watch the entire episode of Answers News for June 8, 2020.